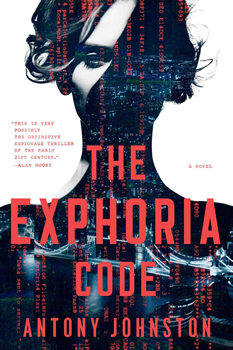 Antony Johnston is no stranger to the fictional world—even if you’ve never read any of his work, or haven’t played one of his video games, you’re likely to recognize one of his most famous characters.

The blockbuster movie Atomic Blonde, starring Charlize Theron, is based on one of Johnston’s graphic novels—and while it certainly enjoyed commercial success, Johnston is hoping his latest project will earn him similar accolades in the book world.

THE EXPHORIA CODE, featuring another kick-ass heroine in Brigitte (Bridge) Sharp, is a heart-pounding thriller that combines old world spycraft with modern cyber technologies to kick off a series guaranteed to bring espionage back to the forefront—and give readers a new character to root for.

Bridge, an M16 cyber-analyst, has been on desk duty for the past three years after her first field op went tragically wrong. Still reeling from the death of her fellow officer, Bridge is reluctant to get back into action—until her best friend is murdered. Bridge must now go undercover inside a top-secret military project called the Exphoria Code to find a mole—and hopefully, her friend’s killer.

But of course, in the world of espionage, nothing is ever as it seems.

In his first-ever interview with The Big Thrill, Johnston shares insight into the importance of this book, what’s next for Bridge, and the secret behind writing those tight action scenes.

First off, these are some challenging times. How are you and your family holding up?

We’re doing OK, thanks for asking. Being a writer I spend most days at home anyway, but there’s no denying things are mentally exhausting. All things considered, though, we’re able to cope with all this better than most, and at least I can work. I really feel for people who are at risk, or can’t earn a living right now. 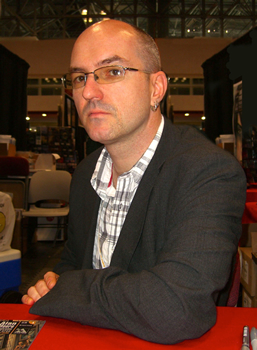 You’ve primarily written comics and graphic novels (and created a near perfect character with Atomic Blonde) but you’re treading into fresh water with THE EXPHORIA CODE. Can you share a little about what this novel means to you?

It’s not quite my first prose work—my first published fiction was an illustrated novella (which won an Independent Publishing award) and I’ve written commissioned books.

But THE EXPHORIA CODE is my mainstream debut, and the first thing I wrote following Atomic Blonde, so it holds a special place in my heart. I really wanted to write something completely modern, but paying homage to classic spy fiction. Computers have changed the world of espionage in unimaginable ways since the 1980s… and yet, in many other ways, little has changed. That clash of old and new is at the core of the book, and of its heroine.

In Brigitte Sharp, you’ve created another kick-ass character. What can you tell us about her genesis?

I created Brigitte as a contrast to the traditional square-jawed male spy. She’s paranoid and insecure, especially after the disastrous field mission that left her chained to a desk. She’s also niche and unusual in her tastes and lifestyle. You’re not likely to see James Bond listening to a Sisters of Mercy CD any time soon, right?

But I also wanted to bring realism to the “cyber-spy” genre. I know a thing or two about computers, and the kind of people who become wizards when they sit down at a keyboard, and I didn’t see anyone in fiction who reflected that accurately. I wanted Bridge to feel very real, then challenge her with a plausible scenario that nevertheless has horrifying implications.

Espionage fiction tends to conform to some rigid parameters, but with THE EXPHORIA CODE you’ve delivered a spy thriller that is layered, told from a female perspective, and is actually believable. Did you set out to push the boundaries in the genre? And if so, what were some of the key things you wanted to convey?

I always try to write the kind of book I want to read, but nobody else is writing. If that means I’m pushing boundaries, so be it. Some people have even called THE EXPHORIA CODE a “literary spy thriller,” because Bridge and her family relationships are an important part of the story. That’s very flattering.

If I wanted to convey anything, it’s that characters matter, even in high-octane thrillers—and their relationships can have huge unforeseen consequences to the plot. My aim was to make readers care enough about Bridge, her allies, and her family that when you truly realize the danger they’re in, it feels like rooting for your own friends. 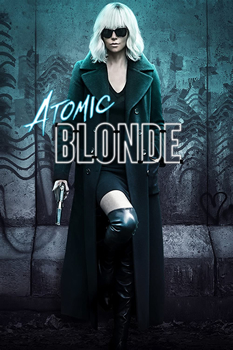 I loved the blend of old-school spy tactics mixed with modern cyber tools. How did you navigate that balance?

With some difficulty! But what I found even more challenging was the “balance of explanation”—making sure that readers who don’t know much about computers or the internet can follow everything, without patronizing readers who do know about that stuff. That’s really tricky, but I hope I pulled it off.

While researching for this book, was there anything that surprised you?

Quite a few things, but many of them would spoil the plot if I told you. One thing I can talk about is how frighteningly advanced drone technology already is. Every time I researched the state of the art, I had to make my fictional drones even more bleeding edge than I’d originally planned. You know how they say modern airplanes almost fly themselves? Well, with modern drones that’s even more true. It’s mind-boggling.

Action scenes can be difficult—you use them sparingly, but effectively. The Big Thrill is as much for aspiring writers as it is for readers. What tips would you give to writers when it comes to crafting those important scenes?

Believe it or not I don’t enjoy writing action scenes, because any experienced combat instructor will tell you that a fight breaking out means you’ve lost control of the situation. I feel like that when I’m writing them, too! When Bridge starts throwing punches, all she’s trying to do is end it as fast as possible and escape, and she’ll use anything at her disposal to do so.

THE EXPHORIA CODE is a taut thriller—the pacing is fantastic. How has your experience with writing comic books helped you to write novels, and vice versa?

Thank you for saying so. I don’t know if I write pacily because of my time in comics, or if I had success with comics because I write pacily, but either way I think it’s just how I conceive and tell stories.

Even when I’m writing a slow burn I try to keep things moving so the reader is never bored, or wondering what a character’s motive is. The key to that is good, complex characters and a clarity of purpose. There are times when Bridge doesn’t know exactly what she’s up against, but we always know why and how she got into trouble in the first place.

Happily, THE EXPHORIA CODE is not the last we will see from Bridge. What can you tell us about Book 2—and perhaps more pressing, when can we get out hands on it?

The Tempus Project sees Bridge heading up a new cross-departmental unit, but things quickly go bad when a whistleblowing Estonian journalist is killed under her protection. Outcast and hunted by friend and foe alike, Bridge has to figure out what a hacker called “Tempus” wants with politicians’ emails, how an African militia is trying to blackmail the government, and why the CIA is kicking down her door!

Tempus is already out in the UK, and hopefully Pegasus will publish it in the US too. Of course, the best way to make that happen is for everyone to buy THE EXPHORIA CODE! And I’m currently outlining a third Brigitte book, but my lips are sealed as to details.

I also have a nonfiction book out this month called The Organized Writer, which is a productivity system I designed especially for writers, and have been using myself for more than a decade. It’s about taking control of your calendar and schedule, juggling multiple projects, and focusing better so you can hit all your deadlines.