A Convoluted Conspiracy of “Biblical Proportions” 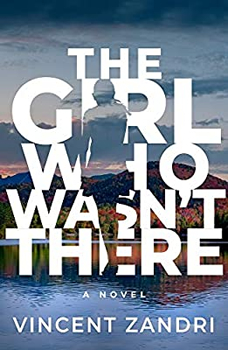 For Vincent Zandri, even the smallest incident can spark a grand idea. The author of 45 novels and novellas says a trip to the grocery store began innocently when his cart collided with another. On the way home, he imagined a story in which the victim “gets angry and demands an apology. The apology isn’t enough. He follows you out of the store, all the way home, and thus begins a train wreck of one psychotic circumstance after the other.”

When an idea like this hits, Zandri says sometimes he sits down to write and “some invisible force takes over. Before I know it, I’ve written 1,000 words. A half-hour or 45 minutes will have passed, but it seems like seconds.”

In his latest novel, THE GIRL WHO WASN’T THERE (Oceanview Publishing), ex-con Sidney “Doc” O’Keefe’s daughter disappears from the beach at Lake Placid while her parents’ backs are turned. Sid and his wife Penny are enjoying their first intimate moment in 10 years after he is paroled from a life sentence for murder. The couple left their precious daughter, Chloe, with another family, but suddenly, she’s gone. Sid believes his old crime boss, Mickey Rabuffo, wants payback, but the local police believe Sid is behind it all. To find Chloe, Sid will have to take the law into his own hands and unearth a convoluted conspiracy of “biblical proportions.”

The idea came from enormous personal pain, Zandri says. “Back in 2012 my second wife, Laura, and I, who divorced many years ago, decided to give the relationship another try since we’d remained very close although we were apart. We have a daughter together and this was a great chance for me to be a real hands-on dad again. One of our favorite places to visit was Lake Placid, and one of our favorite hotels is the one depicted in the novel.” 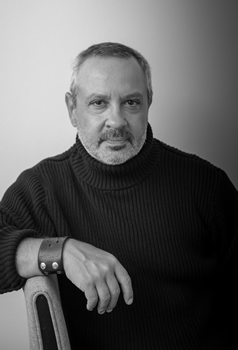 Then the relationship ended, “and just like that, my family was living apart from me again. It was a bit of a blow, as you can imagine. I guess writing GIRL helped me better understand the emotions I was going through at the time, from a psychological point of view anyway. Hey, it was better than hitting the bottle.”

Zandri says he likes to write about characters who are “up against it all.” Not only is Sid an ex-con, he was the driver in a quadruple murder. The two hit men were killed, so Sid took the rap and went to jail for life. He lost his dream of going to medical school and established a well-deserved violent reputation in prison. Then he was offered the “deal of the century” in exchange for his freedom. Not only does Sid have to find his daughter, he has to overcome his past.

Zandri likes to model his characters after real people, including himself. “There is a lot of me in Sidney O’Keefe…the weight lifting, the physical description, the love for his daughter, his willingness to sacrifice his life for her if necessary. Penny, his wife, was based more or less on my daughter’s mom…same physical characteristics and even some of her dialogue. Singh and Ike are two of my great friends from military high school back in the late ’70s and ’80s. Wemps is actually Eric Wemple of The Washington Post.”

Using high school and college friends as characters is something he does often. “I know them inside and out, and they are real for me, which makes them easy to describe. How do they usually react to my writing about them? They usually issue me a friendly roll of their eyes and say something like, ‘You go, Vin!’” 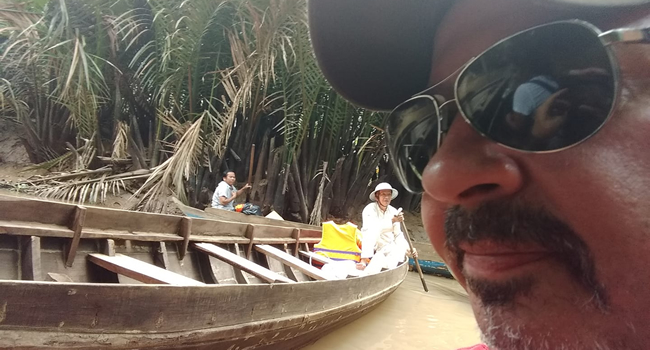 Zandri explores the Mekong Delta in Vietnam in July 2018.

Zandri ratchets up the tension second by second. “I just try to put myself in my character’s shoes. None of us who are parents can truly imagine what it’s like to have a child disappear unless it really happens to you. But by making it real in your mind, you can come real close. The utter helplessness you would feel. The despondency. The panic. The fear. You wouldn’t want to eat anything, because you fear your child might not be eating. All sorts of crazy things would be going through your mind. Is she being tortured or raped? Is she already dead? You carry your phone in your hand and you constantly check it even when you know no one has called or texted. You see her face at every street corner, on every little girl you pass by. You begin to go a little more insane with every minute that passes. Every minute she’s gone. Not even the police can offer a whole lot of comfort because they’re not miracle workers. They can’t just magically make her reappear.”

Outside of his criminal activities, Sid is genuinely a good guy. “Despite the violence that always seems to shadow him, he hates violence. When he was working for the mobster Mickey Rabuffo he even refused to carry a gun. He puts his family first, and when he did hard time, he didn’t dream of finding ways to escape. He escaped in his mind by dreaming of his wife and daughter. Of being with them again one day, even if such a thing seemed impossible at the time.”

Readers of Gillian Flynn and Paula Hawkins will enjoy THE GIRL WHO WASN’T THERE. “So will Harlan Coben readers,” Zandri says. “All three happen to be some of my favorite writers.”

Most of his fans don’t know Zandri was groomed from childhood for the commercial construction industry. “I still recall my dad taking me onto job sites when I was only four years old. He’d make me hold the end of the tape measure while he laid out a building or an addition. But something happened in the fall semester of my second year in high school. I really fell in love with Hemingway and J. D. Salinger. I wrote my first short story for an incredible English teacher named Frank Nash. He read it aloud to everyone as an example of a good, honest story. The rest, as they say, is history.”

Another profound influence on his writing is adventure travel. “At present I believe I’ve been to 33 or 34 countries. All my Chase Baker novels are researched on site, including India, Nepal, Cambodia, Vietnam, Thailand, Egypt, Morocco, Israel, and more. I even made a research jaunt to Chernobyl last November. I also live part-time in Florence, Italy.”

Zandri’s future is bright. And prolific. “I’m working on a big novel right now called American Crimes. It’s about a normally mild-mannered couple who by accident are caught up in a drug war. My latest Chase Baker novel, Chase Baker and the Lost Art of God will be published under my own imprint, Bear Thrills, in November. Down & Out Books will publish Deadly Is the Night in January/February, and Oceanview is publishing Paradox Lake in May 2021. Also in 2021/22 we’ll see another Young Chase Baker novel, a new Jack Marconi PI novel, a new Dick Moonlight PI novel, and a Steve Jobz PI novel. Plus my agent has been in talks with several producers, including Balboa Productions, over the film rights to a few of my books. So lots coming up.”