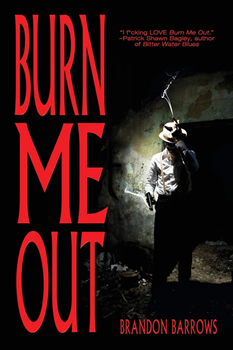 BURN ME OUT is the story of Al Vacarro, a made man, with all the honors and responsibilities that entails—including murder. But after a lifetime of violence in service to the Castella crime family, Al’s past is catching up with him. Neither his present nor future seems to hold any hope for salvation. For the sake of his family and his very soul, he needs out of “the life.”

But how can Al escape the only world he has ever known—one where murder and retribution are part of everyday life? This is a story of blood and desperation, and these are the last 24 hours of life as Al has known it.

Brandon Barrows is the award-nominated author of the occult-noir novel This Rough Old World, as well as more than 50 published stories, some of which have been collected into the books The Altar in the Hills and The Castle-Town Tragedy. He is also the writer of nearly 100 individual comic book issues.

In this exclusive interview with The Big Thrill, Barrows delves into his career and the inspiration behind his latest pageturner, BURN ME OUT.

Did you always want to be an author?

I think I probably did, though I perhaps didn’t realize that until I was much older. When I was a kid, I used to write stories for fun. I stopped some point around middle school and didn’t take it up again until college, but never pursued it professionally until years later.

Tell us something that is not in your bio.

I read the way most people eat—at least one novel a day, generally. Most of my free time is spent reading, as well as any other time I spare to cram some reading in. My wife says I read at an inhuman speed, but it feels normal to me.

What attracts you to this genre?

I like the realism, or perhaps I should say the potential realism, of crime, mystery, and western novels. I spent many years both reading and writing predominantly fantasy and science fiction and horror to the point of burning myself out on it to a degree. I don’t seem to have that issue with crime fiction. I also like finding humanity in “bad” people in fiction, something I tried to portray in BURN ME OUT, particularly with Al Vacarro, the protagonist.

I am a huge fan of Gil Brewer, the crime writer who was most prolific during the ’50s. I don’t know if he’s my biggest influence, but he’s an author whose work I sort of aspire to, in a way. He really had the desperate, futile struggle, the everybody’s guilty but still trying to make it work, that characterizes noir down pat. Most of those characters can’t possibly be construed as good people, but you have to admire the way they keep trying, at least. I like that a lot.

I see you’ve written comics. Has this helped you develop characters?

That’s true—for the first five or six years of my writing career, I was primarily a comic writer, and shifting back to writing prose was a struggle at first. Comics is a visual medium, and part of that is that character development has to be pretty subtly woven into the narrative in a way that fits with the flow of each page while not bogging down the action. Contemplative or pure discussion doesn’t work well on the comics page. In exchange, comic characters each look distinct from each other, so there are other ways you can characterize them. It may be more surface in some ways, but it’s part of the medium. You really have to work with a character long-term in comics to truly develop them.

In writing prose again, I initially felt it was something of a struggle to get across the subtler aspects of characterization because I simply couldn’t find the language and technique. Once I set aside a lot of what I learned from writing comics, I found it easier to get characterization down on the page, weaving it into the story, because you have the freedom to sprinkle things here and there and develop the characters slowly. After all, in a novel, you have a lot more space to work with than you do in, say, a four-issue limited comic series.

What kind of research does it require to write crime fiction?

That’s a tough one to answer. There are some pieces I’ve done little to no research for because it didn’t feel necessary. Others, I’ve spent time reading up on places, particularly any real-world locations I haven’t been to personally that I want to include in the work. I’m of the opinion, though, that too much real-world stuff crammed into a work of fiction can bog it down, so I don’t do too much of that. BURN ME OUT’s location, for example, is never explicitly stated. I imagined a medium-sized Midwestern city, but not a real one, so that gave me the freedom to use whatever locations I needed to without worrying about geography.

It’s very important, because writing is a job and should be treated like one, but the actual routine has changed a lot over the years. For many years, I wrote every day, at a set time, for at least 90 minutes. I found it a struggle to keep it up eventually, though, because many days I was forcing myself to do it and not producing much or not producing much of quality. Eventually, I shifted to set days in which I spent the majority of the day writing and giving myself a day or two in between in which I didn’t feel obligated to write. I still do on those days if something needs to be done or if I otherwise feel the need, but I don’t force myself. Giving myself breathing room has helped immensely and gives the work time to get better, both on the page when I have a day or two’s distance from it and can revisit with fresher eyes, and in my own head.

What advice would you give to aspiring authors?

Read—a lot. I’ve talked to many people who say they want to write, but claim they don’t really like to read. I don’t know how they expect that to work. You can’t be a writer and not love the written word. Exposing yourself to many different people’s ideas and styles will not only give you inspiration, it’ll give you an idea of what works and what doesn’t—both for you and in general. I’ve read books that had great ideas but poor execution, and I’ve read books that were excellently written but the idea was boring or perhaps simply not for me personally. Learning what works for you as a reader is a critical part of discovering what kind of writer you want to, and can, become.

What do you hope your readers will take away from BURN ME OUT?

I’m hoping they’ll take two big things away from it: One, that no matter how bad things are, there’s always a way forward. It might not be obvious and it might not be the one you would pick in a perfect world, but there’s always a way. Two, that we’re all human. We all have flaws and some are greater than others, and we all make decisions, good and bad, and some of those are worse than others, but at the end, we’re all human beings just doing the best we can.

Do you plan on continuing a series for the characters in BURN ME OUT? Will Al Vacarro be part of future stories?

I honestly don’t know. Another story about Al would have to be something I felt very strongly about doing, something that I needed to do very badly. At the moment, I don’t have such an idea.

Brandon Barrows is the award-nominated author of the occult-noir novel This Rough Old World as well as over 50 published stories, selected of which have been collected into the books The Altar in the Hills and The Castle-Town Tragedy. He is also the writer of nearly 100 individual comic book issues. He is an active member of the Private Eye Writers of America.