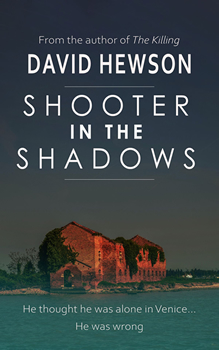 A man alone, in a foreign land, pursuing a killer, and running out of time. If that sounds like the formula for intense suspense, then you’ll understand why David Hewson’s newest novel, SHOOTER IN THE SHADOWS, is well worth reading.

This international thriller follows Tom Honeyman, a reporter who solved an ugly double murder in his hometown in New York State. His book about the case made him rich, but years later a stranger tells him he was wrong. He must find the real murderer in just four days.

As the author explains, Honeyman is a documenter of people and events, constantly observing and recording them in case they might later be of use in his writing.

“If you met him at a cocktail party, I think you’d be initially charmed, then wonder why he kept asking such probing and personal questions,” Hewson says. “He’s a wannabe hero. At the beginning of the events in the story, he’s a reporter at a failing modest newspaper hit by the 2008 crash, desperate to earn more money for his family—fearful he’s going to lose his job, his home, his livelihood.”

Honeyman is willing to do anything to prevent that from happening. Cracking the gruesome murder in his hometown had turned his life around. He left his reporter life behind, wrote an international bestseller based on the case, and bought a writing retreat on a tiny, isolated island in the Venetian lagoon.

Now, a decade later, Honeyman’s in a jam. He made a fortune naming a murderer, and now he must correct his mistake, or he’s dead.  But is he a good enough detective to handle it? Taking a creative approach might just be Honeyman’s secret power.

“I don’t think he sees himself as a detective so much as an agent for truth and knowledge,” Hewson says. “Someone who’s determined to get to the bottom of the story who maybe sometimes decides what the story is first, and after that seeks out the ‘facts’ that support it.”

Hewson was a journalist for 20 years before becoming an author and says he’s known reporters who take the same approach to stories as Honeyman. But nothing in the novel is taken from real-life experience.

“I don’t like mixing fact with fiction,” Hewson says. “Everything about the story is invented, including the mysterious, forsaken island in the Venetian lagoon where Honeyman finds himself trapped.”

One high point of the novel happens near the beginning, when Honeyman arrives at his decrepit, isolated island retreat expecting to be alone for a week to work.

As Hewson explains, “Almost immediately, his laptop bursts to life, playing a video that takes him back to a decade earlier when his life changed. Then a walkie talkie screeches from a drawer with a message—You’re not alone. That would scare the hell out of me in real life.”

Venice as a setting fits this story like a glove. When a movie of his book opens at the Venice Film Festival, Honeyman is flush with money, and he’s suckered into buying a tiny remote island no one wants—Hemingway used to write nearby.

“He’s fallen for the old myth that writing depends on spells and talismans, not hard work, inspiration, and luck,” Hewson says. “He thinks that absolute isolation is the key to creativity, and that part of the Venetian lagoon is as isolated as it can be. As it happens, I hole up in Venice to finish every book too, but in an apartment in the center where I’ve yet to meet a homicidal maniac bugging my laptop. Maybe next time…”

Over the years, Hewson has written series set in Italy, Copenhagen, and Amsterdam. He says it’s great to develop a family of characters across a number of books, but he doesn’t like the idea of writing series stories alone, or being trapped into one kind of book.

“SHOOTER IN THE SHADOWS is my stab at a very twisty, modern thriller which has the collapse of family life under economic pressure and individual ambition at its heart,” Hewson says. “Honeyman doesn’t just want to save his family. He also wants to be a great writer at any cost. That’s a one-off, I think, not something that would suit any of my series books.”

Nonetheless, SHOOTER IN THE SHADOWS is a thriller at its heart, and Hewson says the secret to keeping a thriller thrilling is as simple as it is difficult to execute.

“Always let the reader start to guess where they’re headed, and always make sure they’re wrong.”

David Hewson is the author of more than thirty books including the award-winning Nic Costa series set in Italy and the acclaimed book adaptations of The Killing TV series set in Copenhagen.

An early pioneer of audiobooks, he won the Audie for best digital original work in 2018 for an adaptation of Romeo and Juliet narrated by Richard Armitage.