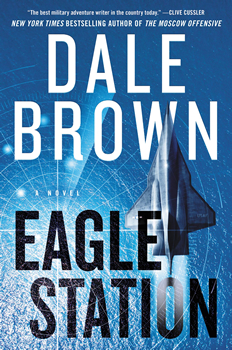 If you’ve been eagerly anticipating the next Brad McLanahan novel, your wait is over—Brad is back, protecting America to the moon and back, in Dale Brown’s latest soon-to-be blockbuster, EAGLE STATION.

In this new geopolitical adventure from the dean of techno-thrillers, Brad McLanahan and the Space Force battle to protect our freedom when our enemies band together against us. Brad beat the Russians in an earlier bid for world dominance, but now they’re working to gain control of outer space with cutting-edge weaponry and a new ally: China.

McLanahan is the point man to face this new alliance, a man whose unique upbringing has positioned him perfectly for the role.

“His mother, Wendy, was murdered by a Russian special operations officer,” Brown says. “His father, Patrick, is the world’s greatest strategic bombardment expert since Curtis LeMay, but no one knows of that because of the highly classified work he does. Brad was mostly raised by his grandmother and aunts.”

Brad is the very essence of a hero, although he wouldn’t say so. As Brown says, “My opinion is that anyone who sees himself as a hero is definitely not one.”

Brown’s fiction has consistently been one step ahead of the rest of us, so it’s no surprise that Brad is working with the US Space Force. In reality, the Space Force is barely a year old. But Brown has been writing about a separate branch of the military focused on space for many years. He called it the US Space Defense Force in 2007’s Strike Force.

“I’ve written about a military presence in space since Silver Tower in 1988,” Brown says. “Space is the ultimate high ground, and it was only a matter of time before the military dedicated a separate branch of the service to space.”

Brad leads the American forces against an unlikely team-up of vicious and determined villains: Mikhail Leonov of Russia and Li Jun of China.

“Even though they are rivals, especially in space, both men intensely hate America and would do anything to see the US crippled and on the defensive so they could seize global power for themselves,” Brown says.

To protect the free world from the Russians and the Chinese, the Americans plan to mine the moon of Helium-3, the resource that will allow them to fully exploit the fusion power technology Brad and his team captured from the Russians. So even though Brown has been writing about space for years, he had to do a lot of research about the moon to keep this book as realistic as its nearly two dozen predecessors.

“Doing techno-thrillers means doing a lot of research,” Brown says, “but it’s a chore I enjoy. My partner Patrick Larkin has been especially helpful here.”

In EAGLE STATION Leonov and Li have devised a daring plan. They are building a joint secret base on the far side of the moon, defended by a Russian plasma railgun that can destroy any spacecraft coming into lunar orbit. If the heavily armed base becomes operational, it will give America’s enemies control over the future of our planet.

It may sound like science fiction but like all of Brown’s previous novels, the technology he writes about is stuff he has read about in open sources, like technical magazines and websites such as the Pentagon’s Defense Advanced Research Projects Agency.

“It may only exist as a concept or proposal for industry or universities,” Brown says, “but very often these proposals get produced and deployed several years later. These days the state-of-the-art advances a generation in only two years, so I wouldn’t be surprised if the stuff I write about that seems far-fetched is being tested in a secret lab somewhere right now.”

Remember that Brown was writing about things like GPS and laser- and TV-guided weapons long before Desert Storm. They were considered science fiction back then. Now they’re commonplace. But while he has a sharp eye for the future of high-tech warfare, Brown is less certain about the future of Brad McLanahan and his exciting exploits.

“My characters have this annoying habit of turning on me: doing surprising and unexpected things, wanting to do or say whatever they want, not afraid of tinkering with things,” Brown says. “I put Brad in the Air Force Academy, and he managed to get himself kicked out. I got him a job at a little aviation company in Nevada and before I know it, he’s flying an experimental bomber in China and a spaceplane in Earth orbit.”

For now, we have to count on Brad and his team in the Space Force to use their cunning, their skill, and their high-tech weaponry to defeat the evil alliance and destroy the enemy moon base. You’ll want to read EAGLE STATION as soon as it’s released to see how they do it.