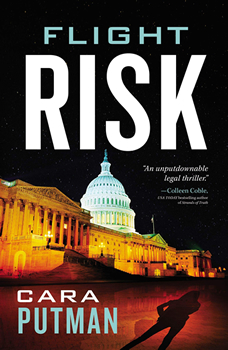 In her ambitious new novel, author Cara Putman takes on so many topics that this thriller is hard to classify. The story touches on human trafficking, the issue of fake news, the consequences of social media, and even alcoholism within families. Where to begin?

“It is hard to put it into a box,” Putman says. “I would call it a legal romantic suspense. It wasn’t a book where I set out to make a statement. It started out more with the theme of ‘Finding truth in a fake news world.’”

In FLIGHT RISK, attorney Savannah Daniels is struggling with her small practice when several worlds collide. First, her ex-husband is accused, along with a famous baseball player, of taking part in sex tourism in Thailand. Next, there is a terrible plane crash in Washington and her former husband was a passenger on that plane. Savannah’s most important legal client becomes embroiled in the crash due to their black box flight recording software. However, her biggest collision may turn out to be with journalist Jett Glover, who wrote the article about her ex-husband. Both Savannah and Jett—who are drawn almost inexplicably together—soon find that the truth may fall between the lines of that article.

“A lot of my book ideas come from headlines,” Putman says, adding that FLIGHT RISK was inspired in part by reading about a baseball player involved in a storyline very similar to the one in the book. “I thought, ‘That is so amazing.’ That kicked everything off.”

But this wouldn’t be a thriller if there wasn’t a twist or two.

“Instead of focusing on the bad things done by wealthy celebrities, we might ask, ‘How much right can they do? They can surprise us with the good,’” she says.

Thrillers require a fair amount of research to make them plausible. Much of Putnam’s research into planes and crash investigations came with help from aviation faculty at Purdue University, where Putman teaches full-time in the Krannert School of Management.

Over lunch at Chipotle on the Purdue campus, she and her colleagues tossed around ideas. “Here we are talking about ways to crash a plane,” she says. “I was waiting for someone to call the police on us.”

Of course, researching such “death and destruction” topics comes with the territory for thriller writers. There has been a time or two after a round of internet research that Putman thought, “Okay, the FBI is going to show up at my door!”

As for the plane crash itself, she says she was living in DC when a plane hit the Pentagon. “A lot of Savannah’s reaction was taken from what we saw on 9/11—straight from having lived through that.”

Putman also watched videos on YouTube of an actual plane crash into the 14th Street Bridge and the Potomac River in 1982.

Stephen King has said that people love to read about work and this novel offers a lot of insights into the inner workings of being a lawyer and also a journalist.

For any reader with a news background, how Jett approaches journalism and the challenges that he faces will seem quite authentic. Putman worked at a local TV news affiliate at one point, so is familiar with the pressures on reporters. “That definitely gives you a feel for deadlines,” she says.

She says that she has tried to make her thriller characters real people, with real jobs—such as a lawyer and a reporter—rather than working in law enforcement.

This begs the question—why do so many lawyers become fiction writers? “The law is very black and white,” Putman says. She holds a law degree and says that fiction is an outlet. Lawyers also learn to be fast and accurate writers.  “The training that you get in law school is so good for writing.”

Putman also writes Christian fiction, so it’s interesting how Savannah shows her faith in the novel by praying from time to time, or invoking God’s blessing in some way. And yet, she moves in a technological and professional world.

“As a Christian myself, it was very natural,” Putnam says. “It would be hard for me to separate God from who I am. He’s kind of a natural part of our lives.”

This is a high-tech world portrayed in a fast-paced and thrilling novel focused on current events. “And yet, God is still part of it,” Putman says. “For Savannah, He is kind of woven into the fabric of her life. If it’s natural to the story it has a place. I don’t want anything that’s going to pull readers out.”

As an author, she also follows tenets of Christian fiction, such as avoiding foul language. “They’re not words I use, frankly!”

Putman is a prolific author, having written more than 30 successful novels, all while juggling a teaching career and a family. What is her writing process?

“It depends on the book,” she explains. She has plotted extensively before, but in this case, FLIGHT RISK was a mix of plotting and exploring where the story and characters go. “Even with my writing, I can go left brain or right brain.”

As for when she does all that writing, she generally works after the kids go to bed, from nine or 10 until midnight. She also writes as time allows during the day, often on campus. “If there’s laundry to do at home, I get distracted,” she says. “If I can have half an hour at Purdue, I can write there. I just get those minutes in where I can.”

Next up for her fans is Lethal Intent, in which the characters from FLIGHT RISK will have a cameo.

Cara Putman is the author of more than thirty legal thrillers, historical romances, and romantic suspense novels. She has won or been a finalist for honors including the ACFW Book of the Year and the Christian Retailing’s BEST Award. Cara graduated high school at sixteen, college at twenty, completed her law degree at twenty-seven, and received her MBA. She is a practicing attorney and teaches undergraduate and graduate law courses at a Big Ten business school.