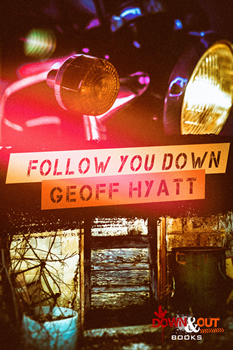 A missing shipment of drugs, an underground ring of camgirls, and the Knights of Satan motorcycle club are all caught in a tangle of deals gone bad with one thing in common: Bree Wells, a small-town teenager who recently vanished into the summer night.

When Deputy Meg Shaw finds a connection between the missing girl and a murdered backwoods drug dealer, she fears the worst. As she follows Bree’s trail, she enters a web of exploitation and violence in a place where everyone has something to hide.

Bree’s heartbroken boyfriend, Russ McCreech, is desperate to be the first to find her. The gentle, youngest son of an outlaw biker family, he won’t quit the search despite their ominous warnings. Soon, he discovers how dangerous it can be to ask the right questions of the wrong people.

FOLLOW YOU DOWN has two point-of-view characters on opposite sides of the law, Russ McCreech and Meghan Shaw, and it didn’t really come to life until I discovered both of them. I always knew Russ: he’s a teenager who is physically and emotionally unequipped for violence and manipulation, yet born into a criminal community. He’s the black sheep of an outlaw family. When his girlfriend Bree disappears, it seems that the only way he has to confront something terrible is by becoming part of this life that he’s always wanted to run away from.

Then I found Meghan. Her point of view is critical to how the novel works. She’s experienced violence first-hand as a military veteran, so she’s equipped for it, but she sees it as destructive and struggles against it. She’s also aware of how corrupt power structures can be, so she distrusts much of the typical law-enforcement mindset. She’s personally invested in finding out what happened to Bree in a different way than Russ. For her it’s not a vendetta but a moral duty, and a chance for the state to do what it’s supposed to do: protect the vulnerable and hold perpetrators accountable. Meg has equal time with Russ in the novel, and the interplay and intersection of these two outsiders in their opposing communities really made it click.

Crime is the place where the moral failings of society and individual failures of character converge. There’s a lot for writers and readers to explore there, and in the context of a mystery or a thriller, it doesn’t have to feel preachy or didactic because it’s an inherent part of the events.

In FOLLOW YOU DOWN a central crime affects the small community of Pike Lake at every level, creating a destructive series of events with unforeseen consequences on both sides of the law. Everyone in the book plays a part in one way or another, some causing more harm than good despite their intentions. It’s an entertaining mystery at its core, but differing definitions of justice and conflicting self-interests add a level of complexity that I hope will be thought-provoking for readers.

The biggest challenge was writing a novel in which characters have an experience that aligns with the genre’s demands in a naturalistic way. An effective mystery novel is a feat of narrative and structural control. In addition to the rigors of pacing and plotting, an author has to track the way information is disclosed to the reader. Readers need all the clues, but not so soon that they can solve it too early, and not so late that they feel tricked. Plus, you have to do all this in a way that doesn’t feel overly contrived. I was a wide-eyed innocent who had no idea what an undertaking that would be when I decided to write this thing, and I gained a new appreciation for the form by doing it.

Hardboiled and noir fiction often deals with moral ambiguity, and I saw this book as an opportunity to have that happen in a contemporary way that fits into a place like Pike Lake, a rural town finding itself steeped in what residents once thought of as “big city” problems. It’s a whodunit, and gritty rural noir, but I did my best to reflect some of the complexities of crime and violence in what I hope makes for a compelling read.

Geoff Hyatt worked as a ghostwriter for a YA horror series before the release of his first novel, Birch Hills at World’s End. Following that, he served as an editor for an independent press while teaching college courses in film and fiction writing. Currently, he scripts online educational courseware and writes content for a toy company.