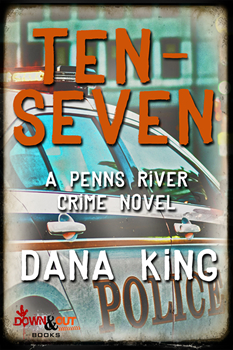 There’s a lot going on in TEN-SEVEN, the latest installment in Dana King’s Penns River series. A murder at the local casino is only one challenge facing Detective Ben “Doc” Dougherty and his colleagues. Secrets and politics, both internal and external, complicate matters for the police, while Pittsburgh mob boss Mike Mannarino faces a different kind of pressure from the guys in New York. As King puts it, “It’s another week in the town of Penns River, with distractions that range from petty vandalism to a bridge jumper keeping the cops’ full attention away from the critical task at hand.”

The Big Thrill caught up with King during the flurry of the holidays to talk about TEN-SEVEN, the fourth novel set in the struggling Rust Belt town. King, who grew up in a series of small towns in western Pennsylvania, explained that Penns River is actually an amalgam of three small cities about 20 miles up the Allegheny River from Pittsburgh. He pulled in elements of “his” small towns to create Doc’s fictional hometown, a city whose fortunes are inescapably tied to Pittsburgh’s flagging steel industry.

It’s hard to say what’s most striking about Penns River: the people, the setting, or the town’s “edge city” dynamic. For King, it’s a combination of all three factors.

Different elements may come to the foreground in his various novels, or at different times within one of the books, but King sees the people and towns as completely interdependent. “Breaking them apart would be like trying to separate the blue from the yellow in a can of green paint,” he says.

While setting matters to varying degrees for each writer, there are some stories that cannot be told in a different setting. Try to imagine Raymond Chandler’s The Big Sleep in the Ozarks, or Daniel Woodrell’s Ozark Mountain-based Winter’s Bone in a Manhattan condo—they don’t work unless you fundamentally change the story. King finds that dynamic to be equal parts challenge and opportunity as he writes both the Penns River novels and his Shamus-nominated Nick Forte series—police procedurals and hardboiled mysteries, respectively.

King says writing in two subgenres provides an interesting option to place a story in whichever venue offers a better fit. He explains his process with an example: “The third Penns River book, Resurrection Mall, was originally a Nick Forte story. I was close to 40,000 words into it and generally not happy with how things were working out when I realized the premise of the story—a religiously themed mall in the shell of an abandoned predecessor—was better suited to Penns River. What’s ironic about that switch is that the mall that gave me the original idea was Dixie Mall in suburban Chicago, which is where the Forte stories are set.”

King uses a number of devices to keep both of his series fresh. He makes an effort to tell each story in a different way; some books are written almost exclusively from the police point of view, while others spend more time with the criminals. He also says that some of his stories have more violent cores than others.

“Fictionalizing a real place also helps [keep the series from getting stale],” he adds. “I subscribe to the local paper. … This not only provides several good plot or subplot or atmospheric options for each book, it’s also a way to make changes to my fictional town I might not otherwise have thought of, which can help to drive situations in the book.” Anyone who’s read a small town’s police blotter can definitely appreciate the possibilities.

With Penns River’s status as a Pittsburgh edge city, one challenge King faces throughout the series is communicating one of the series’ recurring themes—what happens to the small towns around a major city when the primary industry goes away?—without preaching. He often cuts or rewrites scenes where, after a second or third reading, he feels he was a little heavy-handed.

“One way I try to work things in is by describing the town without comment,” he says. “For example, making a note of how many dollar stores there are and how close together.”

Dialogue also provides opportunities to explore those economic themes in subtle ways, as a conversation about virtually anything can lead to an observation from one of the characters. Discussion of events of the day also gives King a chance to show how his characters think about the things that affect them. He offers an example: “There’s a scene in next year’s book at the local American Legion where characters argue the fine distinctions between a strike and a lock-out. A throwaway comment in the work-in-progress mentions how someone had their hours cut so the employer didn’t have to provide benefits.” The trick, King notes, is to keep these references between the lines as much as possible.

When it comes to literary influences, King has some strongly held positions. “My original North Star when I decided to write a procedural series was Ed McBain, but the deeper I go into Penns River, the more I see Joseph Wambaugh pulling me in his direction,” he says. “McBain showed me the potential for an ensemble cast, and Wambaugh taught me the story doesn’t need to be too linear if the sidings are entertaining enough.”

As with TEN-SEVEN, King says his work-in-progress has the main crime playing out over the course of the book, while the police are busy “dealing with the day-to-day stuff that can distract them from the big case at hand, especially if there are no leads in the major case.” While he’s working, he says, he’s always aware of Wambaugh’s famous maxim that a good procedural is less about how cops work on cases than it is about how cases work on cops.

As for what the future might hold for the series, King is currently at work on the first draft of the sixth installment, with outlines for two more “pretty well formed in [his] head.” He’s also considering a venture into some very different genre territory.

“I’ve been threatening to write a western for a few years now,” King says. “I have the outline mostly written, so I hope to at least get started on that later this year.” 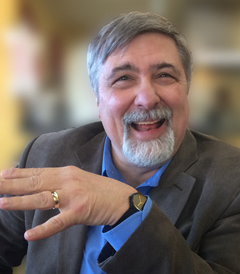 Dana King’s Penns River series of police procedurals includes Worst Enemies, Grind Joint, and Resurrection Mall (all published by Down & Out Books). His Nick Forte series has two Shamus Award nominations, for A Small Sacrifice and The Man in the Window. The third book in the series, Bad Samaritan, was published by Down & Out Books in January 2018. His short fiction has appeared in Spinetingler, New Mystery Reader, A Twist of Noir, Mysterical-E, and Powder Burn Flash as well as the anthology Blood, Guts, and Whiskey, edited by Todd Robinson.

To learn more about Dana, please visit his website.

January 28 to February 3: "What is your favorite sub-genre of thrillers?"