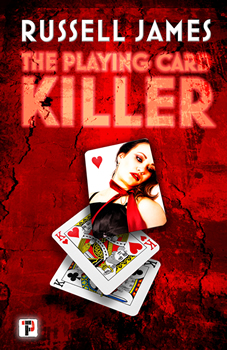 Author Russell James brings us a new tale of terror in his latest book, THE PLAYING CARD KILLER.

Brian Sheridan is plagued by dreams of murder—women strangled with a red velvet rope then left with a playing card tucked in the corpse. But then one of his nightmare’s victims shows up on the news, dead, Brian fears he himself may be the unwitting killer. Detective Eric Weissbard thinks the same thing, and starts to build a case to get Brian behind bars for being the Playing Card Killer. But there’s more to these slayings than either imagines. Brian finds that his family tree has yielded some truly poisoned fruit: an unknown brother with a penchant for murder. Tyler is willing to frame Brian for the crimes, unless Brian wants to join Team Playing Card Killer.

The Big Thrill recently caught up with James to learn more about this exciting new story.

What first drew you to writing crime and thriller fiction?

Crime and thriller fiction has always kept me perched on the edge of my seat while reading. Done right, it leaves the reader no breathing room, no place to conveniently put the book down. That was the kind of experience I wanted to give the readers when I sat down to write THE PLAYING CARD KILLER.

Tell us about your main character, Brian Sheridan. What has his journey been like up until now?

Brian has had a difficult life. Surrendered for adoption by an indifferent mother, her drug and alcohol use during pregnancy left Brian with a lot of psychological issues, including crippling anxiety. He’s adopted right after birth by an affluent family, which should have been wonderful. But when they discover Brian’s psychological problems, and how difficult raising him will be, they are not thrilled. Then against all doctors’ diagnoses, Brian’s mother gets pregnant. In her mind that means she never had to adopt this problem child at all. So Brian’s life had been one of rejection, alienation, and prescribed medication to deal with it all. It’s his decision at age 20 to go off that medication cold turkey that sets the whole story in motion. He wants to start a new life, but gets one he could never have imagined.

I met a set of twin boys who seemed to be in touch with each other almost telepathically, knowing how the other one felt when they were in different locations. I looked into the phenomenon and saw that it was more common than I’d imagined. I thought how cool that would be, unless your twin was evil. And a story was born.

Brian and his brother represent how events can impact our personalities and the trajectories our lives take. Everyone can look back on moments that, in retrospect, were turning points in their life stories. But Brian also demonstrates that we don’t have to completely cede control to those events. He does, and we can, always choose the path we will take, even if it is difficult to stay on that path.

The first necessary element for a suspense story is a great character. If the reader isn’t invested in a relatable, realistic protagonist, the reader won’t be at all worried what will happen to that poor soul. I had a wonderful (I thought) manuscript of a suspenseful thriller finished. When I re-read it later, it just didn’t capture my imagination. The culprit ended up being a protagonist that didn’t jump off the page and drag me into the story. We’ll see if that ends up being a terminal illness for that story.

A good thriller is my favorite read. I love to hit that high point at the end of a chapter and rationalize that I can stay up a little later and read just a few more pages.

Putting myself inside the head of a serial killer is an unnerving experience. The bad guy has to be the hero of his own story. Making credible rationalizations for him to have for his actions sometimes made me feel like I was defending him. That was always a skin-crawling moment. 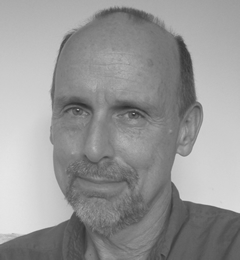 Russell James grew up on Long Island, New York and spent too much time watching late night horror. He graduated from Cornell University and the University of Central Florida. After flying helicopters with the U.S. Army, he now spins twisted tales, including paranormal thrillers Dark Inspiration, Sacrifice, Black Magic, Dark Vengeance, Dreamwalker, and Q Island. His Grant Coleman adventure series covers Cavern of the Damned, Monsters in the Clouds, and Curse of the Viper King. His wife reads his work, rolls her eyes, and says, “There is something seriously wrong with you.”