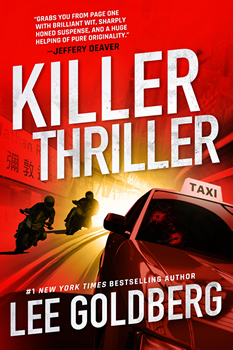 Ian Ludlow is a regular fictional guy—he writes the popular Clint Striker thriller novels. His plots, however, have the unfortunate habit of coming true.

In KILLER THRILLER, the latest Ian Ludlow book by bestselling author Lee Goldberg, Ludlow is thrown in the middle of one of his novels and being chased by assassins—turns out that Ludlow is the real hero, not Striker. And forced to rewrite his own ending before it’s too late, Ludlow must walk the line between fantasy and reality.

KILLER THRILLER is the fast-paced follow-up to Goldberg’s first in the series, True Fiction. Although hard at work writing the third novel of the Ian Ludlow series, Goldberg took some time to answer a few questions for The Big Thrill.

Exactly the same thing. Facing that blank screen, wondering not only where the next story will come from, but if any publisher or studio will buy it. Ian Ludlow, in many ways, is me, which is how I try to ground his big adventures in reality. Unlike Ian, though, I have a family and I love working in TV. I’m not as cynical or sex-starved as he is.

Ian Ludlow is based off your first pen name.  If you were writing your own story, would it read like these novels?

Not at all. My life isn’t as exciting as his…

I lead a very normal, domestic home life. I’m your average husband and father…I walk the dog (and pick up poop), I go shopping at Costco, I grill a lot of meat, I buy clothes at the outlet mall, I embarrass my daughter, I exasperate my wife—nothing very glamorous or exciting. And I love every minute of it. The only difference between me and a million other dads out there is that I get paid to make stuff up.

What Ian and I share in common is our physical build, the way we dress, and what we do for a living. And, like him, I’m creeped out by how much of the stuff that I make up to entertain people is coming true.

It always starts with character. I ask myself what situations will create the most conflict for the character, bringing out his best or worst qualities/reactions/instincts—and that will provoke the drama or humor that I’m looking for. Character and conflict are what will drive a story forward and make it entertaining and compelling. A story without character is just plot, and that’s not going to get a reader to invest themselves emotionally in what’s happening.

Ian uses souvenirs as visual reminders of the places he has researched for his novels. Is this a technique you use?  Is so, what are some examples?

Yes, it is. I recently went to Portugal to research a book. I brought back a tiny bag of salt from Averio, a can of sardines from Lisbon, a Rosary from Fatima, a tile from Obidos, a small bottle of Port from Porto. They are on the shelf near my desk right now. But I also have on my shelves tons of souvenirs from other places I’ve written about—a boomerang from Australia, a dreamcatcher from New Mexico, a mask from Venice, a limoncello bottle from Sorrento, a voodoo doll from New Orleans, a chip from the Berlin Wall…I could go on and on.

A man from the CIA knocks on your door. How do you respond?

I’d invite him in, of course. I know writers who’ve been in this situation. And usually what the CIA wants are ideas…they are bureaucrats, they don’t have the imagination to come up with bold terrorism scenarios. So they seek out the experts. That was one of the inspirations for True Fiction and, by extension, the sequel.

Absolutely not…and, in many ways, that was the inspiration for True Fiction and the sequel. I know so many guys who write kick-ass, high-action thrillers who, if put in the same situations as their heroes, would run away crying. Or am I wrong? Would they be more resourceful than I might think? After all, while they may not have the physical attributes, experience, and training as their protagonists, they do think the same way and can see they world in the same way that they do. If a writer’s protagonist is a deductive genius with incredible observational skills…or a brilliant thief able to plot elaborate heists…or a clever con artist able to pull of outrageous scams…isn’t it possible, if not likely, that the writer might have those same talents and not realize it?

In your work, you continually explore the relationship between fiction and reality.  What is your fascination with the contrast and blurring lines with narrative and actuality?

I wish I knew—because it’s a theme I keep coming back to. In some of my earlier fiction, I explored how people’s expectations about life, about themselves, about relationships, about nearly everything in their lives, are impacted by books, film, and television. Or, to put it another way, how we constantly measure ourselves against a fiction (like the airbrushed/photoshopped models on the covers of magazines) and are surprised when we don’t measure up. But now my exploration of that theme has changed. Now it’s about how our personal fiction, or fantasies, can shape the world around us, perhaps because it’s become a real issue in all of our lives. Just look at the impact of “fake news” on how we interpret facts…or what we consider facts to be these days. Look how foreign actors—like Russia—keep trying to change our perception of reality with their fiction by manipulating social media. Or how our own President tries to replace objective facts with his own “truth.” In Ian’s case, it’s how his fiction is coming true—and how hard it is becoming for him to find that line between fiction and reality.

I can sympathize. What’s been really creepy lately is stuff that I am making up in my books keeps coming true. Much of the stuff I made up in KILLER THRILLER is now fact. For example, every day there is another revelation in the news about how China has hardwired “backdoors” into the technology we manufacture in their country so they can spy on us, whether it’s security cameras and cell phones or children’s toys. I recently had the surreal experience of editing the galleys of my next novel (Lost Hills, September 2019) while some of the entirely fictional events I described on those pages were coming true on the evening news exactly how I imagined them. It’s been a constant problem while I’ve been writing Fake Truth, the third Ian Ludlow novel. My fiction keeps becoming reality—only now it’s happening while I’m writing and I’m forced to frequently decide whether to replot my story or just keep going. My editor and my wife find it amusing—I mostly find it frustrating and scary. I’m afraid my book will come out and it will already be old news. People won’t believe that when I wrote the book none of it had happened yet.

You have written novels and for television.  Mediums that are very different.  What are the positive and negatives of each?

Scripts are dialogue and action driven.  Or, to put it another way, stories are told through action and dialogue. To me, that’s a lot faster, though not necessarily easier, to write than a book.

A book is entirely my own and unaffected by production concerns or actors. I’m the actors, the director, the production designer—it’s entirely mine. It’s not a blueprint. It is the finished product and it won’t change much once I am done with it.

Creatively speaking, there’s a big difference between writing prose and writing a script. In a book, you’re seducing the reader. You’re bringing them into your imagination and holding them there for as long as they’re reading the book. You construct everything. You construct the sets, the wardrobe, the world. You’re God. You can even read a character’s thoughts.

The only thing that TV and books have in common is that both are mediums for sharing stories—in books, you tell stories, in TV you show them. That simple distinction is a difficult one for many writers to overcome when moving into one field from the other.

Have you ever had to sacrifice a goat for your work?

To understand the reference, readers should pick up KILLER THRILLER.

Lee Goldberg is a two-time Edgar Award and two-time Shamus Award nominee and the #1 New York Times bestselling author of more than thirty novels, including Washington Post bestseller True Fiction, King City, The Walk, fifteen Monk mysteries, and the internationally bestselling Fox & O’Hare books (The Heist, The Chase, The Job, The Scam, and The Pursuit) cowritten with Janet Evanovich. He has also written and/or produced scores of TV shows, including Diagnosis Murder, SeaQuest, Monk, and The Glades. As an international television consultant, he has advised networks and studios in Canada, France, Germany, Spain, China, Sweden, and the Netherlands on the creation, writing, and production of episodic television series.

To learn more about Lee and his work, please visit his website.