What if Hitler had Produced Offspring? 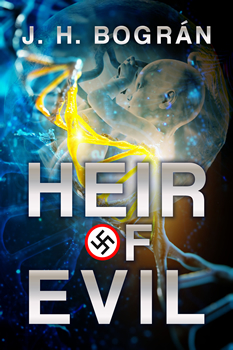 J. H. Bográn’s new thriller, HEIR OF EVIL, grows out of a firecracker of a premise: What if Adolph Hitler had produced offspring? What would be the fate of the next generation, here in the 21st century?

This is the story of Oscar Brown, a pretty ordinary fellow until he discovers, on his 30th birthday, that he’s the Fuhrer’s grandson. The book is set back at the turn of the century, so technology is less advanced. Nonetheless, Oscar is a workaholic, raised by a single mother who worked double shifts to put him through college. As the author says, he feels he has something of a debt to pay.

“He´s also a natural salesperson,” Bográn says. “I bet that, if the book had been set a few years later instead of 2000, he’d be one of the early users of Blackberry devices and his conversion into workaholism would be complete.”

The revelation of his heritage turns Brown’s life upside down. Neo-Nazis are looking up to him as a symbol. Of course, the Mossad wants him dead. And the CIA turns a deaf ear to his plight. Brown finds himself running for his life, trying to discover the true origin of his inheritance and questionable birthright.

While HEIR OF EVIL can be enjoyed as a standalone thriller, it does have ties to some of Bográn’s earlier work. The book is not a direct sequel to 2014’s Treasure Hunt, but it is part of the Falcon Chronicles series because its main character plays a pivotal role in this story.

“The story features The Falcon, a thief-for-hire that people contact through ads posted to the early versions of the internet,” Bográn says. “I had fun coming back to the character in general, and writing the ad for connecting Oscar and The Falcon.”

The Falcon is the hero from Treasure Hunt, and he complicates the plot as he waltzes in, night-vision goggles in hand. Fans of Bográn’s earlier work will be thrilled to see him in action again.

You might wonder how a writer would come up with such a wild idea for a novel. As it turns out, that’s quite a story in itself. It seems that in 2001, Bográn was feeding one of his baby boys and spilled milk over his lip in the shape of a Hitler-style mustache.

“I then joked to my wife, ‘Hey, he looks like the Fuhrer’s son,’” Bográn says. “I was on a roll, so I pushed the joke further, ‘or maybe not the son, too much of an age gap. His grandson, maybe?’”

And with that spur-of-the-moment comment, he had an epiphany: What if Hitler HAD had kids?

The idea stuck, but it wasn’t until 2004 that he felt he had done enough research to start writing.

Bográn is a native of Honduras, so the novel was first published in Spanish in Central America in 2007 under the title Herdero del Mal. HEIR OF EVIL is the first English edition.

Much of Bográn’s past work does take place in Central America, but Oscar Brown’s journey begins in New York City as one of the Wall Street heroes of the day. He then moves to Frankfurt, Germany, which Bográn rather enjoyed.

“The research led me to discover very interesting bits about the city and its rich history,” Bográn says. “For some reason, when we think of a country in general, we barely think of regions other than the capital. You say France, and most folks will hear Paris. Of course, there are notable exceptions like Barcelona, Florence, or Marseille.”

This is truly a global thriller, with scenes set in Washington, Tel Aviv, and even Paris, not to mention a crucial incursion into Moscow.

The book includes a master villain, a megalomaniac bent on world domination reminiscent of the early James Bond bad guys. A new version of the Third Reich arises, and of course its leader wants Oscar Brown to join the crusade. This is close enough to reality to be evidence that Hitler, World War II, and the Holocaust continue to be relevant.

This novel has the kind of old-school thriller sensibility about it that will attract fans of Frederick Forsyth and even Robert Ludlum. If you want to chase a truly thrilling “what if” story around the globe, pick up HEIR OF EVIL.

José H. Bográn is a bilingual author of novels, short stories and scripts for television and film. He’s the son of a journalist, but ironically prefers to write fiction rather than facts. His genre of choice is thrillers, but he likes to throw in a twist of romance into the mix. As a freelance writer, he has several articles published in a wide range of topics. He currently divides his time as resource development manager for Habitat for Humanity Honduras, teaching classes at a local university, and writing his next project. He lives in San Pedro Sula, Honduras with his wife, three sons and a “Lucky” dog.

To learn more about Jose and his work, please visit his website.