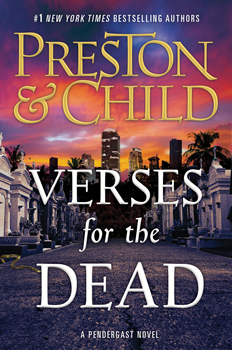 FBI Special Agent Pendergast is assigned to work with a new partner in VERSES FOR THE DEAD, the latest thriller in Douglas Preston and Lincoln Child’s hugely popular series. And, as fans of the famously rogue operative might expect, Pendergast finds that almost as challenging as the series of sensational murders he needs to solve.

Pendergast and his unwanted new partner—a young agent known only as Coldmoon—are called in to investigate a serial killer known as “Mister Brokenhearts.” The killer places the hearts of his victims on various tombstones in the Miami area, all apparently offerings to women who have committed suicide.

“We’re always looking for new ways in which to complicate Pendergast’s life or mortify him in some way or other that is (we hope) interesting to the reader,” Child says. “Giving a lone wolf like Pendergast a partner he has to work with seemed like a nice, and novel, idea.”

“Needless to say, Coldmoon and Pendergast are very different,” Preston adds. “I don’t want to spoil the process of the reader discovering who Coldmoon is by telling you all about him. He’s a junior agent, a by-the-book kind of person, who is somewhat taken aback—but also intrigued by—Pendergast’s unorthodox methods.”

Preston and Child are well known for the imaginative ways they carry out murder in the Pendergast books. (Their last one—City of Endless Night—was about a serial killer who cuts off the heads of his victims.) But how did they come up with the idea of Mister Brokenhearts—a killer who leaves the hearts of his victims on women’s graves?

Even the authors themselves aren’t quite sure about that. “I think this time around the idea mostly came from Doug,” Child says. “And it may bear some indirect resemblances to a real-life crime, which he can tell you about.”

“No, no,” Preston says, “this truly sick idea was all Linc’s, as I recollect. It’s based on the fact that some serial killers do leave ‘mementos’ on the graves of their victims, sometimes in the form of body parts or jewelry taken from victims.”

Even more than the plot though, VERSES FOR THE DEAD—like the previous books in the series—is really about FBI Special Agent A.X.L. Pendergast, the beloved investigator who is delightfully different from any other detective protagonist in the thriller world.

Preston (who has often said that the idea for the character started with an off-hand comment about making him an “albino from New Orleans”) describes Pendergast this way: “He’s not an albino, of course, just very pale. I’m not sure where he came from. We’ve never created another character this way.

“He’s an FBI agent out of his time and out of his place, a gentleman of the South with antebellum manners and refinements and pretensions, quite unlike a typical FBI agent. He is, in fact, very much a rogue agent within the Bureau. He is severe and uncompromising in terms of his values, but with an agreeable softness of manner with those he likes—and an icy terror of judgement, a veritable destroying angel, to those he doesn’t. And yet he has an unhealthy fascination with, and insight into, the most twisted criminal minds. If he hadn’t become an FBI agent, he might have made a masterful criminal.”

But what would it be like to meet Pendergast in real life?

“It would be formal, short, and strained,” Child says.

“We have met Pendergast and it has not gone well,” Preston counters. “He doesn’t appreciate our books, thinks they are poorly written, sensationalized, and focus on the wrong issues. And he especially doesn’t like Linc’s taste in Hawaiian shirts.”

In addition to the new partner, a welcome surprise for fans in this book is the return of Smithback, the popular journalist the authors killed off in an earlier Pendergast novel. Well, of course, Smithback himself is not back. Instead, we meet Smithback’s brother who plays a key role in working with Pendergast on the story.

“It was a little stressful to do, actually,” Child says, about creating the new Smithback character. “We had to make sure that he was his own person, while still maintaining some of his brother’s qualities, and at the same time make sure our readers were happy. The one thing we didn’t want was to bring in a brother of Smithback and have readers say, ‘oh, this is anticlimactic.’”

“Linc and I both liked Smithback very much and we were sorry that he was gone,” Preston says. “We missed him. We wished we hadn’t played God and killed him off. So we played God in a way to bring him back… sort of.”

This is the 19th Pendergast thriller, and many of the books in the series include the intriguing backstory of people and events in the agent’s life. But Preston and Child have tried in this book—as well as their previous one—to write more of a standalone thriller that can also introduce Pendergast to new readers.

“Readers have greatly enjoyed the books in which we pull back the curtain on Pendergast’s private life or the history of his family,” Child says. “For whatever reason, those stories often (but not always) end up being several books long—e.g. the ‘Diogenes trilogy’ or the ‘Helen trilogy.’”

“But it’s also important for us to write standalone books that show Pendergast facing new challenges. It helps new readers, too—the Pendergast universe has become rather crowded and we don’t want our books to ever be confusing. Even with the ‘personal’ stories, we do our best to make sure that anyone can come to them and be entertained without knowing the backstory.”

In addition to the Pendergast series, Preston and Child have written many other books—both together and on their own. These include fiction series and standalone thrillers, as well as notable non-fiction from Preston on everything from archeology to real crime, such as the Amanda Knox murder trial.

So, what’s next? And how long do they think they’ll keep writing about Pendergast?