Mother and Daughter Battle the Odds

“Here are the facts. I am alone. I am on a mountain. The plane I was on has crashed. I have very little food and water. It will be dark in a few hours and my only shelter is a twisted hulk of metal that could, at any minute, explode.”

“I don’t know how much time I have before they come looking for me.” 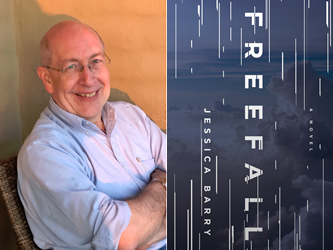 Allison (“Ally”) Carpenter is the only survivor of a private plane crash in the Colorado Rockies, but it is the very dark secret she carries—more than the crash itself and the ordeal in front of her—that scares her the most. Because if they find out she’s alive, they’ll kill her.

Across the country, in a small town in Maine, her mother, Maggie, harbors her own dark secret. And it is the guilt from it that sparks her determination to find out what happened when she’s told of her daughter’s presumed death.

Two women, thousands of miles apart, battling against impossible odds and implacable enemies to find their way back to one another before it’s too late. As Jessica Barry’s FREEFALL crosscuts between them, it becomes a story not only of survival, but of grief, resilience, betrayal, reinvention, and the fierce, tangled bond between mother and daughter.

People use the phrase “rollercoaster ride” indiscriminately to describe thrillers, but it truly applies to the multiple twists and turns of FREEFALL How did Barry accomplish it? 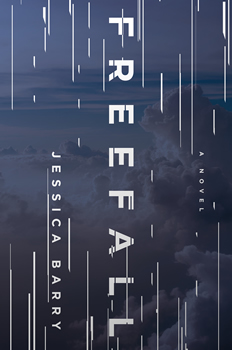 “If I have an idea for a book, I try to roll it around in my head for a while,” she says. “I’ve made the mistake so many times of sharing an idea too early and watching it dissolve because it hasn’t had long enough to germinate. So, idea first, and then voice/character, and then the plot.

“The idea first came to me about five years ago. There was a news story about a teenaged girl who was on a single-engine plane with her grandparents when it went down in the middle of the wilderness. Her grandparents sadly died in the crash, but she survived—in fact, she only had a few bruises on her. She had no way to get in contact with the outside world, so she ended up walking through the woods for several days until she hit a main road and was rescued. I thought it was incredible that someone could survive something as catastrophic as a plane crash and find the willpower to find safety like that.”

“Allison feels quite close to my younger self. Not in the things she gets mixed up in, but in the way that she feels quite formless at the beginning of the novel,” Barry says. “My twenties were spent shaping myself into various molds, hoping to find something that fit, and this feels true of Allison, too. I’m also incredibly stubborn, a trait that both Allison and Maggie share. I think I have elements of Maggie’s practicality, but in all honesty, I can only wish to be half the badass she is. Maggie is based much more on the women I knew when I was growing up—flinty, no-nonsense, deeply practical New England women who made tough choices and never asked for—or wanted— sympathy.”

“Oh, lord. The plot! The voices of the two main characters came to me quite quickly—particularly Maggie’s—but it was my first suspense novel and I hadn’t appreciated how tricky all of the plotting would be. There were a LOT of rewrites,” Barry says.

“Plotting is such a specific skill and I really had to work at it to get it (hopefully) right. With suspense, you have to get every reveal and twist right or the whole thing falls apart. If I could go back and talk to my newbie self, I would bang on about the importance of outlines and timelines. It’s tedious to do, but saves you a lot of time in the end, as it provides a framework and prompts for when you get stuck. That would be my advice to any writer just starting out. That, and the only way a book gets written is by sitting in front of your computer every day and forcing yourself to do the work.”

The concept of “reinvention” is one with which the author is herself familiar. Born and raised in a small town in Massachusetts, she moved to London in 2004, started out in academia, got involved in book publishing, saw a marriage end and another one begin—and Jessica Barry is not her real name.

“I’ve lived in London for fifteen years now—basically my entire adult life—so in a strange way, I don’t know anything else,” she says. “I do think the sensibility is different here—it’s true that people are a little more reserved, and tend to have a drier sense of humor. I’m always amazed when I’m in America by how open people are with each other. I remember going into a Sephora once when I was in California, and the saleswoman told me a little potted history of her life while helping me choose a perfume. I loved that. You definitely would not get that level of sharing in the U.K.”

Not that she’s above doing some sharing herself. Under her real name she’s written three other novels, none of them a thriller, but the first of which hits particularly close to home, because it was based upon her own very unusual experience.

“I used my love life as a sociological experiment by trying out the methods of a different dating guide every month, and recorded the reaction I had from my (unsuspecting) dates,” she says. “It was exactly the kind of insane thing a person does when she’s 27 and freshly divorced, and it was lots of fun, and at times extremely awkward.

“Following The Rules was the trickiest, as it’s all about playing hard to get, and I am by nature a fairly impatient person. I hated ending evenings early and not returning phone calls—it made me feel incredibly rude. The best was a 1920s ‘flapper’s’ guide to dating, which basically instructed you to drink cocktails and flirt with everyone in sight. I had intended to do the project for a year, but things came to an abrupt halt when I met my now-husband and fell in love. It felt unfair to conduct my little experiment on him, particularly since the book I had lined up next was Why Men Love Bitches.”

Barry not only wrote a novel about the “little experiment,” she blogged about it while it was going on: “For about four months. I was lucky in that I didn’t get much blowback from it (probably because no one was reading it), though I did have a former colleague get in touch and ask if he could be a part of the experiment,” she says. “That date ended in so many sambuca shots. I still can’t think about it without my stomach turning. My now-husband [whom she called ‘Geordie’ in the blog] was amazing about it, though that’s probably because he came off so well.”

As you’ve probably surmised, that wasn’t the only good thing to come out of the experiment—her own writing career was born, and that’s been a bit of a rollercoaster ride itself.

“I can’t pretend that I haven’t been seriously privileged—it was a friend of a friend who first approached me about writing a book after she’d read my blog, and I was already working at the agency that now represents me,” she says. “In that way, I sort of fell into it. (Infuriating, I know.) That said, if Felicity Blunt hadn’t been down the hall from me and already a friend, I doubt I would have ended up a published author. I had zero confidence in my writing—I can’t imagine that I would have had the courage to submit my work to a stranger. The road was a lot bumpier after I got my first publishing deal: I had three editors across three books, and while the first book performed okay, the second two were unmitigated disasters. It taught me not to have expectations, and to try to take pride in the work itself rather than the end result (easier said than done).”

Based on other people’s high expectations, though, the end result for FREEFALL is likely to be anything but a disaster. It’s acquired stellar endorsements, the publisher is going all out for it, and movie rights were snapped up for seven figures.

Barry’s next book? “Another thriller, this one set in a car journey across the desert in a single night.”

Does that sound as promising to you as it does to me? Can’t wait.