A Cry for Help from the Future 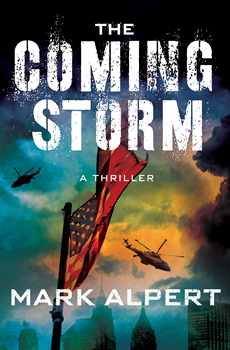 History is littered with amazing novels that, in hindsight, flashed brightly as a warning sign of things to come. Tom Clancy predicted that an airliner would be weaponized, H. G. Wells predicted that an atom bomb would be dropped, and Arthur C. Clarke predicted the rise of digital media—all fine examples of authors who, because of their insight or intelligence or imagination, were able to foresee the future.

We may look back at THE COMING STORM by Mark Alpert as another such book—except this one paints a picture of the future that is far darker than most.

Without giving spoilers, it’s chilling that several of the things Alpert writes about in his latest release have been in the headlines lately. Alpert says, “Between the writing of THE COMING STORM and its publication, several of the events I predicted in the novel have already taken place… I was shocked; I didn’t think it would happen so soon.”

THE COMING STORM illustrates a terrifying near future that has a direct line of sight to the politics and crises of today. The book is set in New York City against a backdrop of rising sea levels and a brutal regime in Washington that is detaining thousands in flooded detention zones, led by a president intent on silencing his critics.

In the middle of this apocalyptic scenario, geneticist Dr. Jenna Khan learns about diabolical medical experiments that have warped the government’s soldiers, making them more proficient and ruthless. Teaming up with a group of renegade New York City cops, she fights to stop the corrupt government from expanding their DNA manipulation to all Americans.

The combination of a dystopian setting, politics, and hard science made this book unlike any I’d read in a long time. And I think that’s exactly how Alpert intended it.

“Science shouldn’t be in conflict with politics,” Alpert says. “But when politicians deny and undermine scientific findings, they endanger our children’s future. That’s why I put so much politics into a science thriller.”

Alpert is eminently qualified to talk about the science, given he’s a contributing editor at Scientific American and a former astrophysics student at Princeton University with scholarly work that has been cited more than 100 times. He’s carried his knowledge into his fiction, having already penned several bestselling thrillers for Simon & Schuster and St. Martin’s Press that are grounded in science.

Perhaps the most remarkable thing about THE COMING STORM is that it doesn’t shy away from criticism of President Trump. In fact, it’s almost the worst-case scenario.

Set in 2023, the story finds the Trump Administration nearing the end of its second term. Global warming is out of control, the White House is harassing immigrants, and the government has torn up the constitution and declared martial law.

“I want to warn readers that some of these national calamities are now in the making,” Alpert says. “To do that, I decided to write a story showing the worst possible scenario: an out-of-control White House using powerful new technologies to create an American Gestapo. I wanted to write a mind-blowing thriller inspired by real political mayhem that gets crazier every day.”

Alpert has firmly established THE COMING STORM as a cautionary tale and he willingly admits to being influenced by other novelists who have written about authoritarianism and technology run amok: Philip K. Dick, Harlan Ellison, Michael Crichton, and so on. But he cites his favorite novel about sinister politics as All the King’s Men by Robert Penn Warren.

“It’s the best literary thriller ever written,” Alpert says. “Its central character, Willie Stark, is based on Huey Long, the Depression-era Louisiana governor and senator. I’ve always wanted to do what Warren did in that novel—draw a fictional portrait of a polarizing, morally compromised politician—and I saw my opportunity when Trump was elected president.”

Perhaps someday, the name Mark Alpert may be mentioned in the same breath as these other authors, prophets who wrote books that were perfect for just beyond their time. Reading THE COMING STORM is a riveting experience, but also a deeply uncomfortable one.

And it’s already garnering high praise from some heavy hitters in the genre.

James Rollins says, “THE COMING STORM starts with a terrifyingly plausible look at what lies just beyond our political horizon and ends on a note even more disturbing and frightening. This novel isn’t just ripped from the headlines, it’s an alarm bell ringing from the near-future, a prescient warning of where we’re headed next.”

And Jeff Ayers wrote in a Booklist review: “Alpert’s vision of the end of the world is terrifying on multiple levels and comes across as all too believable.”

Only time will tell us if Alpert’s view on the future will ultimately be right—whether a climate change catastrophe will lead to scientific abuses and political chaos—but there’s no doubt the book should make us sit up and listen.

Right or wrong, if the cry for help from the future is as desperate as Alpert suggests, can we afford to not heed it? 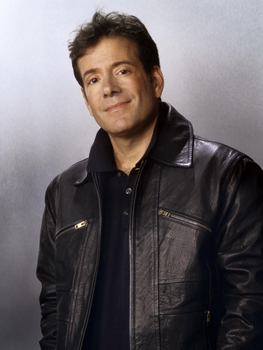 Mark Alpert is an internationally bestselling novelist and a contributing editor at Scientific American. His first thriller, Final Theory (Simon & Schuster, 2008), was published in twenty-four languages, optioned for film, and condensed for Reader’s Digest. His other novels include The Omega Theory (S&S, 2011), Extinction (St. Martin’s Press, 2013),  The Furies (SMP, 2014), and The Orion Plan (SMP, 2016). He has also written a trilogy of Young Adult science-fiction novels—The Six, The Siege, and The Silence, all published by Sourcebooks. His next thriller, THE COMING STORM, will be published by St. Martin’s Press in January 2019.

To learn more about Mark and his work, please visit his website.