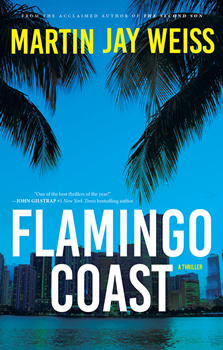 Martin Jay Weiss grew up an avid reader and lover of mysteries and thrillers. But his love of stories and storytelling seems to have come from a slightly different place than most.

“I was obsessed with puzzles as a child,” says Weiss, who first followed his love of storytelling into filmmaking. “Movies are just really elaborate puzzles that help us make sense of the world.”

In time, Weiss found the same to be true for novels. His second thriller, FLAMINGO COAST, debuts on January 15. Below are excerpts (edited for length) from an interview with Weiss, where we talked about storytelling through different mediums, the intrigue of financial crimes, and the importance of controlling your story.

You have extensive film experience—commercials, TV, movies—what motivated you to write thrillers?

Growing up, I fell in love with cinema, and I found kindred spirits when I went to film school. My first film was a sequel to John Carpenter’s Vampires, and I loved the experience, but afterwards, I was only getting offered more horror films, which wasn’t really my thing. So I started writing screenplays for the kinds of movies I wanted to see. In 2013, one of my scripts had been in a very long development cycle at a studio, and after dozens of seemingly unnecessary rewrites, I went back to my original draft and novelized it. That summer I went to ThrillerFest, met some new kindred spirits, and saw the possibilities of building a brand writing the stories I love, the way I want them to be told.

How do you think your work in film helped inform your thriller writing? Where do you think it might have gotten in the way?

I think the advantage I had coming from visual storytelling was that I was trained to be economical with words and disciplined with plot. Screenwriters don’t have the luxury to write scenes that don’t advance the story, and they are taught to keep their detailing to a minimum. And I had to get used to writing from a specific point of view. In screenwriting, you can jump all over the place. With novels, your point of view is a crucial part of how the story is told.

Do you consider FLAMINGO COAST to be a financial thriller?

FLAMINGO COAST is definitely a financial thriller. It dramatizes how financial crimes manifest, how government watchdogs combat them, and what can happen when law enforcement abuses its power in the name of justice. The tagline on the book cover comes from something the heroine’s father told her when she was young: “When it comes to money, people will do unthinkable things…”

When thrillers are written that don’t include knives, guns, or bombs, I always like to ask about research. What was it like to research the financial and tax intricacies that it took to write FLAMINGO COAST?

Well, maybe FLAMINGO COAST isn’t a traditional financial thriller because it does have knives, guns, and bombs. But those were easy to get right. The research I did about financial crimes was much more difficult. It’s hard to get people to talk for fear of exposing the innocent, the guilty, or themselves. But some did talk to me. Most of the details I describe in the book about tax evasion and how people hide their money offshore came from confidential interviews with people who know how it’s done. And it’s done a lot, to the tune of seven trillion dollars, according to an IMF estimate. I also did a lot of research on government agencies that combat financial crimes. That, too, was fascinating. Some of their tactics are shocking. I based one of the subplots on a real IRS and CIA investigation to show a parallel to current offshore banking issues.

Tell me a bit about the book’s main character, Special Agent Jennifer Morton. What do you like about her? What keeps her human?

Jennifer Morton is clever as a fox and unabashedly aggressive when she goes after her suspects. She thinks of herself as the James Bond of financial crimes, and she has no issue breaking search and seizure protocol to prove her targets are guilty. The end justifies the means. She can be standoffish and sanctimonious too, which has crippled her personal life, but she has good reason to be skittish, which is revealed later in the story. She shows the depth of her courage when she confronts her past, learns the truth about her greatest betrayal, and has to choose between revenge and redemption.

Considering the world we live in today, especially where the IRS is concerned, did you find it challenging to make an IRS special investigator likable or compelling?

In the first draft, Jennifer Morton was Geoffrey Morton, a male protagonist. Making her female was an idea that came from some producers who are interested in making FLAMINGO COAST into a movie. I resisted the change at first, but when I tried it, the story became much more interesting. Maybe it was because such aggressive traits on a female are more unusual. And to elaborate on your last question, that’s when she really started coming to life for me. I began writing the story with curiosity about why people with accounting and finance backgrounds choose to work for the IRS when they certainly would have more lucrative options.

What’s one piece of advice that has served you well since you started writing thrillers?

I really believe in the 10,000-hour rule, the amount of time it takes to learn any craft. Learning to write well takes years. My advice would be to read a lot and write every day. It’s all about discipline and persistence. Read, write, repeat. 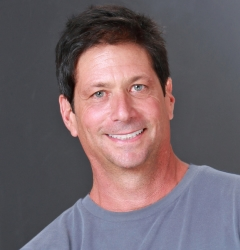 Martin Jay Weiss is the author of the acclaimed novel The Second Son. He has written, directed, and produced a vast anthology of award-winning commercials and films and has worked throughout North and South America, Eastern and Western Europe, and Southeast Asia. Born and raised in Chicago, he now lives in Southern California with his wife and two children.