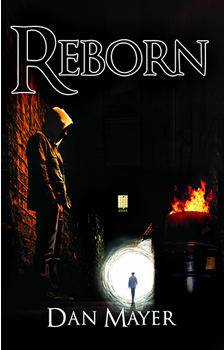 What would you be willing to do for a chance to live your life over again?

That’s the question facing Walter, the down-and-out protagonist of Dan Mayer’s sophomore novel, REBORN. Walt’s life has gone definitively off the rails: he’s reeling from the deaths of his parents and grandmother, and he’s estranged from the love of his life. When the mysterious Joshua offers him the opportunity to go back and fix his mistakes, Walt is willing to risk everything for a second chance—even if it means reliving the tragic death of his parents. But as the saying goes, if something seems too good to be true, it usually is.

Mayer is an Ontario-based author whose debut title, The Suffering, was released in November 2017. He’s currently working on his third novel, Dave’s War, a psychological thriller with supernatural elements. Between promoting his newest release and getting his next novel ready for publication, Mayer took time to answer some questions for The Big Thrill.

REBORN is your second published novel. How did this experience differ from your first book?

I knew what to expect and was better prepared, although not totally. Some of the time spent editing The Suffering was eliminated during the editing process of REBORN. I edited it more as I went, so it was more polished when I finished.

They say the second book is sometimes harder to finish than the first. Was this your experience?

I wouldn’t say the second book was harder to finish than the first. I didn’t release them in the order in which they were written; actually, the second book that I wrote was The Suffering, which was my first one picked up by my publisher and probably the easiest one to write so far.

In your other life, you’re a millwright. What type of mill do you operate?

In my day job, I’m an industrial mechanic. I troubleshoot and repair equipment—everything from conveyors, piping, welding, and machining to robots and everything in between. I work for a company that produces slabs of granite and quartz destined to be made into countertops for homes. I work two 12-hour shifts on weekends, so I have Monday through Friday to write.

Your book shows that there can be big problems in small towns. Does this come from your life experiences?

I live in a quiet town of around 6,000 people. I have never experienced any major problems where I live. That being said, I believe the sort of problems Walt faces in my book could happen anywhere to anyone, and that’s why I never really pinpoint exactly where my stories take place. It’s not about [the setting] as much as it is about the characters’ experiences.

The river is a major presence in the novel. Does it have a special meaning for you?

Rivers are very important to me. I’m an avid outdoorsman, and they’ve always been a special place to me. I like the way they move and sound, washing away your troubles, always a source of renewal as the water flows and changes. To be beside a river is like seeing into the future as it moves downstream, and into the past, knowing that generations of people have watched it before me.

In REBORN, the main character gets a second chance. Is there a point in your life where you got one or wish that you had?

Is there something in my life that I wish I could do over? Don’t we all? This book is about second chances. What would we do differently if we were given the chance, and could we if we wanted to, or are we pre-destined to make the same mistakes? Would your life be better if you changed it? Not necessarily.

There are some very dark themes in the book. How do you balance them with the positive idea of a second chance?

I think it’s that age-old question, is the grass greener on the other side of the fence? Walt is given a chance to try again, and he wouldn’t take that chance if he could see another way. It’s really about [the idea that] maybe you need to do the best with the life you’re given and stop looking for an easy way out.

Would you relive a tragedy to try to change the outcome of the rest of your life?

Joshua, is that you asking? [Laughs.] We all have regrets, but I wouldn’t take the offer if given the same proposition as Walt.

Without revealing too much of the book, what does Joshua get from giving others their second chance?

I really can’t answer that without giving it away. Does he get anything in return, or is he destined to live by the same rules as we do? This can only be answered by reading the book.

Do you think people learn from their mistakes, or are they doomed to repeat them?

Well, that’s what REBORN is about. It’s up to each individual reader to ask that question of themselves and see if they can answer it. 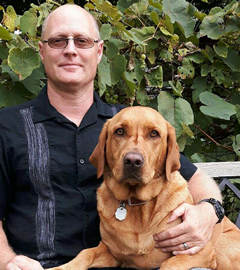 Dan Mayer lives in Delhi, Ontario, Canada. He likes to talk, write and talk about his writing. He is an outdoorsman who fishes, hunts, travels, scuba dives and rides a motorcycle. He has four grown children, two beagles and a red-fox lab.

Working as a millwright funds his many adventures that fuel his imagination.