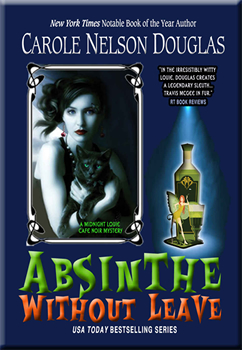 Formerly an award-winning, truth-telling, mainstream media, real newspaper journalist, Douglas is an Agatha and Nebula nominee, a USA Today bestseller, and a four-time Rita award finalist. She’s won RT Book Reviews awards for mystery and suspense, for career achievement, and as a pioneer of publishing for her multi- and cross-genre works.

The Big Thrill caught up with Douglas to discuss ABSINTHE WITHOUT LEAVE, the latest in her Midnight Louie series featuring an unsuspected co-detective to two amateur and pro human crime-solvers.

Termed an irresistible combination of Sam Spade and Nathan Detroit, Louie is back with a new partner-in-crime solving—savvy paranormal PI Delilah Street, fresh from the urban fantasy Dark Side of Vegas. Is the notorious late 19th-century drink of absinthe, now a Las Vegas rage, responsible for a magic-act murder? Or runaway human emotions: love, hate and jealousy? Or is some secret governmental undercover mission unraveling? Louie and his human partners will be forced to nose out the killer.

The Midnight Louie series is long running, with many fans, but for readers just joining, or transferring over with this series “mashup,” Douglas shares insight into how she develops main characters and what made her decide to feature a furry sleuth.

“I was an animal-loving newspaper reporter/feature writer who covered women’s and family social issues, fine and popular arts,” Douglas says. “An inches-long, costly Classified Ad seeking a new home for a black cat a local woman had flown home from Palo Alto, California, to St. Paul, Minnesota, to save from death in a pound caught my eye and curiosity. The cat lived on the upscale motel’s costly koi fish. Nights, he ankled up to lady guests at outdoor snack machines to cadge an inside bed in the chilly northern California nights. Guests called this elusive shadow/feline gigolo ‘Midnight Louie.’”

The perfect MO of a fabulous noir detective.

Douglas “met” the big black cat at the woman’s apartment and wrote a fun article on his survival skills. Louie eventually found a home on a farm. And Douglas founded a future novelist career—which wasn’t even on her radar.

In 1973, when Douglas published that article, writing about pets or animals was a disparaged no-no in journalism. She disregarded that maxim and went further—she wrote the piece from Midnight Louie’s point of view, and that became a catalyst for her series.

Douglas set the Midnight Louie novels in Las Vegas to evoke the Damon Runyon Prohibition-Depression settings of “Guys and Dolls” Broadway, with its gamblers, bookies, chorus girls, and down-and-outers. She says she wrote Louie as both an “homage to and critique of the iconic American male private investigator.”

ABSINTHE WITHOUT LEAVE combines two of Douglas’s series. She completed the 28-book alphabetical series (Cat in an Alphabet Soup, etc.) and decided the four main human characters could continue in Midnight Louie’s new Café Noir mystery series. To round it out, she imported the action heroine from her paranormal Urban Fantasy series.

“Think Dorothy coming from Oz back to a Kansas that passes for ‘normal,’” she says. “Delilah’s Las Vegas of mobster werewolves, demon drug lords, and Howard Hughes as an unkempt but still canny vampire, is too relevant and fun to abandon.”

Midnight Louie evolved from romantic suspense/unofficial house dick and moved in with his human partner, Temple Barr. The revolving set of crime-solving partners in the series—and Las Vegas offering so many interesting characters—helps Douglas avoid the “Cabot Cove” syndrome. Douglas absolutely sees those elements as the magic of Midnight Louie.

While she can concentrate on a condominium where several characters live, she has the entire Strip, its diverse entertainment venues, and “40 million annual visitors to explore and exploit.”

The series also explores human—and cat—family relations, good and bad, and each novel focuses on a social issue.

In ABSINTHE WITHOUT LEAVE, the issue is “missing persons.” The theme evolved naturally since Delilah Street, the crossover series character, is a missing person in her former world and a person who can’t account for being in the new Louie world.

More “missing” elements arise from Delilah’s rough inter-world ride, which ended in a head impact. Some of her memories are AWOL, as are series stalwart Max Kinsella’s after an attempt on his life.

“As Louie’s roommate Temple Barr says, ‘We’re all sometimes guilty of being absent without leave from people in our lives and families. Maybe even from our true selves.’”

While Douglas always writes a twisty mystery, humor is also a fixture in her work.  She says, “I can’t handle the dark without the light, although I’ve written at the edges of horror. The theatrical masks of Comedy and Tragedy have been portrayed as close and slightly overlapping since the Greeks. I started writing genre fiction in college because I hated the wimpy, rescue-needing women in popular historical Gothic novels.”

“Temple is deliberately petite and feminine to counter an early ‘90s trend toward women P.I.s in fiction as ‘men in drag,”’ she says. Temple’s strength lies in her strong soul. She’s as fierce as “a terrier rooting out vermin.”

Unadopted orphan Delilah, the other main character in ABSINTHE WITHOUT LEAVE, has always fought for herself and is more of a sexy action heroine.

Douglas sees the writing as always about the series underneath the plot and characters. She says, “I’m still a ‘crusading journalist.’”

In the Midnight Louie series, because the traditional mystery features murder among circles of ordinary people and professions, the crimes of the heart are more relatable than the aristocracy featured in Douglas’s Irene Alder series. Jealousy, grievance, and family or marital dysfunction provide motivation.

In the Midnight Louie series, one uber-villain is an Irishwoman, a former IRA agent who is a second-generation survivor of the often church-sponsored “institutions.” These were often little more than laundries, where unwed girls were confined as slave labor, often physically and sexually abused, and had their babies taken away to be adopted for money. Douglas finds her main character arcs always involve family reconciliation. These occur even in the catworld between Midnight Louie and his brash maybe-daughter, Midnight Louise, who accuses him of being “the dirty dog who left my ma with a six-pack of kits after a one-night stand.”

This series isn’t over yet, but Douglas currently has a number of projects underway.

She’s writing the next Midnight Louie novel, in which she explains, “Louie must face his inbred dislike of dogs.”

She plans to reissue his four founding miniseries books, the Midnight Louie Quartet. In addition to updating other reverted novels, she’d love to provide an ending to two early ‘90s series which were not finished due to publishing house politics. She also finds the rise in domestic thrillers exciting.

“I had an essay in Mystery Scene in the ‘90s decrying so many thrillers founded on brutalized and mutilated dead women to motivate the heroes to go on vengeful killing sprees. The last line was ‘When are we going to stop making profitable popcorn from man’s inhumanity to women?’”

The alternate path of the domestic thriller pioneered by many women writers over recent years calls to her. Perhaps Douglas will walk that path in a future story. 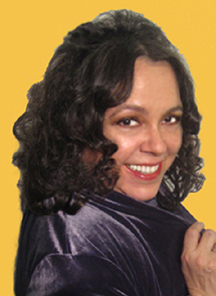 Beside shepherding Midnight Louie to his 33rd mystery, she was the first woman author to write a Sherlockian spin-off series and the first author to make a woman from the Canon a series protagonist. Good Night, Mr. Holmes featured the only woman to outwit Holmes, American Irene Adler, as a diva-detective and was a New York Times Notable Book of the year as well as garnering mystery and romantic mystery awards.

Formerly an award-winning, truth-telling, mainstream media, real newspaper journalist, Douglas is an Agatha and Nebula nominee, a USA Today bestseller, and a four-time Rita award finalist in four different categories for women’s fiction. She’s won RT Book Reviews awards for Mystery and Suspense, and for Career Achievement and as a Pioneer of Publishing for her multi- and cross-genre works. And has been in best mystery short fiction collections.

She’s sold sixty novels to New York publishers and is now writing her 65th, indie publishing and designing her own book covers. When she isn’t busy, she wonders how she did all that and rescues feral cats and reads in her spare time.