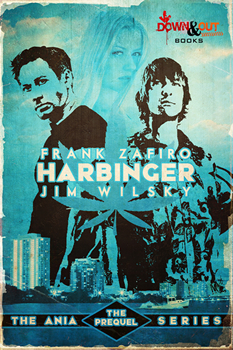 Set off the Gulf Coast of Florida, on the sleepy little island of Sanibel, HARBINGER is anything but sleepy. The storyline takes the reader to the origins of Frank Zafiro and Jim Wilsky’s character, Ania.

As they have throughout the series, the authors each voice one of the two main characters—lifelong friends Boyd Tomlin and Hicks Ledoux. Boyd is a straight shooter and the brains of the business. Hicks is the laid back and carefree one, who is always the life of the party. Boyd and Hicks own the Harbinger, a charter fishing boat passed down to them from their fathers.

When times get tough, Boyd and Hicks have to make some questionable decisions that put a strain on everything except their friendship. But when they meet sisters Ania and Karolyn, everything for them changes.

HARBINGER is the prequel to Zafiro and Wilsky’s Ania Series, which includes Blood on Blood, Queen of Diamonds, and Closing the Circle. The duo is also working together on a novella anthology, A Grifter’s Song, with several other authors.

Zafiro and Wilsky took time out of their busy schedules to answer some questions for The Big Thrill:

HARBINGER is a prequel to the existing series you co-write. Should new readers to the series start with this novel or read the books in the order they were written?

Zafiro: My recommendation would be to read them in the order written: Blood on Blood, Queen of Diamonds, Closing the Circle, and finally, HARBINGER. I think that the meta-arc plays better this way, and the things you discover in HARBINGER have a different impact when you have the foundation of the previous three. That said, they are all written to stand alone, and Jim may have a different take on the order. There’s certainly no harm in starting with the prequel.

Wilsky: Great question, and I smiled when I read it. Only because I remember a few phone calls where we discussed the rollout order and the marketing side of things. I smiled even bigger when I read Frank’s comment that “Jim might have a different take on the order.” And I’ll bet you a beer that Frank was grinning too when he answered this. In any series of books or, hell, movies for that matter, if something “new” is launched in a series that predates the already existing stories it can be a little tricky to market and position it. Once again, great question and an important one. I don’t think it makes a helluva lot of difference in terms of reading order but personally, I’d agree with Frank and suggest starting at the beginning of the series. Let it build.

Did you learn anything new about the character while writing this novel?

Zafiro: I think so, yes. But I can’t tell you, or it’ll ruin the book.

Wilsky: I’m pleading the fifth on that one.

How has the experience of writing this series differed from your previous works?

Zafiro: This is the only series that has a character like Ania, who is the thread that connects all the books, but whose perspective we don’t really get to see too often. So she remains a bit of a mystery throughout, although HARBINGER partially came to fruition because we wanted to explore something more of her origin.

Wilsky: Besides having the luxury of working with, and learning from, a talented writer like Frank, I would say the biggest difference is momentum—and flow. From chapter to chapter and book to book, there was never a feeling of being stalled. The very nature of alternating chapters allows a writer to read the co-author’s work, feed off of that new energy, and then just go.

How has this partnership changed your own styles and processes?

Zafiro: It’s made me a better editor. I can approach my own work more objectively. It’s also made me more flexible, because you have to be willing to compromise for a partnership to work.

Wilsky: Process wise, it has clearly and without any doubt changed the way I approach the construction of a story, the real mechanics of it. In terms of style, not so much. I believe a person’s “style” is something inherent. It is you. I suppose writers could adopt another style of writing and maybe many do, but I don’t think you can ever truly change your style any more than you could change the way you walk. But process, oh yeah, that’s definitely changed.

You both have also written several short story anthologies. Which format do you prefer?

Zafiro: I prefer the novel these days. It just seems like most of the stories I want to tell are of that length. I wrote a lot of short stories years ago, and have just recently written a few again, and really enjoyed it. I don’t consciously try to come up with a novel idea or a short story idea. Rather, I get the idea, and that story has a natural length. One of the things I do like about short stories, though, has to do with the fact that a lot of mine are set in the same universe as my River City series of novels. But in the short stories, I can write something featuring a character who might be pretty minor in the main series, but in this story, s/he gets to be center stage. I can explore some of those side streets and alleyways that I might not get to in the novels.

Wilsky: Both. How’s that for dodging the issue? Honestly, I didn’t start really writing anything that someone might actually want to read until much later in life. So, writing short stories was a natural gateway for me. An old rookie with virtually no literary training whatsoever found a home for telling stories. It’s my first love, so to speak, and I suppose it always will be. They punch hard and quick. It’s a format that I’ve been lucky enough to have a little success with. Writing shorts is very comfortable to me and I still write them frequently. Recently Down & Out Books was even kind enough to publish a collection of them titled Sort ’em Out Later.

I like a novel for reasons that are the exact opposite to all the above. It makes me uncomfortable. Very. It’s not in my wheelhouse. It forces me to not write hard and quick. It’s daunting and challenging. For a long time, I told myself that there was no way I could ever finish a novel. Started quite a few but I would always hit the wall at various lengths. That’s what made the series with Frank so important to me. It made me realize that hey, if I can co-author a novel length book then it’s pretty damn silly to not gut it up and do one on my own.

JIM WILSKY is a crime fiction writer. His first solo novel, titled Cargo, is nearing completion. In addition, he will have a book of selected short stories published later this year. Over fifty of his short stories have been published in some of the most respected online magazines such as Shotgun Honey, Beat To A Pulp, All Due Respect, Yellow Mama, Flash Bang Mysteries, A Twist of Noir and many others. He has also contributed stories to several anthologies, including Kwik Krimes, Both Barrels and The Odds Are Against Us. Jim resides in Texas, supported and strengthened by a wonderful wife and two beautiful daughters.

You can keep up with Jim on his blog. 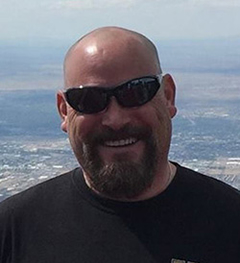 FRANK ZAFIRO was a police officer in Spokane, Washington, from 1993 to 2013. He retired as a captain. He is the author of numerous crime novels, including the River City novels and the Stefan Kopriva series. He lives in Redmond, Oregon, with his wife Kristi, dogs Richie and Wiley, and a very self-assured cat named Pasta. He is an avid hockey fan and a tortured guitarist.