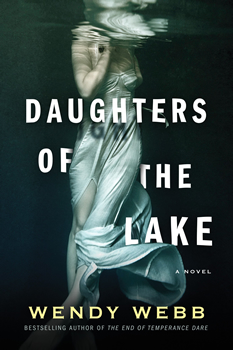 Sometimes, as readers, we don’t know what we’ve been longing for until after it arrives. For instance, the eerie pleasures of a suspenseful, atmospheric novel set on Lake Superior become evident when we wrap ourselves around a sentence such as, “No one who was alive when her body floated onto shore that morning knew anything about her, with the single exception of Kate Granger, who, by no coincidence whatsoever, was in a house that overlooked the very beach where her body now rested.”

This is in the first chapter of DAUGHTERS OF THE LAKE, the latest release from bestselling author Wendy Webb.

Webb began writing fiction following a successful journalism career, beginning with The Tale of Halcyon Crane, a modern ghost story that won the Minnesota Book Award for fiction in 2011. She was dubbed the Queen of the Northern Gothic while publishing novels such as The Fate of Mercy Alban, The Vanishing, and The End of Temperance Dare.

Her new novel, THE DAUGHTERS OF THE LAKE, has garnered praise such as “Well-delineated characters and a suspenseful plot make this a winner” from Publishers Weekly.

Below, she answers some questions about her latest release including what inspired the premise, the challenges of balancing the supernatural with thriller, and more.

Where did you get the idea for DAUGHTERS OF THE LAKE?

I set this book, and my last one, The End of Temperance Dare, in my fictionalized version of Bayfield, Wisconsin. It’s a charming little port city on Lake Superior that is exactly like I describe it in this book—no tall buildings, no chain stores or restaurants, adorable Victorian houses and bungalows, and several magnificent bed and breakfast inns. I rented out one of them, Le Chateau Boutin, for my birthday a few years back and hosted my closest friends and family for a weekend none of us will ever forget. It sparked my imagination to set a story there, and it is the inspiration for Harrison’s House in the book.

Another part of it is the real, historic lore about Lake Superior. The native people who lived on its shores thought it was a living being, and the folks who live there today, as I did for 16 years, won’t say it isn’t. Lake Superior is moody, awesome (in the real sense of that word), and enormously powerful. Some say it’s vengeful at times. Here’s one example. A few years back, a man was trying to swim across all of the Great Lakes. He couldn’t make it across Lake Superior and was interviewed about it. He said: “I don’t know why I can’t make it. It’s not like it’s really superior to the other lakes.” Everyone in Duluth, Minnesota, the port city where I lived at the time, said: “Well, good luck trying to get across it now.” As though the lake heard, and would prevent him from doing it. I wanted to capture that feeling, the real, mystical lore of the lake I love. 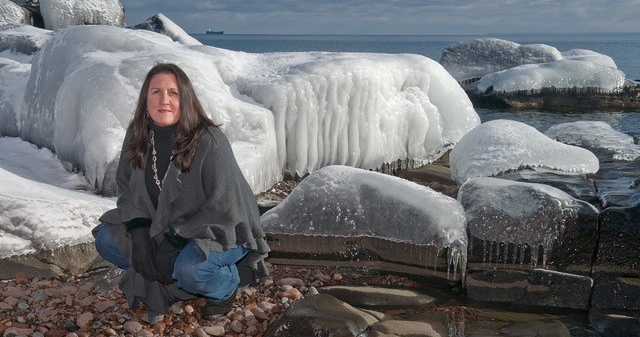 Webb on the shores of Lake Superior

Have the Great Lakes always held special meaning for you?

I love the Great Lakes region. I grew up in Minnesota, so they have always been home to me. I set my first book, The Tale of Halcyon Crane, on an island in Lake Huron. There is just something about these inland seas that is romantic, wild, powerful and awesome. They control the weather around them. We get “lake effect” snow in the winter — unpredicted snowfall just because of the lakes. Minnesota is in the tornado belt, but not near Lake Superior. It protects us from that danger.

When did you discover your affinity for writing these suspenseful, atmospheric, Gothic books set on the Great Lakes?

Apparently, I invented a genre. The Northern Gothic. Reviewers have picked up on that and have started calling me Queen of the Northern Gothic, which is so delightful and flattering. But really, it was unintentional. I just wrote the type of book I wanted to write and set it in a place I knew. And it snowballed from there.

Is it hard to balance the possibility of the supernatural in a thriller?

Not at all. What’s scarier than something you can’t see? Also, “magical realism” was a term that was talked about a while ago, and I really like it, because I am all about the possibility that you can run into something otherworldly in the grocery store. Who knows if that guy on the subway next to you is dead or alive? I love the thought that the supernatural is right here with us, all the time, as real and tangible as you and me.

I have a feeling you don’t write detailed outlines ahead of time.

Never. I tried once, and it felt like I was writing a term paper so I abandoned it and started something else. There’s another reason, too. For me, there’s a magical element in discovering the plot, the twists and turns, and even the characters’ personalities as I’m writing. I love it more than I can describe. I tell this story a lot at my readings when I get asked this question: In The End of Temperance Dare, there’s a scene in which a character discovers a diary. I won’t spoil it by telling the particulars, but I had no idea it was going to happen until I literally typed it onto the page. It scared me so much that I stared at the words for a minute, closed the computer and took my dog for a long walk in the sunshine. Readers have told me it’s a favorite scene of theirs.

How do you make use of your journalist background?

Mostly in research. In writing, it has been a hurdle to get over. Why? Journalists tell a story. Novelists must show rather than tell. It was hard for me to break that habit at first. 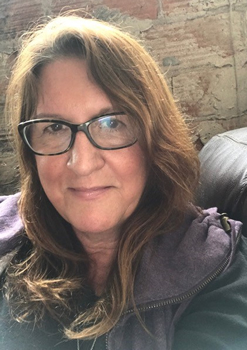 What is the secret for you for writing evocative detail in your suspenseful passages without slowing the pace?

That is a very good question I don’t have a good answer for. I think it’s because I was given some advice early on in my career to write scenes as though I were the director of a movie. So I imagine what everything looks like and feels like and how the characters fit into it all without bogging the pace down with too much detail about the pattern on the china or the window treatments or… things like that.

How do you build on your readership and make contact with people who love your work?

I connect with people on Facebook and Instagram mostly with @wendywebbauthor. Please follow! I’m trying to build my following there. I had a huge following on Twitter but my account got hacked and I had set it up years earlier with an email address that was no longer active, so I couldn’t restore the account. So I’ve sort of lost the love for Twitter. I also do a lot of readings at bookstores and libraries around the country, and I love meeting readers there.

Who are the novelists who most influenced you?

Louisa May Alcott. My grandma read Little Women to me when I was about 10 years old, maybe younger than that. I so identified with Jo March that I felt I was her somehow. Since she was a writer, well, so was I. Louisa is the reason I’m a writer. She is the reason I found my passion in life. I went to her home, Orchard House, recently and took a tour. The docent pointed out the desk where Louisa wrote Little Women and I burst into tears. Ugly cry tears. The docent said to me: “Let me guess. You’re an author.” I nodded. She said, “We get a lot of that.” Other important influences: Shirley Jackson, Daphne du Maurier, Madeleine L’Engle, Anne Rice, and so many of my peers. M.J. Rose, Emily Carpenter, Cat Winters, Simone St. James, Karen White, Erin Hart, and many others.

Who is your favorite character in your own work?

I can’t possibly choose. I fall in love with all of my characters but a couple that stand out are Addie and Jess from DAUGHTERS OF THE LAKE. Theirs is the most romantic love story I’ve ever written, and both of them are so flawed and yet beautiful and so thoroughly human. Jess especially. I’m very proud of how they turned out. I still cry at the end of their story, I love it so much.

The most fun character I’ve written is Amaris Sinclair in The Vanishing. She’s a famous novelist the whole world thinks is dead. She’s not, and hires a companion who is the main character in the book. I intended to make Amaris the bad guy, but the first scene I wrote with her in it, I couldn’t get the image of this elderly woman in a green velour jogging suit and all kinds of bling on her wrists and around her neck, and just like that she became the comic relief in a pretty intense psychological thriller. I can still hear her voice calling everyone a different nickname every time she talks to them, Poodle, Darling, Honey… she was a hoot to write.