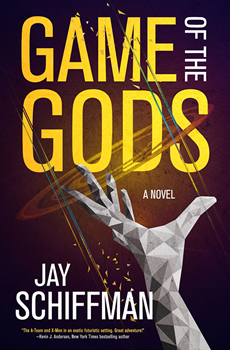 Tired of hearing about the current political craziness? No problem. Jay Schiffman’s GAME OF THE GODS takes us a step further by dropping a political thriller into a dystopian novel setting with stunning effect.

This dark future tale centers on Max Cone, who wants to be an ordinary citizen of the Federacy and leave war and politics behind. Unfortunately for him, he’s too good a military commander, and too powerful a judge, to be left alone. When war breaks out, Max’s skills are needed, but because the Federacy harshly punished his wife, he no longer feels a connection to his country.  In Cone, Schiffman has created a complex, and conflicted, yet likeable protagonist caught in a terrible corner.

“His family is taken,” Schiffman says. “His friends are imprisoned. His allies are killed. He is a military commander and high judge—a natural leader, a natural hero. Despite his reluctance about being a hero once again, he knows that is precisely what he must do.”

Part of the fun of this novel is that Cone must navigate a world that is different from our own, but one that is filled with many of the same political problems. Schiffman has done a masterful job of world building here.

“There are multiple powerful nations and military groups vying for power— the Federacy, Nation of Yerusalom, National Freedom Force, Rogues, Clans of Kolexico and others,” Schiffman says. “Among these nations, some are founded on the idea that men need gods and others that gods need men. Most of the political conflicts in GAME OF THE GODS come back to this fundamental difference.”

Cone doesn’t face this world alone. He leads a quirky group of outcasts—a 13-year-old girl with special powers, a revolutionary turned drug addict, a disciple of the world’s most powerful religious leader, and an insecure math savant. Since the days of Doc Savage, readers have enjoyed such teams, but what makes them so much fun?

“I believe readers like stories about bands of fighters like the X-Men, because we get to experience each member’s special talent and each of their unique perspectives on the world,” says Schiffman. “There is the intragroup conflict that reminds us of what it’s like to grow up in a family or live with a group of close friends and the intergroup conflict of our heroes banding together and fighting others.”

So, in GAME OF THE GODS the outcasts take a while to get to know each other and there is a good deal of tension between characters. That tension always remains, but when the group’s loyalties are tested, they join to fight common enemies.

As mentioned before, this novel crosses genres. It’s speculative fiction that fits into the tradition of dystopian novels — think 1984  — but it’s also an action/ adventure thriller with twists and turns and many surprises. Schiffman says, “I would like to think that GAME OF THE GODS is roughly equal parts speculative fiction, action/adventure, and political thriller.”

It would be giving too much away to reveal who the main bad guy is, but Schiffman does say that in his view, no one is truly evil, so his antagonist isn’t necessarily a villain.

“I believe in moral culpability and that people should be responsible for their actions,” he says. “But I also believe that everyone is constrained by circumstances—upbringing, socio-economic factors, genetics, etc.—and that evil people, or villains, have reasons for being who they are. I am a firm believer that every person deserves our empathy, even people who do terrible things. I similarly think that writers should have empathy for their characters and that good writers should give readers an opportunity to empathize with even the most villainous characters.”

In this case the antagonist does have many qualities that make him a “villain”— arrogance, egocentrism, callousness — but he is portrayed in such a way that the reader can understand where these traits come from, as well as the moral responsibility he should take for his actions.

You might wonder why the future is always so dark in fiction. Like many of us, Schiffman grew up reading the great dystopian novels—Brave New World, Fahrenheit 451, The Handmaid’s Tale, and George Orwell’s 1984, and he enjoys the newer YA versions: The Divergent and The Hunger Games series. What’s great about this sub-genre?

“I particularly love dystopian speculative fiction because of the light these novels shine on present-day problems,” Schiffman says. “Chief among them, the abuse of political power and oppression of minority interests. Through these fictional worlds, we can reflect on complex issues like political alienation, human suffering, and tribalism.”

Indeed, dystopian stories seek truth about the nature of our politics and expose our flaws in meaningful ways.

Fiction isn’t Schiffman’s only gig. Over the last decade, he has started several businesses in technology, education, and entertainment. One of his companies develops mobile games, which could reveal an interesting future for this novel.

“We are focused on the kids’ education and health spaces,” Schiffman says. “But we have developed many different types of games, including a science-fiction interactive narrative game. There is definitely some creative overlap between that game and GAME OF THE GODS and I could see GAME OF THE GODS as a video game. I can see it as an indie game, in the tradition of The Stanley Parable, or a big studio title like Heavy Rain. Either way, it would be awesome.”

And Schiffman says we’ll probably see Max Cone again, but he thinks it will be in a very different way.

“If I write a sequel, I’m not sure I would want Max to be the same kind of hero he was in GAME OF THE GODS.” Schiffman says, “I think it’s time for someone else to be the hero.”

That may be true in the future, but this time around, Max Cone makes GAME OF THE GODS a read worth checking out. 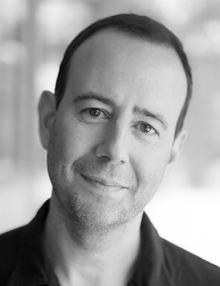 Jay Schiffman is a writer and entrepreneur committed to creating socially responsible businesses. He has started a number of successful companies in entertainment, education, and technology, including an entertainment studio dedicated to developing unique digital content for the public sector. His studio creates award-winning apps, games, digital stories, and animations for public interest organizations, educational institutions, and governmental bodies. Prior to starting his businesses, he was a practicing attorney, taught political science at N.Y.U., and worked in the public and private sectors. He lives in New Jersey with his wife and children.  GAME OF THE GODS is his debut novel.