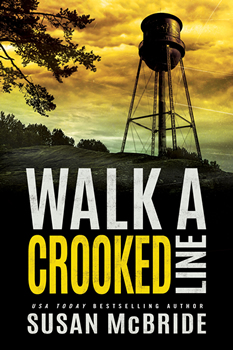 WALK A CROOKED LINE is the second of Susan McBride’s thrillers featuring Texas police detective Jo Larsen. It opens with the discovery of teenager Kelly Amster’s body at the base of the local old water tower in what appears to be a tragic, clear-cut case of suicide. But Jo and her partner, Hank Phelps, still need to find answers as to why a young girl would take her own life. As they delve into Kelly’s past, they don’t find ready answers, but instead the pieces of a dark puzzle that drove her to her death. WALK A CROOKED LINE is a taut, suspenseful read that keeps the reader gripped until the final pages.

There’s much to admire too about the character of Jo, who’s no shiny superwoman but rather a real-life, strong woman who possesses a dogged, admirable courage and belief in doing what’s right. McBride acknowledges that she and Jo share quite a bit in common.

“No matter how different I think my protagonists are from me,’’ she says, ‘’a little bit of myself always works its way in. Jo has a lot of traits that I admire: her strength, her persistence, her determination to get justice for victims. I’d like to think I have her grit, but I’m not sure I do! She survived a lot, yet she never gave up. She’s a detective because she wants her life to matter now in a way that it didn’t when she was a child. And she wants to give voice to those who have lost theirs.’’

There’s another aspect as well that will be familiar to many writers. ‘’I do have this sense of being an outsider looking in, no matter how on the inside I seem. Jo and I share that, for sure.’’

The book deals with some difficult subject matter. In addition to the inciting incident of Kelly’s suicide, McBride also addresses the issue of child and adolescent bullying. While she deals with them with sensitivity and without sensationalism, these aren’t easy topics to research and write about.

McBride says she drew on her personal experience to help her get it right. ‘’I have a young daughter, and I worry about her every day. I see how intolerant and angry so much of society has become. Social media has made bullying a major pastime. I find it horrific the things people will do and say when they’re sitting at a keyboard where no one can see them. I didn’t have to look far to research what it feels like to be a teenaged girl in our society. We don’t make it easy.’’

Social media can fuel other sorts of cruelty too. There’s a secondary story line in WALK A CROOKED LINE about missing dogs and animal abuse. McBride says she came across a real-life example in an article she read about a group of boys in Texas who committed atrocious acts of violence and posted about it on Facebook, like, as she says, the boys ‘’were heroes instead of monsters.’’ It was something that truly fazed her.  ‘’As a mother, it boggles my brain how humans that are not even fully formed can be so brutal. Who has failed here? Is it the parents’ fault?  Is it something broader in our society?’’

Again, this was a very difficult issue to portray on the page and she took great care in how she did it.  ‘’I purposefully avoided graphic violence. What readers learn about the abuse comes via Jo and Hank’s investigation. Even still, it was tough to write. Knowing how much of the secondary storyline was based upon reality broke my heart. It still breaks it.’’

The Jo Larsen series has already been an enormous success, with the first book, Walk into Silence, taking the #1 spot on Amazon in the U.S. and the U.K. McBride is no stranger to writing successful mystery series—she’s previously written the popular Debutante Dropout Mysteries and the River Road Mysteries. Yet the Jo Larsen books feel quite different in terms of tone, being somewhat darker.

McBride has enjoyed exploring that shift in genre, particularly as she’d been a fan of it as a reader. ‘’I’ve always loved reading a variety of mysteries, both light and dark. I devoured the early titles of Janet Evanovich and Diane Mott Davidson, but I also gravitated toward Michael Connelly’s The Poet and John Connolly’s Every Dead Thing.’’

And as it was with the reading, so came the writing. ‘’It wasn’t that big of a deal to write darker books and humorous ones. If you read my lighter books, there’s always something more, beyond the obvious. They often deal with heavy topics, but I pepper them with humor, kind of the same way I deal with awful stuff in real life. I have to laugh, or I’ll go mad. It’s been a real gift to be able to craft such different types of fiction. It’s kept me growing as a writer, and I need that.’’

Whether a mystery is more light-hearted or dealing with sobering societal problems, it is still of course fundamentally a mystery. Given McBride’s experience, she has this helpful advice for aspiring mystery writers. ‘’As a reader, I know what draws me toward particular mysteries: the protagonist and the puzzle. There needs to be something about the main character that engages readers and makes the lead worth rooting for. But I’ve read books where I don’t really love the protag and still get drawn into the whodunit aspect of the book. A wonderfully executed plot is the clincher. So, if you’ve got both of those elements rocking, you’re golden!’’

Writing isn’t the only priority for McBride either. ‘’I’m doing lots of volunteering at my daughter’s school again (yay!). I want to enjoy every minute with her, as she’s growing up so fast. The writing will always be there.’’

Indeed it will, and there’s some good news for fans of Jo Larsen. ‘’I’ve got the third Jo Larsen on my mind,’’ says McBride. “So we’ll see what happens with that.’’

She has another project up her sleeve as well. ‘’I’d really like to finish up a suspense novel I started years ago and got about three-quarters of the way through. It’s in the vein of Rebecca, which I adore. I found all my notes, and there’s a really slick plot twist. Hopefully, I’ll have a chance to finish that one this year.’’ 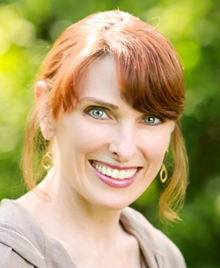 Susan McBride is the USA Today bestselling author of Blue Blood and the Lefty Award-winning, Anthony Award-nominated Debutante Dropout Mysteries, as well as the River Road Mysteries (HarperCollins/Avon). Her debut of Texas police detective Jo Larsen, Walk Into Silence, was a #1 Kindle bestseller in the US and UK, and #3 in Australia. WALK A CROOKED LINE, the next in the series, released in July from Thomas & Mercer. In addition to her mysteries, Susan has authored young adult novels for Random House and women’s fiction for HC/Morrow. Her books have been published in France, Bulgaria, Turkey, Lithuania, and Croatia. She lives in St. Louis with her husband and daughter.