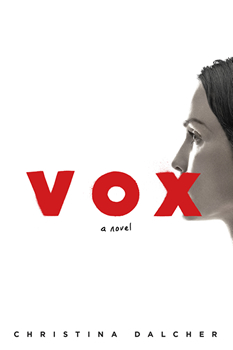 Set in an America where half the population has been silenced, VOX is the harrowing, unforgettable story of what one woman will do to protect herself and her daughter.

On the day the government decrees that women are no longer allowed more than 100 words daily, Dr. Jean McClellan is in denial—this can’t happen here. Not in America. Not to her.

This is just the beginning.

Soon women can no longer hold jobs. Girls are no longer taught to read or write. Females no longer have a voice. Before, the average person spoke sixteen thousand words a day, but now women only have one hundred to make themselves heard.

But this is not the end.

For herself, her daughter, and every woman silenced, Jean will reclaim her voice.

The Big Thrill caught up to award-winning author Christina Dalcher and had a chance to discuss her thriller, VOX:

A lot of readers are probably going to think of VOX as a feminist story. In many ways, it is. But I hope people also see this as a tale about oppression, about the horrors that can occur when a faction—any faction—with a specific agenda becomes so powerful it’s unstoppable. I’m also hopeful readers will come away looking at language differently. It’s a faculty so many of us take for granted, because we all (barring pathological cases) acquire perfect linguistic abilities in our native languages at a very young age. We don’t think about it; we just do it.

VOX is a mashup of genres — part women’s fiction, part dystopia, part political thriller. It doesn’t fit neatly into any particular box, and I think that’s in the book’s favor.

I did need a viable scaffolding to support the main conflict in VOX—the effective removal of language from an entire segment of the population. For that, I dug back to a late-19th-century/early-20th-century movement called the Culture of Domesticity, which removed females from the labor market, believing a woman’s proper place was in the home, submissive to her husband. If that’s a difficult pill to swallow in terms of believability, I should inform you there’s a modern True Woman movement that’s just as anti-feminist. They even have a manifesto.

VOX explores the idea of humans without language. Although in the book’s own time period we never reach a point where the language faculty has been wiped out, that threat looms—the mere idea of visualizing a society where children are language deprived raises multiple questions. What would our world look like if we (or some of us) lost the ability to communicate, to think, to express ourselves?

I’ve been reading Stephen King and Shirley Jackson since I was a teenager — so a long, long time. King’s ability to put his finger on the button of our most primitive fears and desires has certainly inspired me. Jackson, I think, does a terrific job at denormalizing the most mundane of events and social relationship, taking them in turns we never expect. If I could write half as well as these two with their plain but elegant language, I’d be happy.

Christina Dalcher earned her doctorate in theoretical linguistics from Georgetown University. She specializes in the phonetics of sound change in Italian and British dialects and has taught at several universities.

Her short stories and flash fiction appear in over one hundred journals worldwide. Recognitions include the Bath Flash Award’s Short List, nominations for The Pushcart Prize, and multiple other awards. She lives in Norfolk, Virginia with her husband.