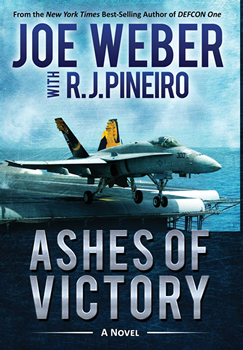 The 1980s and 90s were filled with nail-biting military novels that offered alarming scenarios and were also frighteningly accurate. If you think “they don’t write them like that anymore,” you haven’t read ASHES OF VICTORY by Joe Weber and R. J. Pineiro.

In this novel the unthinkable has happened. The United States is under attack from the air and sea. After thousands of deaths, the U.S. military’s ability to respond is crippled. The key figure dealing with this crisis is the fictional president, Cord Macklin. He knows that he must do something different than his predecessors to win this war of terror—and the authors have created a man who is qualified to take the battle to the enemy.

“Macklin is an Air Force Academy graduate,” Weber says. “He has given and suffered violence while flying F-105 Thunder Chiefs in the skies of Southeast Asia during the Vietnam war—and has the scars to prove it, earned a lifetime ago, along with a Silver Star and a Purple Heart. After getting shot down once, he spent three harrowing days rushing through the jungle with the Vietcong relentlessly hunting him like a dog.”

Despite the history, Macklin doesn’t see himself as a hero, but rather as a veteran with much empathy for all military personnel, present and past.

The best way to highlight a hero’s worth is to pit him against a worthy opponent. In this book that role is filled by aging General Deng Xiangsui of the People’s Republic of China. Much of his motivation is fueled by his old grudge against America for its historical intervention in what he believes is the rightful reunification of the renegade island of Taiwan with mainland China.

“A veteran and hero of what historians call the Second Taiwan Strait Crisis in 1958, General Xiangsui is the vice chairman of the People’s Republic of China’s Central Military Commission and Supreme Commander of the People’s Liberation Army,” Pineiro explains. “He also controls the Politburo Standing Committee of the Communist Party of China, the group of nine men who make all decisions of national significance, including the appointment of members to the National People’s Congress, which in turn elects the president of the PRC.”

General Xiangsui chafes against the way a new generation of PRC leaders is steering the nation toward a possible peace with Taiwan. He forges a secret alliance with an extreme Islam terrorist mastermind. Their plan is to weaken America’s naval presence by enabling terrorists to go after our aircraft carriers as a prelude to invading Taiwan.

This novel depends on both today’s political climate and today’s cutting-edge weaponry—but what qualifies this pair of writers to tackle these challenging issues?

“The short answer is that we’re nuts when it comes to all things military,” Weber says. “We just can’t get enough of it, from its people to its constantly evolving hardware, and feel compelled to bring this passion to the reader in the form of a thriller.”

More specifically, Weber is a former Marine Corps fighter pilot who, as a civilian, has more than 10,500 hours of flight time in 43 different types of aircraft, from gliders to fighter jets and four-engine transports.  Pineiro, on the other hand, is a 30-year veteran of the computer industry, where he worked on the design and manufacturing of computer chips, many of which are still in use by the U.S. military. He is also an instrument-rated pilot, a fire arms enthusiast, and an avid researcher of all things military.

Individually they’ve been published in several languages, been praised by Tom Clancy and Stephen Counts, have placed books on all the major bestseller lists, and received outstanding reviews (including starred reviews in Publisher’s Weekly). Not only do they know what they’re talking about, but readers and experts love their work.

Tom Clancy’s early work, like The Hunt for Red October, Red Storm Rising, and the Cardinal of the Kremlin presented the Soviet Union as the threat. Combating such a centralized force required the United States (and NATO) to build and maintain an equally devastating war machine to achieve détente. But as Pineiro points out, much has changed since then.

“With the fall of the Soviet Union and the rise of new super powers like China, plus the immense threat that is global terrorism, America’s war machine had to change,” he says. “But not as much as people think.“

He points out that the nuclear missile-carrying Ohio-class subs we had back then are still in the arsenal. However, the nuclear-powered attack subs of that time have been replaced by a new generation of nuclear-powered attack subs, the Virginia-class (which they profile in ASHES OF VICTORY). And those are just two of the myriad of technology changes that have altered the face of warfare. Remember, in the 1980s there wasn’t even GPS technology.

The most jarring part of this book for me is that the scenario they paint is very possible. As Weber points out, China is a communist state. But its very smart leadership is allowing capitalism in as a way to turn its nation into a superpower. Pineiro worked in China for three years during his high-tech days because in order for his company to sell its chips to China’s personal computer market, it had to have a factory in China making those chips.

“The industrial cities cranking out the goods and services that are turning China into a superpower are mind-boggling in size,” Pineiro says. “It’s all very real—and very scary, but you really need to see it to grasp its magnitude.”

Weber adds, “Our novel highlights just how much the PRC has come along, and we’re not just talking about nukes. Their aircraft carriers, nuclear powered and nuclear missile submarines, and fighter jets are very close to the best that America has to offer, and in some cases, arguably, better. They currently have 180 satellites in orbit, surpassing Russia’s 140, and they are on the hunt to top America’s 570 satellites. And to that end, they’re in the final stages of developing a land-based laser capable of disabling satellites in low-Earth orbit.”

If you want a tension-filled thriller that accurately shows how all this cutting-edge technology could be used and focuses on the human element that makes it all so dangerous, don’t miss ASHES OF VICTORY. This novel breathes new life into the genre Tom Clancy kick-started more than 30 years ago. 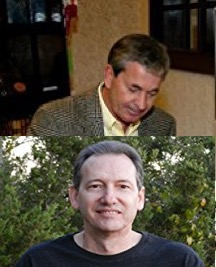 Joe Weber is a former USMC carrier-qualified fighter pilot. His novels have appeared on the bestseller lists of the New York Times, Publishers Weekly, the Associated Press, and the Chicago Tribune. He resides in northwest Arkansas with his wife, Jeannie.

R. J. Pineiro is a thirty-year veteran of the computer industry as well as the author of many internationally acclaimed novels, including The Fall, Without Mercy, and Without Fear. He is an instrument-rated pilot, a firearms enthusiast, and travels extensively to Asia, Europe, and the Americas researching his novels. Pineiro makes his home in central Texas with his wife, Lory Anne.