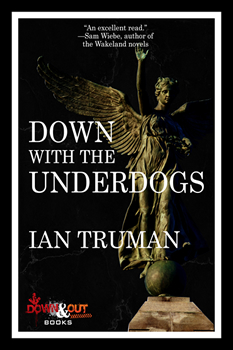 “I’m a working class kid from a generation that speaks in emojis,” says Ian Truman, a Montreal writer with a French accent who has been known to lapse from time to time into Franglais, a patois of English and French spoken by the young and hip in one of North America’s most European cities.

At 35, he is also an up-and-coming writer who is becoming known to audiences well beyond Montreal with the release of his second novel, DOWN WITH THE UNDERDOGS. Told in first person, the novel unwinds the story of D’Arcy Kennedy, a working-class tough guy drawn into employment with the Irish mob during a get-rich-quick gentrification boom that is seeing the old neighborhoods and criminal order of the city upended.

As a writer and Montreal native, Truman knows the subject well. He has watched the rising popularity of this city of 4 million with interest. He said that the city itself it a fascinating mix of languages and accents, with French-Canadians rubbing elbows with newcomers from places like Algiers, and even waves of transplants from France drawn by a lower cost of living and the comfort of French culture.

“You can walk down the street and hear all sorts of different accents,” he says.

While Montreal is a vibrant place to be based, he says that being a Canadian writer has its challenges: “It’s a different market. It’s smaller.” Also, given the travel involved, he says that it’s difficult to tour. “It’s harder to get your name out there.”

And did we mention the long, cold winters?

But that’s okay. He say that Canadians have a strong work ethic to overcome all that. “We’re kind of used to it,” he says. “It makes us work harder for things.”

Something that interests Truman as a writer, and that he said interests other Canadian suspense writers as well, is the psychology of violence and crime. “How does violence happen is more interesting than the violence itself. I don’t appreciate violence,” he says, although readers will find lots of tension and atmosphere in his novels.

He sees this study of the psychology of violence being an aspect of Canadian suspense writers such as Sam Wiebe, John McFetridge, and Catherine McKenzie.

While geography has its challenges, he says that he’s working to reach a wider audience. Recently, he had a story in the Montreal Noir anthology.

In 2013, he won the Expozine Award for best book in English, for his novel A Teenage Suicide.

When he was getting started as a writer, he attended Bouchercon with just enough money for a plane ticket and exactly one night in a hotel, and one clean shirt.

The sacrifice was worth it. “That opened up a few possibilities,” he says.

Also, he recently attended a book fair in Brooklyn.

In helping him down his path as a writer, he sings the praises of his publisher, Eric Campbell, as both an editor and visionary publisher: “That guy is right a lot!”

So how did this working-class kid, emojis and all, end up with a growing career as a writer?

Like any good scribe, it’s often the experiences off the page that lend themselves to fiction. In addition to growing up in a working-class neighborhood, Truman says, “I worked factory jobs that were dangerous, dirty jobs.”

His writing life and his career is more stable now. One of the big boosts to his writing career was earning a BA in creative writing from Concordia University, an experience he says would be hard to be “overly positive” about.

“I landed a pretty good job,” he says. He now has a management job at a local university … and two children. Still, he squeezes in plenty of writing time. With the release of DOWN WITH THE UNDERDOGS, he is working on the third book in the series.

He often works in the coffee shop at a local theater, the Théatre Sainte-Catherine. “I have my little piece of wooden counter that’s my writing space,” he says. He’s been known to eat his lunch in 15 minutes and use the rest of the time to write.

“When I write it needs to be a lot of words on a page,” he said. A good goal for him is at least 1,000 words in a writing session. That adds up to a first draft after three to four months. He then prints it out and reads it on the subway for what he calls a more realistic reading experience.

“I figure that’s where a lot of people read their books,” he says.

As he reads that printed-out draft, he makes marks in the margin where some revison is needed, like when something doesn’t quite read right. He leaves the novel alone for a couple of weeks as part of the process so that he returns to it with a fresh eye—a technique mentioned by a lot of writers. When it comes to developing his plot, he roughs out maybe three-quarters of the story, with maybe 22 ideas that could become chapters.

“It gives you that wiggle room to let the story grow,” he says, adding, “Any story that’s worth telling has to come from the gut.” Ian Truman is a novelist, poet, and visual artist from the East-End of Montreal. He is a fan of dirty realism, noir, satire, punk, hardcore and hopes to mix these genres in all of his works.

A graduate of Concordia University’s creative writing program, he won the 2013 Expozine Awards for best book in English (A Teenage Suicide). His latest works include Grand Trunk and Shearer (Down & Out Books) and a story in the Montreal Noir anthology (Akashic Press).