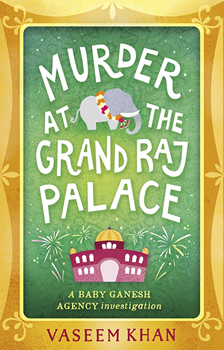 The only thing better (with my crime reader’s hat on) than finding a new-to-me author whose works I really enjoy, is to discover there’s a whole series of them.

I’ve long been a fan of HRF Keating’s Inspector Ghote, so I was delighted to come across Inspector Chopra. Which fictional detectives have influenced him—and you?

Chopra is in his late forties, with a mission—the pursuit of justice in a nation where wealth and influence often means you can escape the consequences of your actions. For 30 years he has trod the streets of Mumbai as a policeman, and he cares deeply about the social ills that he sees in the “super-powered” new society that is modern India. Chopra is a closet anglophile and has a fondness for Holmes, and often chews on a pipe when thinking—though he does not smoke. I too am a fan of Ghote, but my key influence is Louise Penny’s Detective Armand Gamache, a thoughtful, sober man who is universally recognized for integrity and honesty in an increasingly turbulent world. (Of course, Gamache doesn’t have an elephant!)

Speaking of that elephant, you’ve managed to create a unique character—Ganesha— without him being at all twee or unbelievable. How have you pulled off that miracle?

Crime fiction is so crowded that it almost takes something miraculous to think of something new. Casting a baby elephant as a sidekick is a good start, I guess. The trick, of course, is to deliver serious crime stories while still embracing the things Ganesha can bring to the party—namely, a touch of humor and charm. I do this by ensuring that Chopra is the focus. He is a serious man, and the crimes he investigates are serious ones (murder, kidnapping, robbery). Ganesha gets involved occasionally but I try and keep that as light a touch as possible. I also embed him into an environment that isn’t perfect. Modern India is not a Bollywood movie. The disenfranchised and the dispossessed lay claim to each of my books—it’s their stories that I am really trying to showcase here.

Your covers are so striking. How much input did you have into the making of them?

My books aim to take readers on a journey to the heart of modern India, one of the most colorful, vibrant, and conflicted places on Earth. I asked for the covers to reflect this—hence, the “striking” look. And, of course, Ganesha has become a sort of cover mascot on each one, even though Chopra is the lead character. (I should clarify: Ganesha doesn’t talk or solve the mysteries. I think of him more as a metaphor, a symbol of India.)

How do you ensure continuity? Are you a “lots of sticky notes” type or do you keep it all in your brain?

India is so vast—it’s often described as a collection of countries, rather than one nation—that there are endless stories available to me. I am forever juggling them in my head, but it helps to stick them into a great big spreadsheet. In a series like mine it’s important that characters evolve. A large part of that is about putting them in new situations, and I try and keep these situations topical to what is happening in India. This, in itself, gives me a sense of continuity.

What are your tips for other authors writing series, in terms of keeping things fresh with every book and not “jumping the shark?”

The key is to never become complacent. Don’t assume that because you have a loyal audience that you can get away with lazy plotting, or sloppy characterisation. Each entry in the series must be self-contained, but have enough of ‘what made it work in the first place’ to satisfy regular fans. It’s a tricky balance, and critical to it is to “identify your identity” (ie. the tone and audience expectations of your series) and stick to it.

In an era when so many detectives seem obliged to have unhappy home lives or character flaws, Chopra appears to be a decent man with a great wife. (She’s a brilliant creation.) Was this a deliberate choice? How does his private life affect his work?

Chopra is very deliberately the antithesis to many detectives in Western set fiction. I wanted him to stand apart not only from such mavericks, but also to shine as a beacon of light in the Indian police service, which is known for incompetence and corruption. For him to do that I knew he would need a stable home life and someone who could serve as his anchor. Poppy is that person. She is a woman who knows her own mind and isn’t afraid to express it. She tends to the emotional, but has dealt admirably with the disappointments that life has thrown at them (for instance: they have been unable to have children). Like Chopra she is resolute in her belief in social justice in a country where inequality is rampant. Chopra draws strength from this. He is a decent man; and Poppy is a decent woman.

The Grand Raj Palace hotel seems to have the sort of clientele many hotel staff would dread. Are any of them based on real people?

The Grand Raj Palace hotel is based on India’s most famous hotel, The Taj Palace, in Mumbai. This is as iconic as any monument on the subcontinent. It is said to have come into being when India’s richest industrialist, Tata, was barred from entering the nearby Watson’s Hotel over a century ago because of its “whites only” policy. He was so incensed that he vowed to create a hotel more opulent than anything the country had ever seen. And that’s exactly what he did. The Taj Palace is where anyone who is anyone stays when visiting Mumbai. Billionaires, prime ministers, sports stars, musicians, icons of stage and screen. From the Beatles to the Obamas, they’ve all stayed there. In my book I try and bring the grand old hotel to life—it makes the perfect enclosed setting for an Agatha Christie style murder mystery, when an American billionaire dies suspiciously in one of the rooms, following an art auction at which India’s most expensive painting is sold. The story takes Chopra into the past and allows me to explore a dark chapter in Indian history.

In your bio you mention being a cricket fan. What’s your take on the recent scandal of Australian cricketers tampering with the ball using sandpaper?

In India cricket is a religion—together with Bollywood it permeates popular culture in a way we cannot comprehend in the West. Chopra is a fan of the game, one of those things an author gives to his characters from his own persona. As for sandpaper-gate … I agree with the bans, but the truth is, the Aussies aren’t the only ones at it. Cricket is traditionally a game of fair play—the gentleman’s game. Cheating isn’t on.

Hear, hear! And long may Chopra carry on detecting in a fair and decent fashion, to the delight of his fans.

Vaseem Khan is the author of the Mumbai-set Baby Ganesh Detective Agency series featuring Indian detective Inspector Ashwin Chopra and his baby elephant sidekick. His first book, The Unexpected Inheritance of Inspector Chopra, was a Times Bestseller and an Amazon Best Debut. The second in the series, The Perplexing Theft of the Jewel in the Crown, won the 2017 Shamus Award for Best Original Private Investigator Paperback. His books are described as ‘gritty cosy crime’ and aim to take readers on a journey to the heart of modern India. Vaseem works at University College London’s Department of Security and Crime Science.

To learn more about Vaseem, please visit his website.