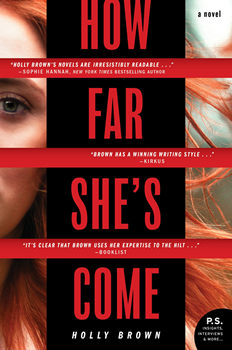 In Holly Brown’s latest release, HOW FAR SHE’S COME, we have the story of 24-year-old Cheyenne Florian, who has just received the type of job offer that dreams are made of and then some. Plucked from relative obscurity as a vlogger, Cheyenne has been headhunted to be the new correspondent on the recently formed Independent News Network.

But that dream quickly turns sour when she realizes that age-old workplace dynamics are in play at the seemingly innovative network, and she’ll have to contend with seething resentments, jealousies, and sexual harassment. Things take an even more sinister turn when Cheyenne discovers a mysterious diary written by a female broadcaster in 1991 featuring startling—and frightening—parallels to her own life. It becomes clear that she’s a pawn in a very twisted game, and she’s going to have to win it for her own survival. It’s a fast-paced and intriguing read that keeps the reader turning the pages.

The book’s pace was partly driven by the real-life news events underpinning it. Brown says she tends to be inspired by contemporary events and phenomena and with this novel, it’s the #MeToo movement as well as recent political events. There were a couple of times when the sheer speed and volume of revelations made it difficult to keep a handle on what was coming to light.

“Initially, the stories were coming fast and furious,” she says. “I didn’t have to rewrite, but I did add or replace references.” Yet the premise for her plot remained sound, which is a source of some frustration to her. “The reason that I didn’t change the plot is because, while some bad apples have been shaken out of their trees, the systematic and cultural forces that enable the most extreme cases—and the lesser, everyday crimes that are perpetrated all the time in terms of women not being promoted or just generally being demeaned, disrespected, and/or propositioned—are still very much in place.”

Brown’s plot is also backed up with careful research. “So much research! The book required a lot of research into the world of morning TV shows and cable news, past and present, as well as into sexism and sexual harassment, then and now. I had to educate myself first, and the plot was derived from all that I learned. I have a bibliography in the back that includes all the books I read, though I also did a lot of Googling and just leaping from one article to the next, following any lead, not worrying about what would be usable or relevant, just thinking in terms of what interested me and sorting it out later.”

As with any research for a novel, Brown couldn’t include it all. “One of the things that I could only touch on a little bit and that both fascinated and frightened me was the extent of the pressure on journalists to tell a certain story that’s favorable to government.” And that wasn’t a new phenomenon but one that stretches back through other administrations. Yet Brown believes this should be confronted. “We can’t avoid knowledge because it runs counter to our hopes. We can’t just subscribe to our own favorite fake news and expect democracy to thrive.”

The novel is told in two points of view, through the perspective of Cheyenne’s character and the author of the diary that she finds. Although the journal and its parallel story are nearly three decades old, 1991 is the recent past, which makes for an interesting dynamic.

That date was a conscious choice for Brown. “I grew up in the 1990s so I have my own recollections of that period and a certain fondness for it. Also, there were some interesting rivalries at that time, [such as] Katie Couric as a plucky upstart challenging the sleek blonde status quo. So I knew it would be that era. It became 1991 specifically because I could really underscore how much has changed, and how transformational technology has been, since 1991 was the year of the first mobile phone in Finland and the debut of the World Wide Web.”

Speaking of the WWW, social media and its use/abuse are an integral part of the plot and of Cheyenne’s life. Brown has wondered what a 24-year-old from 1991 would make of the social media of 2018. “I imagine there might initially be a sort of shocked paralysis at how invasive social media is and how fast it moves, but once that wore off, the addiction would set in. That’s because so much of social media is calculated to keep us enthralled. It taps into our lizard brain and the need for stimulation. It also taps into our insecurities and need to present a certain façade while comparing ourselves to others.”

As to the next steps for social media, Brown has concerns. “There’s an interdisciplinary field called persuasive technology that I think gives a lot of frightening indications as to where social media is headed. Persuasive technology is about incorporating psychological insights into the design of technology devices and apps—basically, it’s a way to get us even more hooked than we already are, and kids and teens are particularly vulnerable given their rapidly developing brains.”

Those concerns are reinforced by Brown’s other career as a therapist. “I’ve been surrounded by the complexities of personality for the past 15-plus years. I don’t want to sound alarmist, but I do think people need to know what they’re dealing with. The addiction to technology isn’t accidental; it’s by design.”

Brown is looking to the future with regard to her own career as well. “I’d really like to stay in the lane of workplace thrillers. I find different workplaces to be anthropologically fascinating, and they allow for a breadth of potential settings and opportunities for suspense. I know I’ll never be bored, and I hope my readers won’t either.” 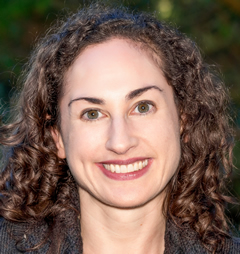 Holly Brown lives in the San Francisco Bay Area with her husband and daughter, where she is a practicing marriage and family therapist.

As a writer, she tends to be inspired by contemporary events and phenomena. She likes to take an emotionally charged situation and then imagine the people within it. That’s where her background in human dynamics comes into play, and where the fun begins.

With HOW FAR SHE’S COME, her inspiration came from a surprising source: the incredibly uninspiring 2016 U.S. presidential election. Donald Trump’s ascension to the highest office in the land after his (on-tape!) brag about groping women raised some disturbing questions about how far women still have to go to achieve not just equality but safety. Yet since she wrote that first draft, she’s been heartened by the surging women’s movement, and she’s thrilled to be part of the conversation and, hopefully, the revolution that will lead to evolution.