Making Miami His Own 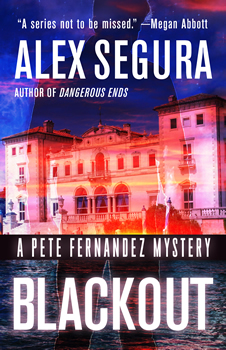 Miami is a city that everyone feels like they know, even if they’ve never set foot there. It’s alternately a vacation paradise and a dangerous town generating national headlines. Miami definitely dominates television series and films, with its beaches, palm trees, and South Beach glamor. And then there are the novels set there, a cottage industry all its own.

But for Alex Segura, who now lives in New York City, Miami is something very particular. The author of the Pete Fernandez mystery series says, “I was born and raised there, and I try to keep my connection to Miami as strong as I can, living somewhere else. We visit as often as we can, and so that keeps me tuned in to how Miami today is different from the Miami I knew as a resident. But my South Florida is just that: mine. It’s based on my experiences as a kid who grew up in the suburbs and experienced Miami as a place where I lived, as opposed to a tourist destination or vacation spot. It was home.

“I feel like a lot of books default to the ‘Florida Man’ and ‘wacky Florida’ side of things—which is fine, and there’s an audience for that—but I wanted to drill down and explore the city as I remember it and experience it, as this beautiful, tropical place that has a seething, dark undercurrent, as a place that isn’t just about beaches and relaxing but a sprawling city with a variety of neighborhoods and people with different cultures and perspectives. Miami often finds itself at the nexus of national and worldwide stories and is loaded with amazing characters and shocking crimes—so I wanted to bring a little bit of that up to the surface. My books deal with Pete’s past and his family’s past a lot, but they also do the same for Miami—the past and the city’s history cast a long shadow over the series.”

It’s a treatment of the city that clearly works, with the latest novel in the series, BLACKOUT, winning a tidal wave of advance praise. “One of the most anticipated crime, mystery and thrillers of 2018,” says Lithub.

Pete Fernandez is a Miami journalist, specifically a sports reporter, who has left the newsroom behind to become a private investigator. On creating the character, Segura says, “He kind of showed up fully-formed, which I realize isn’t a sexy answer. Before I started writing Silent City, the first book in the series, I had an idea of what I wanted—a flawed person who was not yet a P.I., but would, if everything worked out, become one. I wanted to reveal the origin of a private eye, as opposed to jumping into the story midway.

“I also knew I wanted it to be set in my hometown of Miami and to feature a Cuban-American lead,” Segura continues. “I’d been reading a lot of P.I./crime novels that really emphasized setting—in the same way Chandler’s L.A. is so essential to Marlowe. Books like Laura Lippman’s Tess Monaghan/Baltimore series, the Nick Stefanos/DC books by George Pelecanos and, to a degree, James Ellroy’s L.A. Quartet. So I had the parameters in place, and then Pete walked in. What made him click for me was the idea that I, personally, could have known Pete growing up—that maybe we had similar experiences—but at a certain point, he veered off, and now I’m finding him at a low point. I wanted a character who wasn’t perfect, who was frustrating but also exuded smarts and good instincts. I wanted a three-dimensional person, basically, not an homage or an idea.

“Pete has overcome a lot over the first four books of the series—he’s dealt with the death of his friends, the end of a relationship that he thought would lead to marriage, his father’s passing and, most importantly, giving up his addictions. That evolution was possible because I had a really firm idea of who he was when I started, and then I got to riff off that and put him in situations that would move him along—so each book feels like an epic moment or stretch of events as opposed to just being the next case.”

When told that in real life, Pete Fernandez is not much like Alex Segura, Segura laughs and says, “Yes! I get the ‘Are you Pete?’ question all the time, and thank you for pointing out that we’re very different. Maybe, in another life, I was more like Pete, but certainly not now. I love Pete, obviously, but I wouldn’t want to be him. Especially when I put him through what I do in each book. Maybe I’ll give him a break someday!”

What Segura is also known for is his work in comics. He is the co-writer of The Archies and writer of Archie Meets the Ramones. He’s also the editor of Betty & Veronica: Vixens, Josie and the the Pussycats and Jughead: The Hunger. His day job is being co-president of Archie Comics.

On the question of how writing in the two different mediums affect each other, Segura says, “Novel writing is slow-moving and solitary, but you’re in complete control. If I want Pete to start dressing like a clown and eating only walnuts, I can do that. He’s mine. In comics, you’re working with a team of people. I write the story and an artist interprets that, then a letterer and then a colorist chime in, usually. And in my experience, I’ve only ever written characters that are company-owned—so, with Archie, I have a specific sandbox. I can’t cross certain lines. That doesn’t lessen the fun, mind you, it just means you have rules to follow, which can sometimes be energizing creatively.

“Comics have taught me to write visually—when I’m putting together a comic book script, I’m writing notes to the artist and keeping my dialogue tight, so their work can shine. That makes me, as a novelist, think more about visuals and engaging the reader. So I tend to not over-describe in my prose because I want the reader to take what I do offer up, in terms of descriptions and detail, and form their own picture. Nothing disconnects me from a book more than overwrought descriptions. Just yanks me out of the narrative. Comics has also taught me, in the same way journalism has, to be fast. To put in the work because deadlines matter. I don’t think you need to write every single day to consider yourself a writer, but you need to write often and a lot, and when you’re not writing, you need to be reading and researching. Comics need to be produced quickly and with little fanfare, and that mentality has helped me in my novels.

“On the flip side, my novel writing has helped me think bigger with comics—in the sense that I see each comic as an installment of a bigger work. So, with The Archies, for example, it’s one big adventure, with smaller episodes tying together. They’re both really exciting mediums to be a part of.” 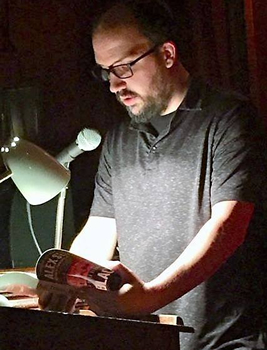 Segura is very active in crime-fiction groups in New York City, organizing Noir at the Bar readings and appearing at other events.

So what best builds an author profile that will lead to success?

“Here’s the truth—there’s no magic bullet,” he says. “At least not in terms of publicity or marketing. The best thing an author can do is write the best book they can. Pour yourself into that book—edit it, rewrite it, revise, get feedback, rewrite again. Only then, when you feel like the book is as good as it can get, should you worry about the promotional side. The best ammo is a good story, and then it becomes a question of getting the book in the right hands at the right time—early enough to generate some buzz and, ideally, word of mouth. Once people are buzzing about your book independent of your own efforts to promote it, then it takes a life of its own, which is what you want.

“But in terms of in-the-weeds promo, my suggestion would be to do the things that have value, in terms of audience reach or relationships and exposure. I’m not of the mind that you should do anything and everything. It waters down whatever you’re trying to say. You want to take the opportunities that help you get new readers, so that’s something I try to keep in mind when considering press or events.”

My Mother’s Secret by Sanjida Kay