Inside a Wonderful, Wicked World 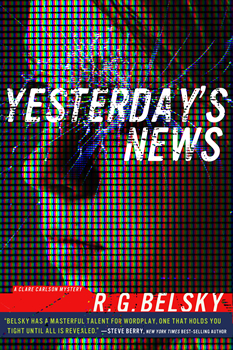 I’ve interviewed numerous authors for The Big Thrill. But I must confess, R. G. Belsky’s YESTERDAY’S NEWS is a standout. I’m especially drawn to good mysteries that throw the reader for a loop because you don’t know the whole truth until the end (think The Sixth Sense or Gone Girl).

Belsky’s protagonist, 45-year-old Clare Carlson, is a media superstar reporter and Pulitzer Prize winner for her coverage of the disappearance of 11-year-old Lucy Devlin. The story is written in the first person, and Belsky uses the concept of the “unreliable narrator.” Although Clare isn’t actually lying to you and me, she’s just not telling us the entire truth. One of the things I love about this book is that, in Belsky’s words, “that truth is parceled out in small amounts until the final ‘all is revealed’ moment at the end.” What if the facts of this child’s disappearance aren’t what they seem? What if there was another whole story to be told about what actually happened? The result is YESTERDAY’S NEWS, Belsky’s 11th novel.

YESTERDAY’S NEWS started as a standalone, but Oceanview thought it was so good the publisher turned it into a series. The next Clare Carlson novel, The Cinderella Murders, launches in 2019. Belsky says, “Clare is a TV executive who misses being a working journalist. So she finds herself still getting involved in big crime stories at the station where she works. Clare is one of these journalists (and I’ve met many of them over the years) who becomes obsessed by the big stories they are covering.”

Belsky at an editorial meeting at NBCnews.com

Her obsession with crime stories is one of the qualities that make Clare such a fascinating character. Married three times with no current love interest, she throws herself into work where news is everything to her. “I tell the story in the book of how one of her ex-husbands had their divorce papers sent to her in the newsroom, rather than her home, because he knew that was the best way to get them to her.” In Clare’s own words: ‘I was covering a high-rise fire at the time, and I didn’t open them (the divorce papers) until the fire was out.’

I know you’re already headed to your computer to order this first installment, and I can’t blame you, but first let me tell you a little more about this amazing author. R.G. Belsky has been writing for his entire career. “I think the most unique element that sets YESTERDAY’S NEWS apart from other mysteries on the market is my long background as a tabloid journalist,” he says. Starting out covering fascinating real life news stories in New York City, he was the metropolitan editor of the New York Post, where he was part of the editorial team that produced the legendary headline, “Headless Body in Topless Bar.” A holdup man shot someone in a topless bar, cut off the head, and took it with him when he left. How incredible is that? Later in his career, Belsky was managing editor at New York Daily News, news editor at Star Magazine, and most recently managing editor of NBCNews.com. 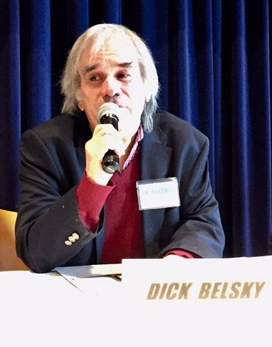 When people ask him where he gets ideas for his mysteries, he says, “I just go to work every morning.” Stories for his plots await him there. He has been on the forefront, writing about some of the biggest stories of our time: Son of Sam, O. J. Simpson, and many more high profile crimes. His books deliver an authenticity when it comes to both covering crime and describing what it’s like working in what he calls “the wonderful, wicked, and wacky world of New York City media.”

Although his female protagonist is a fictional character, she’s a composite of a lot of Clare Carlsons—male and female—he’s known over the years as a reporter. Why a female lead character? Belsky explains: “For some reason, I just find them more fun to write about than men.” When I asked him who he would choose to play the lead role of Clare Carlson, he said, “If Scarlet Johansson, Charlize Theron, or Jennifer Lawrence want to talk, I’m happy to do lunch anytime.”

As for his writing process, Belsky says he’s a total pantser, never outlined in his life and wouldn’t even know how to do it. “When I start a book, I know the beginning and I have a general idea of how I think it will end (although this can change, too). I then have to figure out how to get from beginning to the end, which to me is the fun of the writing process.”

When I asked him about his process, he said he didn’t require himself to glue his butt to the chair when beautiful weather beckons (a la Dorothy Parker). Instead, he said he always preferred this Raymond Chandler description for what a writer needs to do: “The important thing is that there should be a space of time, say four hours a day at least, when a professional writer doesn’t do anything else but write. He doesn’t have to write, and if he doesn’t feel like it, he shouldn’t try. He can look out of the window or stand on his head or writhe on the floor. But he is not to do any other positive thing, not read, write letters, glance at magazines, or write checks. Either write or nothing . . . I find it works. Two simple rules: 1. You don’t have to write. 2. You can’t do anything else. The rest comes of itself.”

Belsky writes in the mornings. As he goes about his day, he’s still thinking about what he wrote and what comes next. He gets ah-ha moments walking or driving. Sometimes he stops walking or pulls the car over to write his ideas down. He has never had writer’s block, almost never sits down to a blank page, and usually has a good idea what he plans to write. 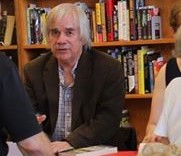 But perhaps one of the most fascinating facts about this man is that, unlike many writers who need quiet, Belsky actually prefers distractions. “Probably because I’ve spent so much time writing in noisy newsrooms. I need people around me. I simply can’t write in solitude or total quiet. Most of the time I have music blasting or write in crowded and noisy places—coffee shops, on the beach, even in bars and restaurants. For me, all those distractions inspire creativity in my writing.”

Belsky first got the writing bug as a journalist. After reading his first Raymond Chandler novel, The Big Sleep, he decided to give fiction a shot. He sold his first novel in 1985 and has been hooked ever since. People he worked with constantly asked him how he could work all day on newsroom stories and write mysteries in addition to that. He said it was because they are two entirely different things. “In a newsroom, the most important thing I need to worry about is making sure all the facts in my story are accurate. When I write a mystery, I get to make everything up. How great is that?”

Bryan Robinson
Bryan E. Robinson is the author of 35 nonfiction books and two murder mysteries. His latest book is DAILY WRITING RESILIENCE: 365 MEDITATIONS & INSPIRATIONS FOR WRITERS. His books have been translated into thirteen languages, and he’s been featured on 20/20, Good Morning America, ABC’s World News Tonight, NBC Nightly News, NBC Universal, The CBS Early Show, CNBC’s The Big Idea. Robinson maintains a private psychotherapy practice and lives in the Blue Ridge Mountains with his spouse and four dogs. Visit him online at www.BryanRobinsonBooks.com.