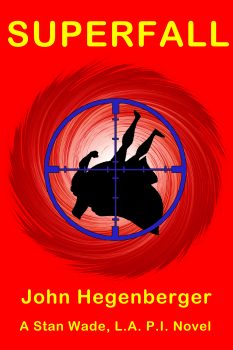 When it comes to writing mysteries, John Hegenberger doesn’t mess around. He has authored three series in three different historical time periods: Stan Wade, LAPI in 1959; Eliot Cross, a Columbus-based PI in 1988; and Ace Hart, a western gambler from Wyoming to Arizona in 1877.

In SUPERFALL, Hegenerger’s latest Stan Wade installment is set in 1959 Hollywood.  America’s TV superhero takes a bullet to the head in an apparent suicide. But was it really suicide? And is he really dead? PI Wade battles the mob, Federal agents, and the Soviets, taking readers on a supersonic ride “faster than a speeding bullet.”

In the following interview, Hegenberger shares with readers of The Big Thrill different aspects of his prolific writing life and the historical themes that permeate his several mystery series.

The reviews for SUPERFALL have been very positive with descriptors such as “a rollicking trip,” “faster than a speeding bullet,” and “a ripping adventure.” What additional adjective (or adjectives) would you use to set the book apart from others on the market?

I’ve coined the term “Noirstalgic” to indicate all the troupes of noir fiction, plus a funny thing happened on the way to the mean streets. Witty, droll, clever, and suspenseful; that’s what I aim for in most cases.

You ask a lot of legitimate questions and I apologize in advance for being a wise guy, but that is what hard-boiled PI’s do, right?  They crack wise  … which partially explains why Spyfall, an earlier entry in the series, won a recent Comedy Mystery award.

The protagonists of your different series live in different time periods. Can you describe your interest in these historical periods versus contemporary times?

I’ve lived through a lot, so why not share a little? I try and put as much of my own past into the historical fiction.  I love fiction when it blends with history.  I think the sub-genre is called “Secret Histories.”  A good example is Nicholas Meyer’s The Seven Percent Solution, where Sherlock Holmes meets Freud. John Jakes wrote The Bastard series that placed his characters in critical historical points from the pre-revolutionary war to the 1930s, loaded with famous Americans. In the “Young Indiana Jones Chronicles” TV show, the main characters met John Ford, Mata Hari, and Lawrence of Arabia.  We don’t know everything about the past, so the door is slightly open for fun “what-if” adventures.

If you wrote like that with all the fantastic things happening to a character in a contemporary setting, it would seem flat-out impossible.  But by placing the story in a historical period, readers can suspend their disbelief as I have my private eye character, Stan Wade, meet Walt Disney, George Reeves, Mickey Cohan, Johnny Mercer and Bobby Darin, all in the same week.

How does the mid-century Stan Wade series compare to Eliot Cross in 1988 and Ace Hart in 1877?

Stan Wade, LA PI, is more fun, because 1959 was sort of a golden age in America. Disneyland, NASA, and a huge batch of private eye shows on TV.  Stan has more fun and is much more fun to write. I like Stan. Eliot, not so much. He’s in 1988 and much more noir. I’m just getting to know Ace, so we’ll have to see.

Tell us something about your series or you as a writer that isn’t mentioned in the publisher’s comments.

The Stan Wade series puts the reader in 1959 Hollywood.  If Stan reads the headlines or ball scores in the newspaper, the reader sees the exact historic information as Stan.  If Stan switches on the television, the reader sees the exact show of that day and hour.  Hit tunes of the day play on the car radio.  The issue of Time Magazine that Stan reads is exactly the one that came out that week and the articles, news stories, tunes, and shows always have some faint connection to the events in the novel.  For example, when he meets Peter Lawford, it’s the exact week that Lawford’s PI series on TV, has been cancelled … and they mention this.  I research hard and am constantly fascinated when the facts fit the fiction.

It is generally agreed that novels are a three-part process: imagination, personal experience, and observation. How much of you or your experience is in your novels? How close are the characters to your own experience?

I’ll tell you a secret. Everything is true … give or take a lie or two.  These so-called novels actually happened … in my head. They are as real as Sherlock Holmes, Santa Claus, and Sam Spade.  Have fun!

What was your most exciting aspect to research?

I research like mad.  And I learn that many of the truths of today were hidden in the past. Most folks in 1959 had no idea that there were missiles in East Germany pointed at London, years before the Cuban missile crisis—but we know that now, and it goes into the plot of Spyfall. Also, at the end of each Stan Wade novel, there’s a section entitled The Facts Behind the Fiction, where readers can gain insight and perspective of the story’s events.

Describe your writing process. Do you outline your plots or create biographies of your characters? Or do you let the story develop as you write? Does your expected cast of characters expand/contract as you write the story?

Yes.  I plot, pants, develop, and expand.  I use sticky-notes, timetables, and character sheets.  I discover many secondary characters as I write.  The novel I’m currently writing takes place in nine different counties and has a half dozen main characters.  When it’s all over, however, I find that a good writer is like The Shadow, who has the ability to cloud men’s minds so they cannot see him.

What specific writers or books have influenced your writing?

Writer Dorothy Parker said, “Writing is the art of applying the ass to the seat.” When beautiful weather beckons, what strategies do you use to glue butt to seat?

I go to the Algonquin Club and sit next to Dottie as she punches me in the arm until I get up and write. I hike a lot too, so I get plenty of weather and still managed to do plenty of writing.

Historically, famous writers have said they get their best ah-ha moments for characters, plot, and other story elements when they’re moving around: moving furniture, cutting grass, washing the dog. When do your ah-ha moments come?

Hard work for the ah-ha’s, but a shower often refreshes me and I find new bits of business to enhance the stories. Keeps me smelling minty fresh, too.  I believe that when the “hind brain” is busy driving or hiking, the “fore brain” is free to wander and wonder.

Dean Koontz said he’s a potential slacker: “I have a sofa on which I never nap, big windows with an ocean view that I rarely see, because I keep pleated shades down at all times while working.” Douglas Preston said, “I need to write in a small room. I can’t write in a big room where someone might sneak up behind my back.” Firefighter Brian Panowich wrote in a closet at the firehouse where he worked. I have a breathtaking view of the Western North Carolina Mountains from my home office, but I choose to work downstairs in a cave with no windows so I’m not distracted. What are your requirements for creative writing?

Paper and lots of sharp pencils. No television. Coffee. I write everywhere. I got five pages last week while setting up for a signing at the library. The work never stops. Help.

Some writers have difficulty with sustaining the trajectory of their literary careers. Having written several series, what’s your secret for writer sustainability?

No secret. The opportunities find me every day. My job is to improve the quality of today’s output and be a better writer than yesterday. All good writers do that, I think.

The New York Times best-selling author Ron Rash said writer’s block makes him want to jam pencils in his eyes. Have you ever suffered from writer’s block, blank page syndrome, dry well syndrome, or the sophomore slump? If so, how did you get past it?

Sorry. I don’t get writer’s block. I get writer’s shock when something new develops in the plot or when a character says something that I never thought of before.

After completing a novel, some authors have post-birth blues. Truman Capote said, “Finishing a book is like you took a child out in the back yard and shot it.” ITW’s debut author Dana Carpenter said sometimes when she finishes a book, she feels as if a good friend has hung up the phone in the middle of a conversation. Other writers say completing a mystery/thriller is a huge unburdening. Describe what ending one of your series is like for you.

There is a warm satisfaction to ending a book. The finish is a wonderful sensation of a job well done. When I go to the theater, I like to walk out thinking, “That was good. When’s the next one?”

If your Eliot Cross series were adapted for television or film, who do you see playing his role and some of the other character’s roles in SUPERFALL?

I have always pictured Stan Wade as being played by a young Anthony Perkins, right before appearing in “Psycho” for Hitchcock.

When did you first get the writing bug? What was your first writing gig and how did that come about? Do you think you’ll ever quit writing?

I started writing in junior high school. I got serious during college. I just kept at it when the opportunity arose. One of these days, I’ll make it. I don’t think I’ll ever stop.  Thanks for asking a great batch of insightful questions. 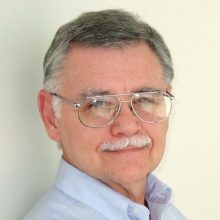 Born and raised in the heart of the heartland, Columbus, Ohio, John Hegenberger is the author of several series: Stan Wade LAPI in 1959, Eliot Cross Columbus-based PI in 1988, and Ace Hart, western gambler from Wyoming to Arizona in 1877. He’s the father of three, tennis enthusiast, collector of silent films and OTR, hiker, Francophile, B.A. Comparative Lit., Pop culture author, ex-Navy, ex-marketing exec at Exxon, AT&T, and IBM, happily married for 46 years and counting. Active member of SFWA, PWA and ITW.

Bryan Robinson
Bryan E. Robinson is the author of 35 nonfiction books and two murder mysteries. His latest book is DAILY WRITING RESILIENCE: 365 MEDITATIONS & INSPIRATIONS FOR WRITERS. His books have been translated into thirteen languages, and he’s been featured on 20/20, Good Morning America, ABC’s World News Tonight, NBC Nightly News, NBC Universal, The CBS Early Show, CNBC’s The Big Idea. Robinson maintains a private psychotherapy practice and lives in the Blue Ridge Mountains with his spouse and four dogs. Visit him online at www.BryanRobinsonBooks.com.