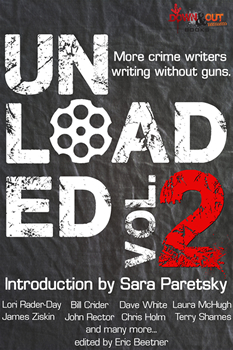 Unloaded was an Anthony-nominated anthology that asked writers to tell a crime story without one of the genre’s most common props: guns. Now editor Eric Beetner is back with another collection of great stories in UNLOADED VOL. 2: MORE CRIME WRITERS WRITING WITHOUT GUNS.

For this anthology, Lori Rader-Day, Bill Crider, and 22 other respected crime, suspense, and thriller writers have used well-crafted fiction to call for a sensible and reasoned debate about guns in America. Beetner says the idea was born out of the conflict between his personal feelings about guns and the way he was portraying firearms in his writing.

Beetner found several other writers with similarly conflicted feelings and decided that it wasn’t enough just to rant on social media about mass shootings and access to military-style rifles. And when he went looking for contributors to his themed anthology, he found it was incredibly easy to recruit them.

“Nearly everyone I reached out to was immediately enthusiastic about the project,” Beetner says. “Admittedly, I went after people [whose feelings on the subject were clear from their social media feeds], so I wasn’t asking anyone blind about what their politics were on the issue. But I was amazed at how easy it was to get people to spend their time and talent writing me stories I told them up front they were not getting paid for.” [Proceeds from both volumes are donated to States United to Prevent Gun Violence, a non-profit organization devoted to state-level action. – Ed.]

In these stories of crime, mystery, and suspense, these authors have left the guns out to show that, at least for a short while, they can do without them and the plot doesn’t fall apart. Beetner says everyone did it to support the cause of common sense gun control. But that doesn’t mean it’s simply an addition to the mountain of cozy mysteries that are published every year. Like its predecessor, UNLOADED VOL. 2 is an eclectic collection.

“The only restriction I gave the authors was that no guns were allowed,” Beetner says. “So beyond that they could let their imaginations fly. And boy did they. I have a mix of writers from hardboiled to cozy, and some who hadn’t written a short in many years. When the stories started coming in they were all different in tone, in subject, and in the substitutions people made where a gun might be the easy choice for a plot point.”

After everything from killer clowns to bloody hammers in the first volume, the writers got even more creative for the new collection. As Beetner explains, “We have an ape on the loose, androids, punk rock shows, a story written in ever-shortening sentences where each line has one word fewer than the line before until it ends in a single word. Plus, we have a non-fiction story about a real life encounter with gun violence that is really powerful. For that one I allowed guns on the page because the impact of a true-to-life story involving a near tragedy is an important one to hear.”

Given the intense feelings on both sides of the gun control debate, one can’t help but wonder if readers who are anti-gun will enjoy the stories more than pro-gun readers. Beetner admits that he would be naive to think a great collection of short stories would change people’s minds, but he hopes the volume will at least spark some thoughtful discourse.

“My hope is that people on the side of reason will see a collection like this, enjoy the stories for what they are, and come away at the end with the impression that the guns weren’t missed,” he says. “I’ve never advocated for taking away people’s guns or going to the extremes organizations like the NRA would have you believe people on the left side of the issue want, but I don’t think fewer guns in America or a general change in the culture of guns as something paramount to be American would end freedoms.”

There’s always a risk that highly charged political issues might distract readers from the quality of the storytelling, so one of the stipulations Beetner gave the authors was that he did not want overtly anti-gun stories.

“The stories themselves are not political in any way,” Beetner says. “With no guns in play either on or off the page, the issue just never comes up, the idea being that we can remove them from the plot and still deliver an exciting story. In this very small way we can show that if you take away guns the whole world doesn’t fall apart, again in the way we’re being fear-mongered into thinking.”

But how did these thriller writers handle the assignment? Was it tough for them to come up with great crime stories without guns involved?  As it turned out, several writers said they really enjoyed the challenge. According to Beetner, none of the contributors struggled with the collection’s theme or felt they couldn’t tell an exciting, suspenseful, or mysterious story without guns. In fact, the idea had an effect beyond the two dozen authors who crafted stories for this volume.

“I got Sara Paretsky to write the introduction for VOL. 2,” Beetner says. “She sent me an email a few months later to tell me that she had been thinking about the issue and that she had taken the challenge to heart in her upcoming VI Warshawski novel. She had been all set to have VI pull a gun and then changed the story to take the guns out. She realized it wasn’t necessary.”

Beetner hopes there will be no need for a third volume, but regardless of where you stand on the issue, you’ll enjoy some great, thought-provoking writing when you pick up UNLOADED VOL. 2.