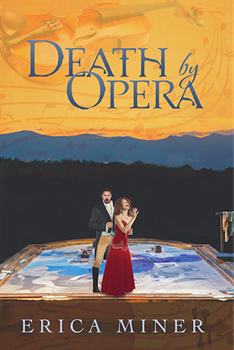 During the last few years of her 21-year tenure as a violinist at the Metropolitan Opera in New York, Erica Miner found herself captivated by the endlessly fascinating intrigues that took place there—on and off stage.

“That’s what first inspired me to capture those plots and characters and bring them to life in fiction,” she says. “Between the murderous plots onstage and the murderous rivalries that I observed backstage, there was a seemingly limitless treasure trove of material to write about.”

Not to mention a setting ripe for danger and suspense— an opera house abounds with dark corners, hidden hallways and out-of-the-way stairways; heavy scenery is constantly being moved around; there are potentially dangerous elevator shafts everywhere.

Add in huge egos that tend to collide under stress, and “you’ve got the perfect formula to depict nefarious situations.”

“It was all about the opera,” she says. “It can kill you—seriously.”

So it would seem if Miner’s latest thriller, DEATH BY OPERA, is any indication. Here, in The Big Thrill, the author dishes on the inspiration for her new novel, and gives insight into the world of an opera singer.

Like many of us, you’re a great fan of Agatha Christie. Which is your favorite of her books?

When I’m asked what is my favorite opera, my list includes what I call my top five—and “anything by Mozart.” The same holds true for Christie. I’ve always named Murder On The Orient Express as my favorite—with anything involving Miss Marple holding down the “Mozart” category. Since my own mysteries involve a more “cozy” character who keeps finding herself embroiled in dangerous situations that require her to think on an entirely different level from her artist’s soul, I can relate closely to Jane Marple’s less professional compulsions and motivations, and her sharp-edged approach to solving murders. On that level, Murder at the Vicarage gets my vote for my favorite in the Marple category. You’ve got to love an author who said, “The best time for planning a book is while you’re doing the dishes.”

You lecture on cruise ships, so do you have some stories to share?

I once was fortunate enough to have a birthday during one of my lecture stints. Our dinner staff planned a birthday celebration and kept it a total surprise. At the end of meal, a Baked Alaska the size of a small dinghy, complete with sparklers that lit up the dining hall, was set in front of me. I was flabbergasted!

On the subject of dinner companions, we once had an especially lively older man at our table, who had an obsession for Cheez-Its, which are American square crackers flavored with (horrors!) American cheese, that I imagine only Americans could appreciate. Every night at dinner, he talked endlessly about those crackers as the only thing lacking when it came to the food on the ship. After a week of filling our head waiter’s ears with stories describing the delights of Cheez-Its, on the final evening of the cruise, the waiter ceremoniously placed a silver-covered dish in front of our talkative companion. When he lifted the cover, there sat an enormous silver bowl filled with – you guessed it – Cheez-Its.

As a closed community, a ship would be a great setting for a mystery. Would you be tempted to set a book on a cruise?

The final episode of my first published romance novel, Travels with my Lovers, takes place on a cruise ship to the Bahamas. While this wasn’t a mystery, the atmosphere in and around that Caribbean island is quite mysterious in many ways. Like an opera house, a cruise ship has so many dark corners and hidden stairways. And because a ship is populated with such a huge variety of people, you could cast a wide net for intriguing characters of varied backgrounds to draw from.

Opera performers have a bit of a reputation. What’s the worst behavior you’ve witnessed?

Opera performers are certainly extremely temperamental. There’s so much more at stake for them on this world operatic stage than for other artists, and I absolutely love replicating their behavior in my novels. Tempers flare. Egos burn. A relatively famous early 20th century Viennese conductor once said, “Every theatre is a madhouse—but an opera theatre is a ward for the incurables.” Truer words were never said.

How do you tread that fine line between truthful representation of a profession and falling into cliché?

It all comes down to many years of experience and keen observation. Although my stories are entirely fictional, I’ve tried to make sure the background and atmosphere of the opera houses is authentic, and my depictions of the characters are wholly based on what I see as the most accurate account of how they actually speak and comport themselves. Like many actors in straight theatre, opera singers often perform as if they were perpetually in some theatrical forum. Everything is a drama. I try to replicate that in my own dialogue writing. What’s fun is the contrast between the borderline melodramatic behavior of those performers and the more down-to-earth characters (read: orchestra players).

You use an appropriate operatic quote at the start of each chapter. Why?

It occurred to me that, with all the treachery going on onstage in the operas themselves—life imitates art imitates life—why not highlight these wonderful situations with quotes from the actual operas that reflect both the opera stories and the story of the novel itself? Many of my readers tend to be well versed in opera lore, so the quotes make the whole experience that much more fun, for them and for me as well.

Which characters in DEATH BY OPERA were hardest to write?

For me, the villain is always the most difficult. There can be a fine line between portraying sheer evil without the character coming off as two-dimensional or superficial. In fact, I often go through multiple possibilities to choose the most appropriate character for the perpetrator. Motivation is very important: a killer is not born; he or she develops and evolves over a lifetime of situations that form his or her personality and drives them to murder. Creating this truth and making such a character believable is a huge challenge.

The easiest to write was the protagonist, since she is based on myself as a young violinist and her personality traits reflect my own in many ways. In a certain sense, writing her was like a foray into exploring my own feelings about life, music, and the very intense experience of being part of creating a musical happening that is being shared and enjoyed by thousands of people night after night in one of the world’s most prestigious venues.

Former Metropolitan Opera Orchestra violinist ERICA MINER now enjoys a multi-faceted career as an award-winning author, screenwriter, arts writer and lecturer. Erica performed with the prestigious Metropolitan Opera Orchestra for twenty-one years, a high-pressured milieu but the pinnacle of her field, where she worked closely with numerous luminaries of the opera world.

After retiring from the Met, Erica moved to the West Coast, where she studied screenwriting and won awards in such recognized competitions as Santa Fe, WinFemme and the Writer’s Digest. Her debut novel, Travels with my Lovers, won the Fiction Prize in the Direct from the Author Book Awards. She then published the first novel in her Fourever Friends series chronicling four teenage girls’ bonding through classical music in the volatile ’60s. Her thriller Murder in the Pit, a novel of assassination and intrigue at the Metropolitan Opera, has won rave reviews across the board. DEATH BY OPERA, her sequel to Murder in the Pit, is due for release in June 2018.

Erica’s lectures, seminars and workshops have received kudos on both coasts and as a top-rated special lecturer for Royal Caribbean Cruise Lines. She has presented frequently for the Wagner Societies in New York, Boston, San Francisco, Los Angeles and San Diego. Her lecture topics include “21 Years at the Met: How I Learned to Love the ‘Ring,'” “Wagner and Bernstein: Parallels and Contrasts,” “Journaling: The Write Way to Write Fiction,” “Solving the Mystery of Mystery Writing,” “Opera Meets Hollywood,” and numerous others.

As an arts writer, Erica is an active contributor to: BroadwayWorld.com; US Bachtrack.com; and LAOpus.com. Details about Erica’s novels, screenplays and lectures can be found on her website. She also contributed a monthly article series for the National Association of Baby Boomer Women newsletter. Erica is a member of American Theatre Critics Association (ATCA). She regularly presents for the Osher Lifelong Living Institute at the University of California San Diego and the Creative Retirement Institute at Edmonds Community College in the Seattle area.