A car lies at the bottom of an icy ravine. Slumped over the steering wheel, dead, is the most critically acclaimed horror writer of his time. Was it an accident? His son Milo doesn’t care. For the first time in his life, he’s free. No more nightmarish readings, spooky animal rites, or moonlit visions of his father in the woods with a notebook and vampire make-up.

Or so he thinks.

Milo settles into a quiet routine—constructing model Greek warships and at last building a relationship with his sister Klara, who’s home after a failed marriage and brief career as an English teacher. Then Klara hires a gardener to breathe new life into their overgrown estate. There’s something odd about him—something eerily reminiscent of their father’s most violent villain. Or is Milo imagining things? He’s not sure. That all changes the day the gardener discovers something startling in the woods. Suddenly Milo is fighting for his life, forced to confront the power of fictional identity as he uncovers the shocking truth about his own dysfunctional family—and the supposed accident that claimed his parents’ lives.

The Big Thrill caught up with author Michael Barsa to discuss his debut novel, THE GARDEN OF BLUE ROSES:

This book is written in the tradition of gothic horror–quite self-consciously so. The narrator, Milo Crane, has been steeped in his father’s horror books all his life, and now he wonders whether one of those books has come to life for real. So the book deals with what it means to read, to write, and how we’re all influenced by the stories we tell and hear.

I discovered that every book lays out its own path, and there’s no use fighting it. I never plan what happens next as I write. I allow the characters to take the lead. So the entire book was really a journey of discovery–for me as well as for the reader. I was surprised by every twist and turn.

I’ve always been influenced by authors who have a strong and distinctive voice, and authors who are not afraid of darker material. Such authors include Shirley Jackson, Edgar Allan Poe, Patricia Highsmith, and Henry James. They’re all masters of their own styles. 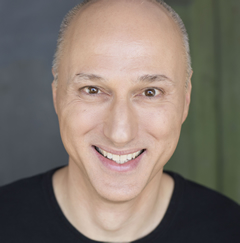 Michael Barsa grew up in a German-speaking household in New Jersey and spoke no English until he went to school. So began an epic struggle to master the American “R” and a lifelong fascination with language. He’s lived on three continents and spent many summers in southern Germany and southern Vermont.

GARDEN OF BLUE ROSES is his first novel.