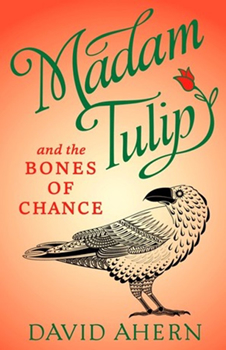 Irish American, Derry O’Donnell is a talented actress looking for her next big role, but in real life show business isn’t all glitz and glamor, in fact “…as Derry’s awesomely successful mother liked to point out, show business was no kind of business at all.”

Even the cost of a cup of coffee is a commodity, so Derry also moonlights as mystic to the rich and famous, Madam Tulip. Her new persona has led her into the world of secrets, money, and murder. Now she’s back in the third instalment of the Madam Tulip series in MADAM TULIP AND THE BONES OF CHANCE uncovering more mysteries, this time in a Scottish castle.

Author David Ahern tells The Big Thrill why he was inspired to write about a crime solving fortune teller.

“Derry is a teeny bit psychic, but when it comes to solving mysteries that’s no help at all. The thing about fortune telling for the wealthy is that where you’ve got money and secrets, you’ve got trouble. In MADAM TULIP AND THE BONES OF CHANCE, Derry gets to act in a movie being shot in Scotland. She soon discovers that someone is determined to kill.

“I grew up around theatre people, and I love actors. They’re dedicated to their craft and they want so much to perform and grow. But in most places, and in Ireland especially, the work just isn’t there. So most actors are unemployed much of the time and moonlight at something. The thing about fortune tellers though is that people tell them all kinds of things they wouldn’t tell anyone else. Add secrets to celebrity and money, and a fortune teller may learn some things they’d be safer not knowing.”

Although born in Ireland, Ahern spent much of his adult life living in Scotland and has an affinity with both the place and the people, so it may seem natural to want to set the latest Derry story in the Highlands, but the story also centres around an unglamorous movie shoot. I asked Ahern about his background in the film industry and the insight he’s used for this latest story.

“I think I was on my first movie set at eight years old, and I’ve worked on many movies, including some wonderful turkeys. Movie-making is most interesting when the project is coming apart at the seams (as long as you’re not owed money). So no research needed.”

Any good whodunit has a wealth of suspects and in MADAM TULIP AND THE BONES OF CHANCE, Ahern draws upon a new film set of colorful characters to drive his mystery, as well as some consistent faces, such as Derry’s friend and colleague ex-navy man turned actor, Bruce. I asked Ahearn who is favorite new face is.

“That’s a tough one!  I like all my new characters. I do have a soft spot for Richard, an older, experienced actor who sees in Derry the courage all true actors must have.”

But balancing a broad cast can be tricky, especially when it comes to keeping the reader engaged and guessing, and Ahern explains how he manages this. “Mysteries are a kind of game you play with the reader. You need to obey the rules, of course, but inside those you have a lot of freedom. Balance is down to your own judgement and, hopefully, as a writer you get better at that as time goes by.”

Another challenge when writing a cozy mystery is balancing humor with serious mystery. Ahern writes his Madam Tulip mysteries with a dry wit, especially when he focuses on the acting community, drawing on his knowledge of the profession with a cynicism that can only come from a veteran of the industry, which is apparent immediately from the opening paragraph.

“Many people doubt psychic powers exist, but the doubters do not include actors. Everyone in show business knows that as soon as one actor learns of a casting, actors of all ages, ethnicities, creeds, and genders are instantly aware of every detail. Einstein claimed that faster-than-light communication is impossible. Einstein was not an actor.”

Ahern explains why his witty narrative of the acting world is more natural than intentional. “Anyone who follows a career in any branch of show business, and I include myself, is out of their minds. The part where your parent says get a proper job? I hate to break the news…”

Until he gets “a proper” job, Ahern is continuing to work on the Madam Tulip series and is currently working on book four, sending Derry back to her roots with an Irish adventure.

You can catch up with Derry in MADAM TULIP AND THE BONES OF CHANCE, out this month. Or start the series with the earlier books Madam Tulip and Madam Tulip and the Knave of Hearts, both available now. 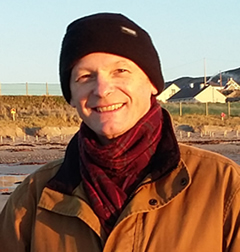 David Ahern grew up in a theatrical family in Ireland but ran away to Scotland to become a research psychologist and sensible person. He earned his doctorate but soon absconded to work in television. He became a writer, director and producer, creating international documentary series and winning numerous awards, none of which got him free into nightclubs.

Madame Tulip wasn’t David Ahern’s first novel, but writing it was the most fun he’s ever had with a computer. He is now writing the fourth Madam Tulip adventure and enjoys pretending this is actual work.

David Ahern lives in the beautiful West of Ireland with his wife, two cats and a vegetable garden of which he is inordinately proud.