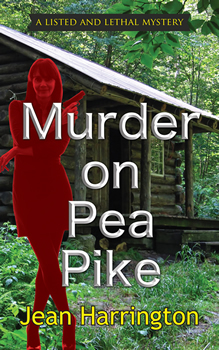 Jean Harrington is an established author in murder mystery writing. Her tongue-in-cheek cozy mysteries, published by Carina Press and Camel Press, are a must-have beach item this summer. Harrington took some time to talk to me about her latest book, MURDER ON PEA PIKE, a mystery thriller with a witty twist.

In a break from Harrington’s Murders by Design series set in Florida, MURDER ON PEA PIKE, the first in her Listed and Lethal Series, is inspired by a country girl moving to a big city and trying to establish herself in a new life. Unlikely hero Honey Ingersoll is trying to pull herself out of poverty. Her effort and failure mirrors her attempts to solve the mysteries she encounters, but in eventually solving them, Honey unravels more of her own problems.

“It’s pretty much a given that readers of mystery-thrillers are also fans of puzzles. So with  Honey Ingersoll as the unlikely sleuth, the question isn’t only ‘who dunnit’ but also: how can a girl like Honey possibly solve the crime? Watching her do so, against the odds, is a big part of her appeal,” Harrington says.

Honey relocates to Eureka Falls, a fictional town in Arkansas, giving Harrington the creative freedom to invent her setting against the familiar backdrop of a great natural landscape and traditional American values. Honey snags a job with realtor Sam Ridley, but is Ridley everything he seems? During the sale of an abandoned warehouse, Honey encounters her first crime—murder. This marks the first in a series of murders and surrounding mysteries that Honey must unravel.

“The uncut diamonds featured in the plot were suggested by the Murfreesboro Crater of Diamonds State Park where people can actually pan for diamonds. I’m not sure how well known this is, but Arkansas contains some of the largest gem deposits in the United States. So this was a logical, fascinating bit of geology to bring into the story,” Harrington says.

“Another plot trigger was suggested by the clever (and legal but secretive) method used to obtain the Disneyworld acreage in Orlando. But now I’m verging on a spoiler, so enough said!”

But Honey isn’t alone in solving these mysteries. Coupled with Sheriff Matt Rameros, Harrington has created a dynamic between the pair that will likely keep readers asking “will they won’t they” for many books to come.

“Sheriff Matt is Honey’s foil. He’s the professional law man who tempers her crime-busting enthusiasm with cool, reasoned logic. He has rugged, hairy legs and a degree in psychology, both of which appeal to Honey, though she’s hell bent on carving out a career in real estate and isn’t ready to commit to any man. At least not yet.”

Harrington’s narrative is delivered with a slick, feminine humor, from Honey’s unique perspective. “I found that playing with the language was great fun for me. In other words, whenever my main character was on the scene, that had to be written in ‘Honey-speak’, a challenge to adapt my vocabulary and voice to hers,” she says.  But this “tough-in-cheek” wit is counterbalanced by an appreciation for the devastation of the crimes committed. “Murder, the ultimate crime, is taken with the utmost seriousness by my characters, who work tirelessly to discover the killer. Witticisms along the way enliven the journey to truth.”

MURDER ON PEA PIKE is the first book in the new series, but book two, Murder on Moon Mountain, is in the process of being edited for publication. Harrington also tells me that she has just typed “The End” to book three, Murder on Sugar Street. What can readers expect from the series in the future?

Harrington promises that Honey will “become more polished as time goes on,” will use fewer y’alls, and “will still hate raw salads, liars and dirty, rotten killers.” 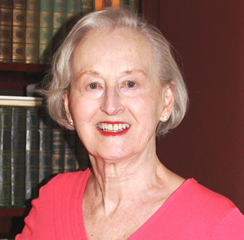 Jean Harrington is the author of several tongue-in-cheek cozy mysteries, including the award-winning The Design is Murder from the Murders by Design Series. Before turning to a life of crime, Jean taught literature and the forms of discourse at Becker College in Worcester, Massachusetts. More recently she has served two terms as president of her local southwest Florida chapter of RWA and is a current member of ITW and MWA. Jean and her husband, John, are the parents of two grown children and three grandchildren. Life is good, she says, and death is fascinating.