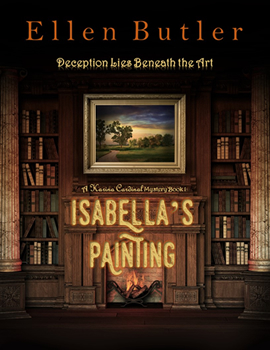 Peeling back layers of lies could save a masterpiece…or reveal a killer.

After a long week lobbying on Capitol Hill, all Karina Cardinal wants to do is chill with Netflix and her boyfriend, Patrick Dunne. Instead, she’s slipping her aching feet into red stilettos for his parents’ annual holiday bash. When she accidentally interrupts Patrick’s father in his study, her embarrassment is tempered by suspicion that Martin Dunne and his dapper, secretive guest are hiding something. Maybe the painting she barely glimpses right before it disappears behind a secret panel.

An internet search raises her curiosity to full-blown alarm. If she’s right, Martin is in possession of a stolen masterpiece. Infamous because everyone close to it has turned up dead. As in Mafia-style-execution dead.

As she’s chewing over which instinct to follow—back off while she still can, or dig deeper for the truth—she crosses paths with FBI agent Mike Finnegan, an old friend and not-quite flame from her college days. When she looks into his warm, mocha eyes, she’s tempted to tell him everything.

Trouble is, she’s already being watched. And the next move she makes could destroy innocent lives…including her own.

First, I hope readers take away a sense of excitement about our new heroine, Karina Cardinal, an intelligent D.C. lobbyist with a sharp wit, and a curiosity to rival Jessica Fletcher. Karina’s inquisitiveness pulls her into one adventure after another occasionally putting herself or those she loves into danger. Any reader interested in rooting for a strong female lead won’t be disappointed in Karina. Currently, there are four Karina Cardinal adventures in the works. The second novel will be out at the end of 2018, so readers will only have to wait seven months for the next adventure.

Additionally, the stolen artwork featured in the novel has an exciting true crime story surrounding it. I hope it inspires readers to reach further and take some time to research the Isabella Gardner Museum heist on their own. Maybe one of my readers will know where the real artwork is currently hidden.

ISABELLA’S PAINTING is an excellent contribution to the genre not only due to its intricate and fast-paced story line, also because of today’s current events. The author, Ellen Butler, is relatively new to the male dominated thriller/suspense/mystery and looks to bring a predominantly female perspective into the genre. With the ongoing Women’s movements in the news, it’s time to see more women get a seat at the table for this genre. It is also the reason the author chose not to use a gender neutral pseudonym.

Absolutely! About three years before deciding to write this book the author saw a short clip about the Isabella Stewart Gardner Museum heist. That’s what spurred Ellen to write a story around the art. Further research revealed a variety of theories as to where the art went and where it is now. Discussions with FBI agents provided even more questions than answers. The biggest surprise: of the 13 items stolen from the Museum on that fateful night in March 1990, NONE, not one of the items was insured. Heartbreaking. All of the museum’s subsequent actions into find the missing art was paid for out of its own operating budget.

The FBI believes they’ve identified the perpetrators of the Gardener Heist. Unfortunately, both men are dead. One died of natural causes. The other … found shot to death in the trunk of his car. And he wasn’t the only person connected to the heist who died of unnatural causes.

When it comes to action/suspense, I’m a fan of Janet Evanovich’s Stephanie Plum series because they are always creative, zany, and make me laugh. Some of her characters seem to be more like caricatures than real people, but they provide for excellent comedy. They were the inspiration for Karina’s neighbor Mrs. Thundermuffin, an eccentric old lady with some eclectic fashion choices.

Elizabeth Peters/Barbara Michaels was also a big influence. I began reading her stories in high school, and continue to reread them today. Her heroines, Vicky Bliss, Amelia Peabody, and Jacqueline Kirby, were always intelligent and strong. Often, those women didn’t need a man to solve the puzzle. Her passing back in 2013 was a sad day for the writing community.

Ellen Butler is a bestselling novelist writing critically acclaimed suspense thrillers, and award-winning romance. Ellen holds a Master’s Degree in Public Administration and Policy, and her history includes a long list of writing for dry, but illuminating, professional newsletters and windy papers on public policy. She is a member of International Thriller Writers, Virginia Writer’s Club and the OSS Society. She lives in the Virginia suburbs of Washington, D.C. with her husband and two children.