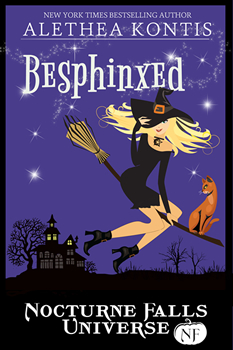 Fairy tales are just part of Alethea Kontis’ DNA. For much of her career she has retold stories from the Brothers Grimm, Hans Christian Andersen, Mother Goose, and more. In her YA Nocturne Falls Universe trilogy, the fairy tales she tells are her own.

BESPHINXED, Kontis’ third entry in the Nocturne Falls shared universe series, finds Owen Liddell in big trouble. One hundred years ago, as a poor boy, he was tricked by a descendent of Arachne into staring into the eyes of the Great Sphinx, leaving him bespelled into the form of a cat. Now Arachne’s spider-sisters have found him while his heart is all tangled up with the most popular witch in school. Heather Hayden is a mean girl Gothwitch who has looks, money, and power along with a family who treats her like she’s nothing. As if this weren’t enough, Heather has a history of torturing Owen’s best friend, Kai. Can he possibly escape the evil spider sisters, thwart the spell he’s under, rescue the poor rich girl, and save his friendship with Kai—all before finals and the Zombie Prom?

“Working on the Nocturne Falls Universe IP has been an incredibly unique experience,” Kontis said. “[Author and NFU creator] Kristen Painter handpicked the authors for the NFU books. She not only encouraged us to write series within her existing series, but she also encouraged us to use our books to launch our own worlds.

“My background is in fairy tales—MG/YA is definitely my wheelhouse. What inspired this series, though, was Mummy’s Diner. The original Nocturne Falls series constantly references this diner and its delicious food. My first thought was, ‘Well if it’s that good, it’s obviously run by Greeks!’ I had never before had the opportunity to write a young heroine with my own Greek background, and the thought made me dance with joy. I could finally name characters after people in my family! Everything else just fell into place.”

This led to the first novel in the trilogy, The Truth About Cats and Wolves, which tells the story of Kai Xanthopoulos, whose family owns the diner. The second novel, When Tinker Met Belle, is the story of Kai’s best friend Bellamy, a fairy. The last book was to center on the third friend, Maya, “but readers loved Owen so much that I wrote book three about him instead, tying up his storyline from book one,” Kontis said. In BESPHINXED, Owen finds a home and a surrogate family within the confines of the diner and its employees.

“Writing these books was so much fun,” Kontis said. “Because the NFU authors were given so much freedom, I think it actually made everything easier and [enjoyable]—we got to play in an already established world and create our own characters and worlds to boot. I believe readers can tell when an author is having fun, and they enjoy reading it all the more because of it.”

Speaking of fun, a key to much of Kontis’ work and her Nocturne Falls trilogy is her humor. She recalled in her one and only creative writing class the instructor warned to never write comedy, as it was one of the hardest forms to master. Yet according to Kontis, “I sold my first book, an alphabet book called AlphaOops: The Day Z Went First, when the head editor of Candlewick called to tell me that the entire department was cracking up over the manuscript.”

Humor kept showing up in Kontis’ subsequent books, including her YA Woodcutter Sisters series.  “It wasn’t until I read a slew of reviews for [the third Woodcutter Sisters installment] Dearest saying it was ‘the funniest book of the series so far’ that I realized…I was writing comedy,” she said. “And even more crazy: I was good at it. So, I now give myself permission to be as ridiculous as I want. Thus adding yet another element to the fun I’m having with my writing!”

Despite the fun and laughter, there is a serious side to Kontis’ work. For example, BESPHINXED required some research about the Catastrophe of Smyrna, a 1922 fire that destroyed much of the city. “The Catastrophe of Smyrna is part of my own family history, so most of the research I did there was just to check dates,” Kontis said. “I did more research on the Great Sphinx. I also did quite a bit of research about chocolate chip cookies. Truth be told: I don’t like chocolate chip cookies at all.”

There are underlying messages as well. Themes of acceptance, tolerance, and understanding can be found throughout the trilogy—though sometimes these elements happen unbeknownst to the author.

“[In BESPHINXED,] I thought I was writing a book about a shallow Mean Girl and a lazy, self-serving Cat-Boy who really deserve each other as punishment,” she said. “I was apparently too talented (or not talented enough) to pull that off. These characters became so nuanced and made me care about them so much…I didn’t realize how deeply they touched me until I was already crying over the manuscript.”

Recognized or not, BESPHINXED is filled with second chances and self-care. “I think self-care is an incredibly important topic for young people today,” Kontis said. “If this book encourages even one reader—young or old— to forgive themselves and ‘do better next time,’ then I have made the world a better place.”

While she has no immediate plans to return to the Nocturne Falls Universe, Kontis is keeping herself busy. A short list of what she’s working on includes “new audio podcast narrations for IGMS [InterGalactic Medicine Show] and EscapePod, a new Fairy Tales of Arilland chapbook, two picture books, two short stories that I’ve been asked to contribute to anthologies I can’t tell you about without killing you, a middle grade novel series, and a new website. Oh! And I’m teaching online classes now—I have a short story workshop for teens launching in June. Aaaand I’m going storm chasing in mid-May with my friend who’s a photographer, author, and 20-plus year storm-chasing veteran. I’ll be making my Storm Chaser’s Apprentice Diary exclusive to my Patreon supporters. I can’t wait!”

To learn more about the various worlds of Alethea Kontis, BESPHINXED, and the rest of her Nocturne Falls Universe trilogy, check out her website. 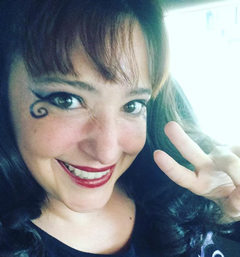 New York Times bestselling author Alethea Kontis is a princess, a voice actress, a force of nature, and a mess. She is responsible for creating the epic fairytale fantasy realm of Arilland, and dabbling in a myriad of other worlds beyond. Her award-winning writing has been published for multiple age groups across all genres. Host of “Princess Alethea’s Fairy Tale Rants” and Princess Alethea’s Traveling Sideshow every year at Dragon Con, Alethea also narrates for ACX, IGMS, Escape Pod, Pseudopod, and Cast of Wonders. Alethea currently resides on the Space Coast of Florida with her teddy bear, Charlie.