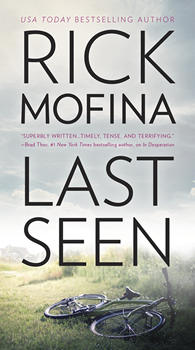 Not all great thrillers are about global threats. Rick Mofina has created a pulse-pounding nail-biter focused on a single family’s trials in his latest standalone, LAST SEEN.

The story centers on Cal Hudson, a reporter who seems to be living the dream: he’s got a great job, a devoted wife, a loving son, and a home in a tranquil suburban community. That dream becomes a nightmare when the unthinkable happens, and his nine-year-old son is snatched. Hudson is a regular guy and a good man who, as it turns out, has done some terrible things and managed to keep them secret.

“His heart’s in the right place,” Mofina says, “but he’s far from perfect and when all seems lost he’s uncertain he can do the right thing.”

That may not make Cal a hero in the traditional sense, but it certainly makes him interesting. That’s one way this is not your typical thriller. Another is that the reader does not learn who the villain is until late in the narrative.

“We have a lot of suspects and a lot of threads that are tied to all the characters,” Mofina says. “The antagonist is woven into the fabric of the situation and emerges near the end.”

That doesn’t mean that LAST SEEN is totally plot driven. Along with that strong storyline there is no shortage of interesting, engaging people. Mofina clearly feels that a good story must have both: compelling, realistic characters and threatening situations that test them. The author may have a unique perspective on good people in menacing circumstances thanks to his own extensive career as a reporter.

“As a journalist you often meet people at the most dramatic times—perhaps the worst times—of their lives, and your job is to find the story and make sense of the situation and report it to the community,” he says. “It’s never easy, like asking a grieving parent for a photo of their child, or trying to convince detectives to share a critical piece of their investigation. Having done that so many times helped me shape Cal Hudson and the crisis he faces in LAST SEEN.”

Thrillers often depend on action and suspense, but the best of them also have something to say. After his long string of successful novels that work as both entertainment and literature, I asked Mofina if in fact every good book had to have a theme.

“It’s not so much that stories need a theme,” he says. “I think if a story is well told its themes will become evident. With LAST SEEN, I’d say themes of distrust, human frailty, and courage are identifiable.”

If you’re a thriller reader, your shelves are stocked with stories that hinge on the threat of world destruction, governments under siege, and massive terrorist conspiracies. Mofina has written his share of stories with global implications (Six Seconds, The Panic Zone, and They Disappeared, for example) but they were all told from the point of view of everyday people, and Mofina says his new novel takes this one step further.

“With LAST SEEN I wanted to narrow the focus,” he says. “[I] wanted to make the drama as realistic as possible with flawed people facing the worst possible situation in their lives.”

Mofina’s work has been praised by some of the genre’s biggest names, and The Library Journal called him one of the best thriller writers in the business. You’d think he, of all people, could tell us the secret to writing a truly great thriller. But…

“There is no secret,” Mofina says. “You must do your absolute best to craft a story that takes readers hostage and does not release them until the last word.”

It may sound simple, but it’s no easy task. Mofina has mastered it—and he does it again in LAST SEEN.

Rick Mofina is a former journalist who has interviewed murderers on death row, flown over L.A. with the LAPD and patrolled with the Royal Canadian Mounted Police near the Arctic. He’s also reported from the Caribbean, Africa and Kuwait’s border with Iraq. His books have been published in nearly 30 countries, including an illegal translation produced in Iran.

The Crime Writers of Canada, The International Thriller Writers and The Private Eye Writers of America have listed his titles among the best in crime fiction. As a two-time winner of Canada’s Arthur Ellis Award, a four-time Thriller Award finalist and a two-time Shamus Award finalist, the Library Journal calls him “One of the best thriller writers in the business.”