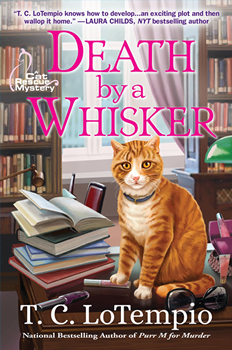 You wouldn’t know it from her lighthearted and clever cozies, but bestselling author T.C. (Toni) LoTempio started out writing horror. After realizing that, with the notable exception of Stephen King, there wasn’t much of a market for horror, she turned her considerable skills toward mysteries.

It seemed a natural progression; while LoTempio neither commits nor solves murders in real life, she has had a lifelong love of mysteries that began with the Nancy Drew classic The Secret in the Old Attic. She began honing her writing skills early as well, changing the endings of her books and comics if she didn’t like how they turned out.

With a bit of uncredited help from her cat ROCCO, she penned the Nick and Nora mystery series for Berkley Prime Crime, followed by the Cat Rescue Mysteries published by Crooked Lane. In true cozy fashion, the books sometimes include recipes, like the one named for Wolverine actor Hugh Jackman and made from horseradish, cheese, and thinly sliced beef on an Italian hoagie bun.

Asked which writers have influenced her writing, she says, “I’ve definitely been influenced from a young age by the Nancy Drew mysteries. I think I’ve read almost every girl sleuth series around, from Trixie Belden to Judy Bolton and everything in between. And I’m a big fan of today’s cozy mystery authors, particularly Laura Childs and Miranda James.”

Toni agreed to chat with The Big Thrill about her new release, a Cat Rescue mystery called DEATH BY A WHISKER.

Thank you for taking the time to talk to us about your new book, Toni. The first time we spoke, your publisher had just released the first novel in this series. Can you tell us a little bit about your writing journey since then?

I’m working on two other cozy series that I’m hoping my agent will be able to sell. And, of course, doing publicity (that’s ongoing) for all my books, plus helping my cat ROCCO write his blog, Cats, Books and More Cats, every week. In addition, I also review cozy mysteries for Night Owl Magazine, and I write their monthly suspense column, Dark Streets.

Wow, you are one busy lady! Let’s talk about your most recent release. DEATH BY A WHISKER features a clever, sleuthing cat. What made you decide to write in this genre?

I had written a paranormal suspense about an allergic vampire slayer and we weren’t getting any bites. (No pun intended.) At the time cat cozies were hot, so I was thinking about switching genres. I was on my couch watching The Thin Man on Turner Classics when my cat ROCCO jumped onto my lap and I started to think: What if Nick Charles got shot and came back as a cat?  And the Nick and Nora mysteries were born from there (although I had to change my original premise, but that’s a whole other story).

The opening of this book puts an interesting and humorous twist on the oft-given advice to introduce the body on the first page. How did you come up with such a clever and attention-grabbing beginning?

My cat Maxx has several catnip mice he’s fond of mutilating, so I just took that little “hobby” of his and made it the opening for the book.

You have two different mystery series, both featuring cats. How are they different?

The cat’s personalities. Nick takes a more active role and is often right in the thick of the action, while Toby is more “the quiet man,” encouraging Syd. I would say Nick has more of a quarterback role while Toby’s is that of head cheerleader.

DEATH BY A WHISKER features a murder victim your readers are going to love to hate. How did you come up with the character of Ulla Townsend?

Ulla’s patterned after a merchant on one of the home shopping channels. I’d often thought I’d like to murder her, so I did so on paper.

You’ve mentioned outlining, but also said you’re firmly in the “plantser” (part plotter, part pantser) category. How do you balance the two?

I find the writing comes easier (and quicker) if I start out with an outline. I used to make them very detailed, but I found that a third of the way in, I’d start deviating from the outline and the finished product didn’t resemble it in the least. So now what I do is a general outline and then as I finish a chapter, I outline the next. When I get close to the end I generally write a sketch outline of how the book will end. I always know my victim and killer before I start, though. I write out a character sketch of each character before I even start to outline.

Do you have any advice for aspiring and pre-published writers?

Keep writing, every day if you can, even if it’s just for an hour. Keep reading and honing your craft and never, ever give up. If it’s meant to be, it will happen.

What’s next? Will we see more of Syd, Kat, and Toby?

I’m hoping so! We are working on it with our publisher, and hopefully we will have good news before long, but 3 and 4 are ready to go. 😊

I would like to thank each and every one of my readers who buy my books, follow our blog and support both Nick and Nora and the Cat Rescue series. I could not do this without your support.

While Toni Lotempio does not commit – or solve – murders in real life, she has no trouble doing it on paper. Her lifelong love of mysteries began early on when she was introduced to her first Nancy Drew mystery at age 10 – THE SECRET IN THE OLD ATTIC. She (and ROCCO, albeit he’s uncredited) pen the Nick and Nora mystery series from Berkley Prime Crime – and the just released Cat Rescue Mysteries from Crooked Lane! The first volume, Purr M for Murder, is out now! She, Rocco and company make their home in Clifton, New Jersey, just twenty minutes from the Big Apple – New York. Catch up with them on her blog and her website.