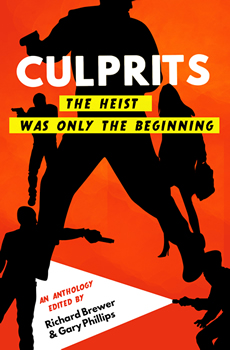 CULPRITS: THE HEIST WAS ONLY THE BEGINNING represents a first for me. It was the first anthology I’d read that reads like a novel. The contributing authors were so attentive to the presented narrative, that each individual story fed into the whole.

The anthology starts out with the introductory chapter that sets up the story and introduces the characters. What appears to be an easy score—seven million dollars in cash found in a slush fund controlled by “an outfit run by business and underworld interests”—ends up with unexpected twists and turns in the heist’s aftermath. From there, each chapter is the story of one of the participants.

CULPRITS is the brainchild of Richard Brewer and Gary Phillips, editors and authors who had just completed an anthology for Jason Pinter at Polis Books. Pinter liked their Occupied Earth and wanted something else from the duo. Brewer and Phillips had a conversation or two “along the lines of that shared world notion, and being fans of the heist story, CULPRITS was born.”

The idea to construct CULPRITS as a novel can be blamed on “all those damn Parker novels by Westlake we were weaned on,” Phillips says. “Not to mention movies like Takers, Rafifi, Inside Man, and the Asphalt Jungle—book and film.”

The authors came on board early. Brewer and Phillips “brainstormed names and their skillsets, ha. Everyone we asked jumped on board. We brought them in even before we’d written the robbery chapter,” Phillips says. “I mean, if you write crime fiction, that almost automatically means you dig a caper set up.”

“As we doped out the concept, we knew the heist would be the first chapter as everything flowed from that,” Phillips says. “As these things go, there would be a hitch, but the crew would pull off the score and scatter to the winds.”

What then happens to each member of the crew afterward? Do reverberations of the robbery catch up to them? Does some other incident from their past come back to haunt them? Or could it be they get involved in some other job that goes sideways?

“We laid the concept on them and provided thumbnail biographies of the characters and their relationship to the takedown. Each writer then picked the character they wanted to portray post-robbery.”

With their writing orders in hand, the contributors quickly got down to business.

“Richard and I knew we’d be writing the final chapter to tie up any loose ends as well as a chapter individually with our character,” Phillips says. “In that way, we used a light touch with the writers—certain things had to be consistent, but other than that, they had free rein to do as they pleased.

“Once the stories started coming in, it wasn’t tough figuring out the order as a kind of rough timeline presented itself in their tales. And if adjustments had to be made, everyone was professional about such.”

The stories run the gamut in both tone and outlook. Some authors presented their characters in a sympathetic light, often creating an interesting back-story to support their point of view. Other contributors used the gritty reality of the crime world to pursue their characters. Some characters lived, others died. With such disparity,  it’s a tribute to the authors that it all works: the characters, the timelines, the events, the outcome.

Typically, one would assume the editing process for an anthology such as CULPRITS would be a difficult task. But according to Phillips the editing was minimal.

“As I said, except for a few matters of consistency, what path the writer chose to take the character they had chosen down was left to them. The contributors took their personality and skillset cues from what Richard and I put down in the heist chapter, and they expanded on that quite adroitly.”

In fact, Phillips says the one thing he discovered or that surprised him the most during this project was “just how good the writers are in our genre.” He calls the chapters “finely etched character studies of men and women under pressure and what they do to get out from under.”

No unforeseen problems arose and Phillips candidly remarks that problems they thought might arise didn’t.

The entire process was fairly quick for the publishing world. Brewer and Phillips sold the idea of CULPRITS to Pinter at Bouchercon in New Orleans in 2016. It “languished for a bit” as Phillips remembers hammering out and getting contracts signed. They didn’t solicit for the collection until the beginning of summer in 2017.

“We pretty much stayed on course on the over-arching plot, which was the heist, and we knew we would have our principal character, O’Conner, taking care of any loose ends,” Phillips says. “The entertainment value for the reader is in the twists and turns, the betrayals, and the portrayals of the diverse set of characters in the telling of the tale.”

Richard Brewer, a native Californian, has always loved stories. Following that love, he has worked as a writer, editor, actor, director, bookseller, book reviewer, movie development executive, and audiobook narrator. His most recent short story, ‘Last to Die’, was included in another anthology inspired by The Boss, Bruce Springsteen, TROUBLE IN THE HEARTLAND, and was noted as one of the Distinguished Mystery Stories of the year in THE BEST AMERICAN MYSTERY STORIES 2015. 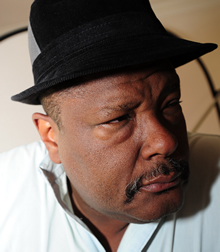