Being popular isn’t the same as being loved. At the exclusive Violet Crab, the club headliner is Carla Rose, a torch singer with a voice as delicious as the rest of her. There’s nothing delectable about the strange, bloated mermaid who washes up under the Santa Teresa pier, wearing seaweed and a red dress, though—and nobody wants to know about Carla’s last swim. She’s all alone.

THE VIOLET CRAB is the third Kahlo and Crowe mystery, following Girls in Pink and Hau Tree Green. This is southern California in the dying days of 1947—ocean breezes and palm trees, the taste of a gin fizz mixed with lavender neon. It’s LA noir, as bright and colourful as today.

THE VIOLET CRAB author, Bob Bickford, sat down with The Big Thrill to discuss his latest installment of the Kahlo and Crowe mystery series:

I hope they have fun. Writing is supposed to be for readers, not so authors can hear their own voices in the mirror.

This is LA noir that stays faithful to the roots of the genre, without resorting to cliche. It’s 1947, written as if it’s today’s date. I want to write the old black-and-whites in high-resolution color.

In the noir vein, I love the old master Raymond Chandler best. Robert B. Parker took the torch from him, and shows how clean, simple writing can be beautiful.

Personally, I love Zelda Fitzgerald, even though there was far too little of her. She captures my sense of romance perfectly. 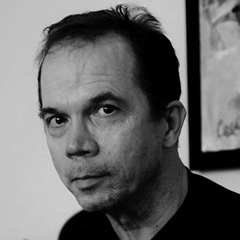 To learn more about Bob and his work, please visit his website.

Life During Wartime by Thomas Pluck