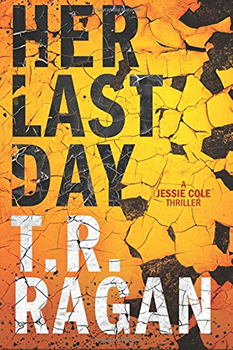 Who doesn’t love a story that starts with a protagonist to whom life hasn’t dealt a great hand? Maybe she’s a bit rebellious and hasn’t quite found her place in the world. Then, when she least expects it, finds her calling and perseveres until she reaches her goal? In many ways, that’s the story of author T.R. Ragan.

Today, Ragan, a once struggling romance writer, has found a home in the thriller genre. HER LAST DAY, which debuted October 24, is Ragan’s 17th published novel, and premiers her Jessie Cole series.

Below are excerpts from an email interview conducted with Ragan for The Big Thrill, which were edited for style and length.

What started you writing 17 novels ago? Is that what keeps you writing today? Or, have you found new/different motivations?

Pregnant with my fourth child and on leave of absence from work, I was bored. My sister handed me a romance novel and instantaneously I was taken to another world. The escapism I experienced was life changing. I knew what I wanted to do with the rest of my life, and I started writing that day.

In the beginning of my writing journey, I wanted to show my kids that hard work, perseverance, and determination would get me that coveted publishing contract. That determination, and also the contest wins and signing with an agent, kept me motivated for many years. My passion for storytelling keeps me writing every day.

It appears that HER LAST DAY is the first novel in the Jessie Cole series. What made this the right time to start a new series?

I always have a fresh story idea floating around in my mind. When I was in the middle of writing the Faith McMann trilogy, I got the idea for HER LAST DAY. It was going to be titled Family Man and Ben Morrison was intended to be the protagonist. By the time I started writing HER LAST DAY, something didn’t feel right. I knew I needed a strong female lead because I wasn’t passionate about the story. Once I added Jessie Cole, I was on my way!

Talk about Jessie Cole. What is it that makes her unique and different from Lizzy Gardner? What surprised you about Jessie as she came to life on the page?

All three of my female protagonists are survivors. Nothing will stop them from searching for a family member or protecting those they love. I believe my established readers will connect with Jessie because her heart is in the right place, and she is determined to see justice prevail.

I have the same set of questions regarding Ben Morrison. In addition, if Jessie is the protagonist, what is Ben’s persona/role?

Ben is special because he is a compassionate being and loving husband and father who was in a tragic accident that left him with amnesia. As horrifying and bloody memories from his past begin to return, he wonders what they all mean. Although I consider Ben to be a strong supporting character in the series, readers could see him as another protagonist. As long as Ben grows and develops, and his obstacles are solidly linked to the plot and theme, I feel confident readers will be satisfied with the resolution.

I also want to ask about Zee Gately. Please talk about the challenge of writing for a single character who has multiple personalities. How did you, as the author, keep them straight?

I like to include characters who are real people with real problems, and that includes people with diseases and mental disorders. Zee Gately, just like 51 million other people worldwide, suffers from schizophrenia, a serious disorder of the mind and brain. The good news is that it’s treatable. Some, like Zee, suffer from auditory hallucinations and they hear voices. Zee hears three distinct voices on a regular basis. It’s easy to keep them straight because one voice is bitchy, one is clever, and the other tends to be a troublemaker.

It seems like fiction has always been a Trojan horse for sneaking real-life issues into a reader’s mind. What do you want your readers to think or feel after reading HER LAST DAY?

I want readers to feel inspired knowing that if Jessie Cole can overcome the crappy life she’s been dealt, so can they. My protagonists are survivors. So are my readers.

While I don’t want to overlook HER LAST DAY, what do your fans have to look forward to in your next book? Can you give us a little insight?

Jessie and Ben will work together on another missing persons case. The main plot centers around a vengeful father who blames the CEO of a large insurance company for his child’s death. After killing two employees, the desperate father kidnaps the CEO’s daughter. Tasked with finding her, Jessie and Ben are running out of time to save her. Meanwhile, Ben is still seeking insight into the man he was before a car crash erased his memories. And each discovery is leading Jessie and him down a frightening road. What they find could scar both of them forever.

My dad left my mom and five daughters when I was eleven. Without much supervision, I became rebellious. When I was fourteen, I had keys made for my older sister’s Volkswagen bug. Whenever the opportunity presented itself, I took the car out for a spin. 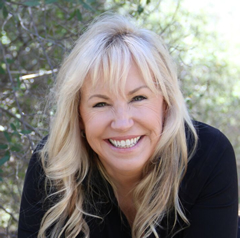 Theresa grew up in a family of five girls in Lafayette, California. An avid traveler, her wanderings have carried her to Germany, Ireland, the Netherlands, China, Thailand, and Nepal, where she narrowly survived being chased by a killer elephant. Before devoting herself to writing fiction, she worked as a legal secretary for a large corporation. Theresa and her husband Joe have four children and live in Sacramento, California.

To learn more about T.R. Ragan, please visit her website.