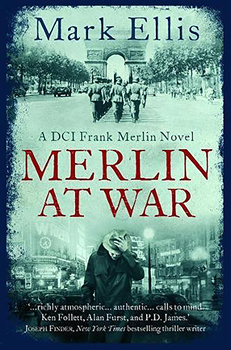 Writing in a comfortable studio surrounded by books, the scenes playing in the mind of Mark Ellis are not nearly as peaceful: German dive bombers machine gunning troops on the run, war-torn London, a woman’s bloody body in a hotel room.

The British author’s latest effort is MERLIN AT WAR, in which much of the plot centers around a mysterious letter left behind by an officer killed by those dive bombers. Interestingly enough, the main character is not a soldier, but Chief Inspector Frank Merlin. While war rages, there is no shortage of home front crimes for Merlin to solve.

And so did crime.

According to Ellis, the wartime blackouts created opportunity for criminals. Looting was commonplace in bombed areas. Rationing gave rise to an underworld of black market goods. He noted that 4,300 cases of looting were tried in just four months of 1940.

It is a side of wartime England that doesn’t quite fit with the “Keep calm and carry on” slogans.

“Police were stretched thin by crimes caused by the bombings,” he noted. He added that the ranks of law enforcement had been thinned when large numbers of police officers joined the military.

“I thought this wartime situation was just a great setting for a crime novel,” Ellis explained. 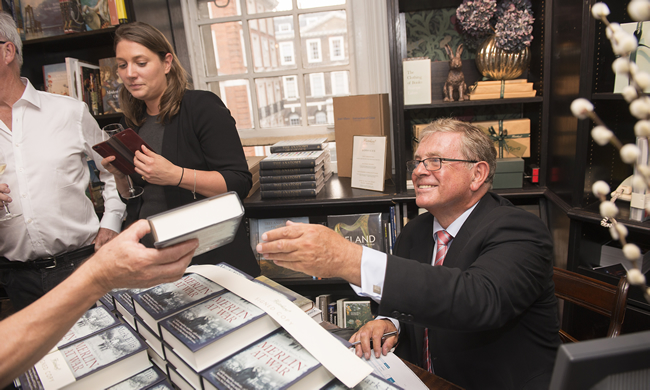 After the sale of his computer company, Ellis found himself with time to write. His initial attempt at developing a crime-solving character proved to be a false start. After a few months of work and a lot of pages, he just didn’t find his original version of the character to be to his liking. It took some ruminating during a trip to Spain to find out who Merlin really was, and to give him some Spanish roots, and thus DCI Merlin was born.

For readers of crime fiction, Merlin is a familiar sort of sleuth, but also original and quirky in his own right. Too old to be in the fight, he nonetheless finds plenty of use for his talents as a detective in wartime London. Merlin is surrounded by an interesting cast of supporting characters, including his Polish girlfriend.

The wartime setting also enriches the story on many different levels.

Ellis explained that his interest in the World War II era comes in large part from his own family’s experiences. His father served in the Navy, where he contracted a chronic illness that resulted in his passing away when Ellis was just seven years old. His mother often shared stories of her own war years, from witnessing the bombing of Swansea near her home, to dance parties in London. Even as the war and the London Blitz raged, life went on.

Like many other writers who set their novels in the World War II era, Ellis has tapped a vein of nostalgia for the excitement of the war years that has cast a long shadow even decades later. It’s as if readers are re-living the memories of their parents and grandparents.

“As things recede in time, people seem to get more interested in what happened then,” he observed.

Beyond his own family’s stories, Ellis’s research involved interviews, exploring locales in the novels, and endless hours of reading.

“I have a lot of books,” he noted, gesturing at shelves that run the length of his studio from wall to wall and from floor to ceiling. Mixed among the reference titles are the novels of Graham Greene and Elizabeth Bowen, two writers for whom World War II was a current event. Ellis said he finds inspiration and insights in those pages.

His research with an eye for unusual history paid off.

“A lot of my readers respond very positively to the details. They love learning about the odd, quirky things that they didn’t know about,” he said.

The writing itself takes time and a process that in the case of the most recent novel involved 23 redrafts. Ellis said that he typically writes 1,500 to 2,000 words each day. “I will not leave the desk if I haven’t written that bare minimum,” he said.

Most of the work takes place in that book-lined studio. “Sometimes I like to go to the library for a change of scene,” he said.

What’s next for Ellis? He’s planning a trip to New York to promote the American release of his new novel.

When asked about his plots, Ellis explained that he is not a meticulous planner. After he gets the book going with maybe half of the book planned out, he said he then tends to let the plot lines sort themselves out. One imagines these plot points like the loose ends of a frayed rope that need to be intertwined.

What’s next for DCI Merlin? Considering that MERLIN AT WAR is set in 1940, it’s likely that there are going to be several more years of war, murder, and mayhem in his future, which should leave Ellis fans feeling pleased. 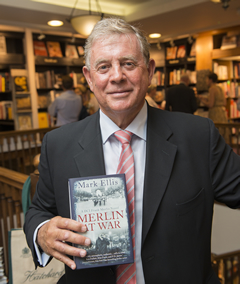 Mark Ellis is a thriller writer and a former barrister and entrepreneur. He grew up in Swansea, under the shadow of his parents’ experience of the second world war. His father served in the wartime navy and his mother witnessed the bombardment of Swansea in 1941. Mark has always been fascinated by World War II and, in particular, the Home Front and the criminal activity which sprung up during wartime. He has written two previous DCI Frank Merlin novels, Princes Gate and Stalin’s Gold and is a member of the Crime Writers’ Association. He divides his time between homes in London and Oxford.