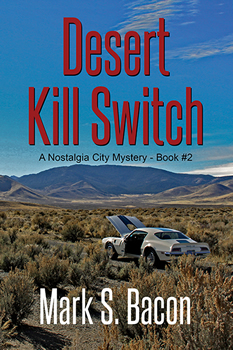 Mark Bacon’s second novel in his popular Nostalgia City mystery series, DESERT KILL SWITCH, takes readers back to the Arizona retro theme park, Nostalgia City—only this time former cop Lyle Deming is in a race to clear the name of his almost-girlfriend Kate Sorensen when she’s accused of murder.

Bacon recently took time out of his schedule to sit down with The Big Thrill and talk about the inspiration behind his new release.

Congratulations on the recent release of DESERT KILL SWITCH. The first book in the Nostalgia City mystery series, Death in Nostalgia City, introduced readers to ex-cop turned cab driver, Lyle Deming. What elements from Lyle’s past have made him the man he is today?

Lyle actually has a reasonably happy life, but one he can’t always fully enjoy due to his anxiety disorder. Hard to tell whether the anxiety was the cause or effect of things that befell him.

As a child, he was constantly in the shadow of his much older brother, and Lyle received the majority of the parental criticism his overbearing father dished out. As a young child, he soaked up much of his brother’s focus on rock ’n’ roll and hot cars, and thus his interests were different from other kids his age.

After college, where he majored in English Lit., and a stint in the army where he received MP training, Lyle tried different jobs looking for a career. Ultimately his choices seemed to come down to teaching English or becoming a cop.  He chose the latter hoping to, among other things, help others.

After Lyle spent years of long hours doing police work, his wife divorced him, but he stayed close to his adopted stepdaughter whom he loves dearly.  As his anxiety levels rose, fueled from his inability to help crime victims—due to his overload of cases—Lyle found himself at odds with two senior officers at the Phoenix PD.  He refused to look the other way when the other detectives manufactured evidence in a case.  For revenge, the other officers accused him of being mentally unstable.  Lyle’s penchant for talking to himself aloud in public seemed to reinforce the other cops’ diagnosis.  Rather than fight the accusations, Lyle let himself be terminated from the department. He’d had enough.  He looked for a far less stressful job.  And he found one driving a cab in Nostalgia City theme park.

You’ve chosen a fascinating setting for your books: Nostalgia City, a theme park that’s a recreation of a small town out of the 1970s. How did you come up with that concept? What are the benefits—and challenges—of creating a present-day mystery set in a replica of the past?

Nostalgia City theme park is a product of several influences.  Early in my career I was an ad copywriter for Knott’s Berry Farm, a large theme park just down the freeway from Disneyland in southern California. Although I generally pounded a keyboard writing commercials, I occasionally worked on special events in the park. I got to know some of the costumed employees and had a daily behind-the-scenes look at how a theme park operates.

So, when I turned from nonfiction books to writing mysteries, I thought a theme park would make a good setting. They’re exciting places where something’s always happening. Visitors come from all over and are usually looking for an experience out of the ordinary. But what type of theme park should I choose?

I wasn’t interested in the rollercoaster parks, and Disney has already exhausted lots of possibilities.

Then I looked around. I live in Reno, Nevada, where the largest special event of the year is called Hot August Nights.  It attracts thousands of people from all over the country who bring restored classic vehicles to town to show off their cars and listen to retro ’n’ rock and roll. Voilà.  A theme park from the 1970s.  Bell bottoms, Mustang convertibles, The Eagles, fondue, peace and love. I built an entire small town from the 1970s in my head, then on paper.

On summer mornings I’m in an Adirondack chair on our backyard deck wearing shorts and a Hawaiian shirt with my laptop on my lap. I’m surrounded by my wife’s flower garden with hummingbirds zipping past my head as I tap the keys.

In cooler seasons—in Reno, at nearly 5,000 feet, that means the other eight months—I’m in my home office. I work at a Mission style desk, contrasting with my twenty-first century computer.  Looking over my shoulder from a window sill is a life-size statue of a black bird. I think it’s a raven, but it could be a crow.

My routine, when I’m in the middle of a book, is to get up early and start writing.  It’s not glamorous.  I don’t wait for inspiration. I just write. Later, I edit and rewrite.

If you weren’t a writer, would you still be creative?

Absolutely. I would study to be either be a painter or a musician. I’m incredibly jealous of them.  Musicians, painters, writers, we all work in the arts. We all seek to create beauty of one sort or another. But artists and musicians can create in public. People like to watch. Have you ever seen a plein air painter working at an art show or watched an artist sitting at an easel beside a stream?  It’s fascinating to see them work—the brush strokes, the selection of color. And of course listening to live music, such as watching a jazz saxophone player get lost in a wild improvisation, is inspiring in addition to being entertaining.

No one watches writers write. You don’t take your laptop on stage. Sure, you can sit in a corner of MacDonald’s or Starbucks and type away, but no one’s paying attention. No one is sighing at that marvelous metaphor you just wrote.

It’s a solitary business.  That’s why writers are lonely and misunderstood.

I like to provide information along with the entertainment in my mysteries. DESERT KILL SWITCH examines, in fictional form, a troubling car dealer practice. Some auto dealers install GPS tracking devices and kill switches in cars they sell to low-income buyers they consider high risk borrowers. Miss a payment—sometimes by as little as a few days—and your car is dead.  Not all dealers use this, but a 2014 New York Times article estimated that two million cars in the U.S. have kill switches.

This seemed a natural topic for a murder mystery. 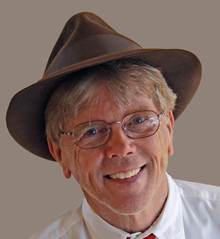 Mark S. Bacon began his career as a southern California newspaper police reporter, one of his crime stories becoming key evidence in a murder case that spanned decades.

After working for two newspapers, he moved to advertising and marketing when he became a copywriter for Knott’s Berry Farm, the large theme park down the road from Disneyland. Experience working at Knott’s formed part of the inspiration for his creation of Nostalgia City theme park.

Before turning to fiction, Bacon wrote business books including Do-It-Yourself Direct Marketing, printed in four languages and three editions, named best business book of the year by Library Journal, and selected by the Book of the Month Club and two other book clubs. His articles have appeared in the Washington Post, Cleveland Plain Dealer, San Antonio Express News, and many other publications. Most recently he was a correspondent for the San Francisco Chronicle.

Bacon is the author of flash fiction mystery books including Cops, Crooks and Other Stories in 100 Words. He taught journalism as a member of the adjunct faculty at Cal Poly University – Pomona, University of Redlands, and the University of Nevada – Reno. He earned an MA in mass media from UNLV and a BA in journalism from Fresno State. He and his wife, Anne, live in Reno with their golden retriever, Willow.