A Dark Page of Family History 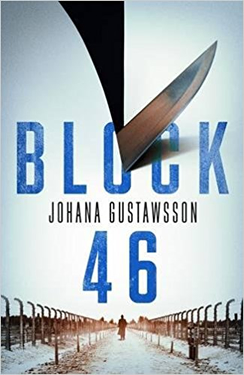 Crime fiction is as popular in France as anywhere else. Without much hard evidence, I’ve always assumed the French approach to the genre was more literary and political in nature. That isn’t necessarily the case, according to Johana Gustawsson, hailed as an exciting new voice in French Noir: “Our approach to crime fiction is a varied as our landscapes—or cheeses!”

I was fortunate to meet the delightful author in May at Newcastle Noir, where she was on a Nordic Noir panel. I wasn’t the only one surprised to discover that despite her name, Gustawsson was born in Marseille. She studied political science and worked as a journalist before turning her hand to crime. She co-wrote the bestseller On se retrouversa, adapted for French television with great success in 2015. And the same year saw publication of her debut solo novel BLOCK 46, which was awarded the prestigious Balai de la Découverte and the Nouvelle Plume d’Argent.

The gripping action of BLOCK 46 moves back and forth between England and the coast of Sweden, where the mutilated body of a jewelry designer is found. Her wounds match those of two young boys murdered in London. French crime writer Alexis Castells joins forces with Emily Roy, a Canadian profiler on loan to Scotland Yard, to track down a ruthless serial killer who may be connected to horrific events that took place at the Buchenwald Concentration Camp in 1944.

BLOCK 46 is a dark and complex hybrid of police procedural, psychological suspense, and historical thriller. Johana Gustawsson balances this feat of high-wire juggling with a combination of raw emotion, harrowing violence, and elegant prose.

When did your interest in crime fiction begin?

My love affair with crime fiction started when I fell head over heels for Hercule Poirot at the age of seven.  In the early 1990s, I moved on to the American queens of crime Mary Higgins Clark, Patricia Cornwell—oh, how much I loved Kay Scarpetta—and Patricia Highsmith, before becoming obsessed with Nordic Noir authors like Henning Mankell. And as for French, I’ve always been a fan of Charles Exbrayat and Georges Simenon, who was Belgian actually—like Poirot!

So the obvious question: Is your “new voice” a French take on Nordic Noir?

Well, I am French and from the South—the ones who talk loudly and with their hands. I have some Spanish blood, or should I say Catalan/Valencian roots. My husband is from Sweden and that means getting contaminated by his Swedishness—which is lovely, except when I see him dip his fish mayonnaise toast in his morning coffee! We live in London and speak English to each other. So I would say that my “new voice” is more European… at the crossroads of all these cultures, which enrich my life as a person and a writer.

Your two female protagonists are the challenging profiler Emily Roy and the more engaging crime writer Alexis Castells. Why two equally important points of view? Do you identify more with one of them?

Drama and tension in a story come from conflict and opposition. And indeed, Alexis and Emily could not be more different. I enjoyed very much having two characters that are so different; it makes their relationship and dialogue so fun to write! To answer your second question, the only thing I share with them is Alexis’ European life setup. I have to admit that I am using my own experience to feed into her!

One of the longest chapters in Block 46 is a cognitive interview Emily conducts with a witness. Where does your interest in forensic profiling come from?

I grew up in a family of psychologists where we even asked “why” when someone had a cold! Everything was, and still is, talked about and analyzed. Forensic profiling is about dissecting behavior, and it completely appealed to me. As a teenager I started reading books by our French criminologist and serial-killer expert Stéphane Bourgoin. An interview he did with South African profiler Micki Pistorius was my inspiration for Emily Roy. She was utterly fascinating!

You mention your family, which I know has a close connection to the historical backdrop of BLOCK 46. Tell us a bit about your grandfather and how his experiences inspired part of the story. 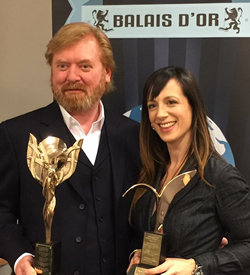 My paternal grandfather, Simon Lagunas, was a member of the French resistance. He was deported to Buchenwald in 1943 and was one of the brave men who organized its liberation in 1945. Sadly, he died when I was a teenager and was never very talkative during family gatherings about those years—despite my endless questions. But, oddly enough, he was a great public speaker and attended many conferences on the subject. My father knew more since he accompanied him to many public events, so it was through my father’s voice that I learned what my grandfather had endured. When I was pregnant with my first son I decided to write about this part of our family story, because what my grandfather experienced had a colossal impact on the father he became: he was a great man, a hero, who I proudly celebrate. But he was a very cold father to my dad, who suffered immensely due to that. Writing BLOCK 46 was very cathartic. It created bridges between my father and his, unexpected ones…

How difficult was researching the Holocaust and avoiding the danger of writing “all too eloquently about the horrors of Buchenwald,” as one character puts it?

I have to admit that researching the Holocaust was quite traumatic. For more than twenty years I had read about the barbarity of serial killers, but diving into the Nazi camps left me broken. So much cruelty, horror, terror, sadism, inhumanity. It was almost impossible to grasp, to understand. Despite that, I didn’t want to make BLOCK 46 too graphic, yet I wanted it to be true to history. Otherwise it would be an insult to the millions of victims, the ones who passed away and the poor souls who got out alive. I worked hard to find a balance between the truth and what was bearable to read. The scenes in Buchenwald concentration camp just scratch the surface of the daily horror. I had to omit so much from the transcripts of the Nuremberg trials, which were the basis of my research. They were soul crushing.

I remember a panel about taboos in crime fiction. No one brought up the Holocaust, but authors agreed that the worst was harming children. You don’t shy away from such controversial topics. Did you ever hesitate?

BLOCK 46 is not about harming children. BLOCK 46 is about harming men, women, and children. BLOCK 46 is about a dirty page of our history. A page we are ashamed to read, that we would like to turn without even having a glimpse. You cannot imagine how many teenagers contact me to say they were absolutely not interested in hearing “the Hitler stuff,” as they put it. But after reading my book, they devoured history books about the period. That’s why I didn’t shy away from history. As far as harming children, it is part of this shameful and horrific page of our world history. Again, why shy away from it? When I wrote BLOCK 46, I had just given birth to my first child, and as any parent knows, there is no greater fear, no greater pain, than losing a child. No greater nightmare. And it made even more sense to talk about those victims of the Nazi camps, to celebrate their memory and their courage. 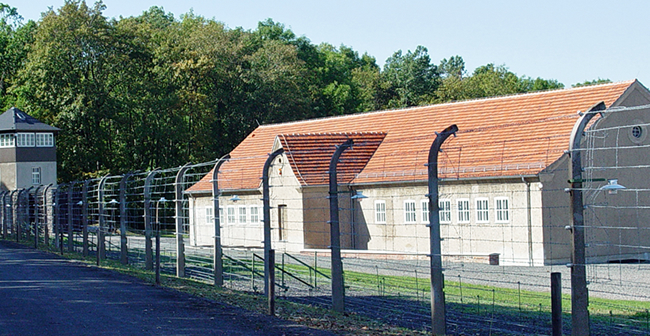 Last question. I know there’s a second Roy & Castells novel already out in French. Will it be published in English? Also, the issue of Catalonia’s independence is currently making headlines. So I couldn’t help but wonder if your Catalan heritage might play into a future story?

The second novel will be out next spring in English! I’m pleased and excited to have just received Maxim Jakubowski’s seamless translation! He is extremely experienced and I was so touched when he told my publisher he would love to translate my books. And you are amazingly perceptive! The third Roy & Castells investigation will indeed partly take place in Spain, where we will be diving into the Franco dictatorship and its terrible female prisons and orphanages.

For more about Johana Gustawsson and her books, please visit her website.