When Greed is Not Good 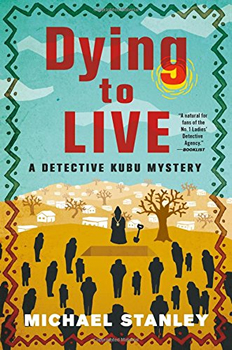 Reading novels is one way to learn about new cultures, new flavors, and faraway places. Take, for instance, the Detective Kubu adventures set in Africa. Of course, the murders are fiction, but all of the settings are based on reality. Michael Stanley is the pen name and combined forces of two authors who enjoy writing together; they make a point of visiting everywhere in Botswana that they write about. Even if the physical details of the location do not appear in the story, the flavor of the place does.

Their most recent book, DYING TO LIVE, opens with the discovery of a bushman’s corpse near the Central Kalahari Game Reserve. The death is written off as an accident. An autopsy reveals that, although the man is clearly very old, his internal organs are puzzlingly young. What’s more, an old bullet is lodged in one of his muscles, but there is no entry wound. Detective Kubu and his brilliant young colleague, Detective Samantha Khama, follow the twisting trail through a confusion of rhino-horn smugglers, foreign gangsters, and drugs manufacturers as the case widens and becomes more dangerous.

Keeping a character fresh is a challenge after six books, the first one dating back to 2008. Interestingly, in A Carrion of Death, Detective Kubu appeared out of necessity to investigate a possible murder, but soon after took hold of the story.

“We try to have him develop from each book to the next so that he becomes deeper and rounder at each appearance. The latter is sometimes physical as well as intellectual!” say the authors. “One of the ways in which we do this is by putting him into different and challenging situations. For example, in the previous book, A Death in the Family, Kubu’s father is murdered. Not only does he have to face the emotional upheaval of his father’s death, but he’s prevented from taking part in the investigation of the case.”

In this new book, in addition to his professional commitments, Kubu faces a serious disruption in his family when his adopted daughter—who was HIV positive from birth—starts to develop an intolerance to her ARV medication. The theme of the book challenges Kubu and his wife, a challenge they negotiate with great difficulty.

The theme of DYING TO LIVE is greed. This is set against the context of a hypothetical plant that can be used to prolong life. That makes it the ultimate source of greed, for who would not want that—and wouldn’t it be priceless? Another important aspect of the story is the bushmen themselves. “They have always fascinated us,” says Stanley. “We’ve read many books about them and visited places where they live. They have a tragic history, essentially having been driven into the semi-desert regions and then hunted like animals in colonial times.”

An important element of any culture is the food, and we see this reflected in the detective’s life. The authors contribute substantially to their character’s diet. “We think Kubu enjoys most of the things we like and rejects things we aren’t so fond of. Bobotie is a delicious South African dish with a Malay background. He loves it.”

The love for food goes beyond fiction as the authors produced a small recipe book covering some of their (and Kobu’s) favorite dishes—both traditional and more adventurous. A Taste of Africa is available at the usual online outlets. “Our readers enjoy trying out some of the food that gets a mention in the novel!” they say.

As for two people writing as one, the process is not that difficult. They both do everything—brainstorming, research, plotting, writing, editing. Usually one will be writing a chapter while the other’s working on another section, then comes the swapping of comments, reactions, and edits. The process goes on, back and forth, for maybe 20 iterations until they’re both satisfied with the result.

“We sometimes say that there really is a Michael Stanley somewhere in the ether who wrote the books,” say the authors. “Neither of us would write the same way on our own. In terms of how the process has changed, we find each book works somewhat differently. We think that we have become more efficient at the process, but then each new book comes with new issues and surprises. Whatever the approach, we always have a lot of fun!”

The next project is somewhat different and will be set around the turn of the century, when Kubu joins the CID, so the theme is really his backstory as a police detective. Then it will feature a major diamond heist from one of Botswana’s richest mines. The current director, Jacob Mabaku, will be assistant superintendent and Kubu’s superior. This prequel will serve the dual duty of showing how the relationship between them developed. “We’re very excited about it!”

Their mystery novels, featuring Detective Kubu, are set in Botswana and have been shortlisted for a variety of prizes, including the CWA Debut Dagger. The third book in the series won a Barry Award and was a MWA Edgar finalist. Their fourth mystery, Deadly Harvest, was a finalist for an International Thriller Writers award.

To learn more about Michael and Stanley, please visit their website.