A Touch of Clairvoyance 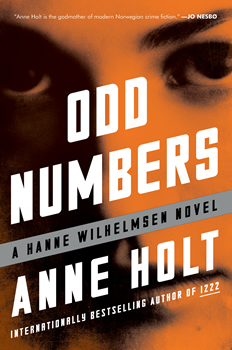 Among Norway’s most popular exports are thrillers written by Jo Nesbø. And yet, English readers had to wait almost 20 years to become acquainted with author Anne Holt, who Nesbø calls “the godmother of Norwegian crime fiction.” Her first book translated into English, 1222, was shortlisted for Edgar, Shamus, and Macavity Awards in 2012, but it was actually her eighth novel featuring lesbian police officer Hanne Wilhelmsen. Holt has also written several standalone thrillers and another series, which follows the duo Johanne Vik and Adam Sturbø. One of these books, Fear Not, was recently adapted for Swedish television as Modus.

Her latest release is ODD NUMBERS, the ninth and penultimate installment of the Hanne Wilhelmsen series. With the explosive start of a deadly bombing directed against the Islamic Cooperation Council headquarters in Oslo, it’s a race against time to identify those responsible before another attack—perhaps during the 17th of May Constitution Day celebrations. Her in-depth exploration into extremism in all its forms gives the complicated storyline a powerful urgency. Not surprising with Anne Holt’s background as a journalist, a lawyer for the Oslo Police Department, and even a brief stint as Norway’s Minister of Justice.

To set the scene, could you tell us a bit about the state of crime fiction in Norway when your first book, Blind Goddess, was released in 1993?

At the time of my debut, Norwegian crime fiction was somewhat vital, though not at all as internationally acclaimed as now. A few male authors, many of them politically left wing, had nourished on the radical Swedish co-authors Sjöwall & Wahlöö for some years—contrary to what was actually the case in Sweden, where the famous duo seemed to cast shadows too dark and long for potential successors for at least a couple of decades. Blind Goddess was an instant success. It became the best selling crime fiction novel of the year. In a way I think it hit a new nerve as a very realistic police novel. At the time I had spent two years as a police attorney and could describe modern police work better than my predecessors. Also, the novelty of a lesbian protagonist was obviously quite intriguing for what would become my growing audience.

Holt with the cast of “Modus,” a recent Swedish TV adaptation of her book “Fear Not.”

ODD NUMBERS introduced me to your highly intelligent, wheelchair-bound protagonist Hanne Wilhelmsen, and I must admit it took me a few chapters to warm to her—let’s say—forbidding personality. Clearly she’s had to overcome a great deal of adversity in the previous eight books, but I sense she was a demanding, even difficult character from the start. Have you ever had concerns about balancing her toughness with the likeability factor?

I put a lot of effort into creating my characters. I want my novels to be relationship-driven, as well as full of suspense. In my opinion, the characters don´t necessarily have to be likable. They need to be interesting, and somewhat intriguing. I have equipped Hanne Wilhelmsen with enough positive features to satisfy this, I think, but you have to balance the good qualities with the flaws. Why? Because this is basic human nature. We are all like that, one way or another. And some of us, like Hanne Wilhelmsen, get less likeable as we grow older. Wiser, though. Much wiser.

Did it feel groundbreaking to feature a lesbian police officer in your story back in 1993? In ODD NUMBERS, it’s no longer an issue. But was it ever something that Hanne—or you—struggled with as attitudes changed over time? Was it ever an issue with regards to book sales abroad?

I’m convinced that the fact that Hanne Wilhelmsen was a lesbian is one of the reasons that the series hit the bestseller list immediately. In many ways I think the Norwegian market was ready for it, as was the Swedish. I’ve never heard any of my agents say anything about this being an obstacle when it comes to the rest of the world market. Although it took some time for me to get into the Anglo-American market, I don’t actually think it has anything to do with this.

At the time it didn’t feel very groundbreaking. To create complicated personalities as your main character is quite common in my genre. I needed her to be somewhat isolated, and this was the way of making her so.

A children’s parade during the 17th of May Constitution Day celebration in Oslo (a possible terrorist target in “Odd Numbers”).

Not surprisingly, authors are taking on the subject of extremist terrorism in greater numbers. But something that distinguishes your story is an uncanny prescience—sadly so. Although you were writing ODD NUMBERS in 2014, events you describe could be ripped from very recent headlines. Does your journalism or legal background account for this? Or are you a crime fiction Cassandra?

Actually my “up-to-date” writing is a technique. As a means to achieve authenticity, and thereby get the reader to identify with my characters and plot, I season the novel with incidents from the real world. As a political human being, very much so, I get my inspiration from the news, from politics, and from every day stories shared with me by friends or through the media. When you´re interested in politics, you obviously try to look ahead: what will this and that tendency/development/change in society lead to, in the short and long term. The joy of writing is first and foremost to fantasize, and I build my fantasies on the very solid ground of real life, actual incidents, and political currents. Unfortunately, I´ll have to say, I have been clairvoyant in more books than I appreciate.  All in all, this part of my writing has more to do with life experience and political interest than with my background as a journalist and lawyer.

Norway’s history of terrorism provides a backdrop to your book, particularly the tragic events during the summer of 2011. But you keenly observe complicated shifts in attitudes since then regarding nationalism, immigration, religion, etc. Are social issues increasingly important to explore in crime fiction?

I would never dare place any imperatives for crime fiction, or any writing for that matter. Quite the contrary, every author must choose to write about issues that are important to them. For me it would be impossible to avoid these issues, as I would be bored to death. Bored authors write boring books.

You refer to the complex jigsaw puzzle of modern surveillance—with the vast number of pieces investigators must put together before a clear picture emerges. Lots of parallels to writing crime fiction come to mind. Also, modern twists on traditional techniques: false alarms replacing red herrings, or the use of media as an unreliable narrator. As the world becomes more complicated, has it changed the way you write your stories?

It depends on what kind of story I’m writing. When I paint on the large canvas, as you might say is the case in ODD NUMBERS, the pace of development and the world at large becomes quite a challenge. Research-wise, for one. But some of my books are more like Elizabethan miniatures. The joy of writing those books is, more than anything else, to be able to indulge in timeless, universal human nature. And skip all the research… 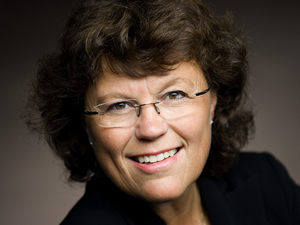 As in most series, a host of return characters are involved in the plot. But most intriguing for me was a new assistant for Hanne’s cold case investigations—the oddly engaging young policeman Henrik Holmes. Full of tics and out-of-the-box thinking, he’s obviously on some sort of spectrum. And yet, he energizes Hanne and the story in an irresistible way. How did you find him? Have you considered making him the protagonist of his own series?

Henrik Holme is actually my favorite protagonist of all my 24 books. I invented him for another novel, the last book in the Vik/Stubø series, Death in Shadow. I loved him so much that I couldn’t resist re-using him in the last two books of the Hanne Wilhelmsen series. Time will tell if I make him the main star later on!

You’ve said that crime fiction novels are the best kind of travel guides—but I don’t think you meant geographically. So how is this true for you?

Writing crime fiction is describing the dark side of a society. What is considered the dark side varies from culture to culture. In the western world murder is considered THE capital crime, where as in Japan I was somewhat surprised to learn their crime fiction is predominantly focused on sex-crimes. Participating in an author delegation from Norway to China in 1998, I was even more surprised to find out (after the Chinese finally admitted to even have this genre in their culture, but only as cheap and not very valued popular “magazines”) that the stories mostly focus on corruption. When I asked who the protagonists usually were, they looked at me very surprised and answered: “The hero is society, of course!”

In other words: Crime novels will always have a universal, human feature (which makes it the most read genre everywhere.) But it will also illuminate the more national, cultural characteristics of any given geographic area.

For more about Anne Holt and her books, please visit her website.