Falling in Love With Mackinac Island 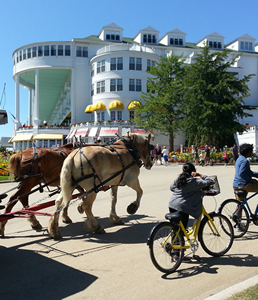 Unlike most of the suspense/thriller/mystery authors I know, who usually get an idea for a book through character or plot, I always begin with setting.  If I can find a place that intrigues me, I’m good to go to create a storyline and characters.  I have done this numerous times and have been inspired to write suspense novels set in Amish country, backwoods Appalachia, and Southwest Florida.  And when I visited unique Mackinac Island in northern Michigan, I fell in love with the setting and the possibilities for a book.

Unique:  No cars allowed on this island; it’s all carriages and wagons.  The police ride bicycles.  Hundreds of horses are imported for the tourist season but are taken off for the winter when snowmobiles, sleds, and skis prevail.  And the island ices in in the winter.  Unless you want to catch one of the few airplane flights ($52 one way), or ride the ice bridge on a snowmobile between old Christmas trees stuck in the ice, you’re marooned.  Ah, a place for a closed room (or island) murder mystery!

A sealed-off island setting implies the enemy is often “us,” someone you know; that’s the kind of books I like to write.  So even though this novel is #3 in a South Shores Series, I made an exception for Mackinac and put a north shore in the series.  In FALLING DARKNESS, the island is the location my characters are placed by WITSEC to hide out be protected from the man who wants to shut them up permanently.  Surely, he’d never find them there…

There are no vehicles allowed on the island.

This island and its huge Grand Hotel, dating from Victorian days, was the setting for the 1979 time travel movie Somewhere in Time, starring Christopher Reeve and Jane Seymour.  The fans (read fanatics) for that movie dress in period costume and hold a convention each year in the vast hotel, just before it closes for the winter, leaving its labyrinthine corridors and rooms to ghosts of the past.

Grand Hotel is pricey with fabulous food and views.  We ate a sumptuous buffet lunch there and toured the hotel, but stayed at another historic hotel, The Island House, which has a great view of the harbor and two lighthouses.  So, of course, that also had to be a scene in FALLING DARKNESS.  We enjoyed the a huge circular veranda and great dining in the 1852 Grill Room.

Islands are, of course, always intriguing.  In season, boats of all kinds anchor or stop by Mackinac harbor, which we approached by ferry.  But an island which hunkers down in the snowy, wintry months without tourists, an island where daily life still seems ‘somewhere in time’ was a place I could not resist, even for a contemporary setting.

I tried to work in as many of the evocative spots on the island as possible in my suspense novel:  Arch Rock (where a murder takes place); skull cave; the fantastic forests primeval; and some of the amazing Victorian era homes overlooking the harbor.

The island is known for its fabulous fudge; the islanders call the tourists “fudgies.”  I loved prowling the small shops and the great indie bookstore there, called, of course, since there is just one, The Island Bookstore.  I stopped in and bought a lot of local color books, which I later used for research in writing FALLING DARKNESS.  The book has the amazing huge formation Arch Rock on the cover.

When I walked off the ferry, I never imagined that Mackinac Island would give me a fabulous setting.  The place is a pleasure to visit and provided me with a treasury of places and people for my story.  Check it out sometime—at least the place if not the book.

Karen Harper is the New York Times bestselling author of contemporary suspense and historical novels about real British women.  A former high school teacher and university English instructor, she and her husband live in Columbus, Ohio.