Writing Books to Be Proud Of 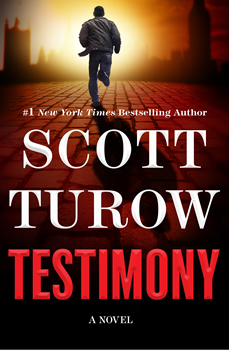 Turow’s new book, TESTIMONY, features all the gripping courtroom drama, shocking plot twists, and compelling characters that the author is famous for. But this time there’s something new: The setting is far away from his familiar Kindle County.

Bill ten Boom, a lawyer and ex-prosecutor, has left Kindle County to start a new life with a job at the International Criminal Court in The Hague–where he needs to investigate claims of a Bosnia massacre of 400 gypsy refugees more than a decade earlier in which American NATO troops are a prime suspect.

“It’s a little more than the standard midlife crisis,” Turow says of the Bill ten Boom character.  “As it turns out, his is related to having found out at age of 40 that his parents and thus he are not completely who he thought they were. That’s the event that has been bubbling beneath the surface for him. He jettisons one thing after another–his marriage, his job, his country.”

“The court was a lot easier,” he explained. “Evidence is evidence…the basic concepts of criminal investigation and prosecution are pretty much the same.”

It’s the 11h novel (he’s also done two non-fiction books) for Turow, who began writing Presumed Innocent on the morning commute to his job as a lawyer in Chicago back around 1980.

“I was doing it in moments stolen from my law career,” he recalls. “I would write every day for 30 minutes—that’s what I had on the commuter train. I would write only on the way in to work. But I wrote every day. Most of the time I thought my life was as a lawyer even though my longtime ambition was to be a novelist.

“There were moments when I was working on Presumed Innocent when I’d sort of get carried away with the thrill of my own story. ‘Oh, God—it’s going to be a big best seller, it’s going to be a movie.’ Then I’d come down from that and think, maybe I can just get it published. To say I had no idea what was going to happen, was an understatement.”

When the book did become a huge success, Turow had some crucial decisions to make – about whether or not to continue his career as a lawyer as well as what type of fiction book to write next as a follow-up. He admits there was a certain amount of pressure to avoid being a “one-hit wonder” as a thriller author.

“I think there was a piece of me that always understood you can’t expect to write Presumed Innocent over and over again. It was a moment in time when there weren’t a lot of other people writing novels about lawyers. I was, of course, really pleased by the success. But I never felt it was my obligation to try to create a book again that was that big a phenomenon.

“My job as I saw it was to write books that I could be proud of. That’s been the goal ever since and it’s gone really well. I leave it to others to judge the body of work as a whole. I’m happy with what I’ve done.”

And, despite all the acclaim he’s received since then as an author, Turow has continued to work as a practicing attorney over the years as a partner in a Chicago law firm, focusing on white collar criminal defense and also devoting much of his time to pro bono cases. He won the Robert F. Kennedy Book Award in 2004 for Ultimate Punishment, his non-fiction book about the death penalty.

But Turow has cut down on his legal work in order to turn out more bestselling legal thrillers. “The percentage of time I’ve practiced law has dwindled over years. A couple of years ago it was a quarter of my time, now it’s less than that. I’m very picky about what I do as a lawyer. I do some pro bono projects…I want to be doing new stuff at this stage.”

Asked why he thought the public loved to read so much about lawyers in his books and other bestselling thrillers (as well as all those popular TV shows and movies), Turow described it as a love-hate relationship.

“There’s a tremendous ambiguity about lawyers,” he said. “It’s true that people hate them, but they hate them for the same reason they admire and envy them— they seem to have extraordinary power.

“It’s hard to name another group of people as widespread in their power as lawyers have. They shape a number of institutions. Every legislative body is dominated by lawyers, courts of course too. Lawyers turn up in all sorts of places. Especially people who graduated from law school, but don’t practice anymore. Lawyers have power, a lot of them are quite successful—and a lot of the deeper moral questions end up being resolved in court. All of that makes lawyers powerful and fascinating.”

So what’s next for him?

“I’ve already started playing around with another novel. The basic notion is of a distinguished scientist who finds himself near end of his life suddenly suspected of some kind of fraud. It’s about watching the work of a lifetime slip away. The way people react to that.”

And, of course, there is a lawyer character in the book too.

“What I’m wrestling with right now is whose point of view do I use to tell the story,” Turow said. “We will definitely be back in Kindle County all the time in this book.”