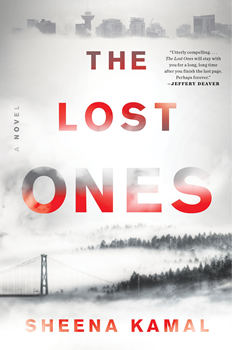 Sheena Kamal is one of the most exciting new voices in crime fiction. Her debut novel, THE LOST ONES (Eyes Like Mine in the UK), is a harrowing, fast-paced thriller that introduces Nora Watts, an assistant to a legal investigator in Vancouver whose personal demons led to her giving up her child for adoption years ago. When the adoptive parents get in touch to tell Nora her now-teenaged daughter has gone missing, Nora must confront all sorts of danger to find her.

I sat down with Sheena to discuss setting novels in Vancouver, balancing humor with thrills, and literary influences.

From Sheena: Hi Sam, thanks for agreeing to interview me! I was very nervous asking you, because I’d seen you on panels and at Vancouver crime fiction events, and was intimidated by your general air of busyness and your height. (I am intimidated by everyone’s height). So I’m very grateful that you had the time to do it–especially since you were recently Writer in Residence at the Vancouver Public Library and just launched your book Invisible Dead in the U.S.

Happy to do it, Sheena! Let’s start with the protagonist of THE LOST ONES, Nora Watts. She’s highly resourceful and tenacious, while also displaying tremendous vulnerability. How did you come up with her?

Nora came to me very organically. I started becoming serious about writing when I worked in the film/TV industry, so what I saw first was a logline about a woman who discovers the daughter she’d given up for adoption has gone missing, and she doesn’t trust the authorities to look for the girl. Who doesn’t trust the cops? Someone who’s had bad experiences with them, an outsider, a loner. Then I wrote a line about her singing the blues and I suddenly got her personality. I sensed she had a huge identity crisis that’s always hovering over her shoulders. Writing the story can be difficult, but understanding Nora never is.

How was it for you creating Dave Wakeland? Did you think about him a lot first or did he manifest on the page right away?

With Invisible Dead, I knew I wanted a protagonist who’d embody some of the old school virtues of classic detective fiction, but who wouldn’t feel anachronistic. I wanted to avoid the cliche of the heroic loner in a corrupt world; in some ways the novel is about Wakeland coming to grips with his own complicity in the social ills he investigates.

For me, the classic detective writers like MacDonald, Chandler, on through Walter Mosley and Sue Grafton, were my literary points of reference. In writing a thriller, were there thriller or crime writers who inspired you? Certain things you wanted to draw from or avoid in the thriller genre? 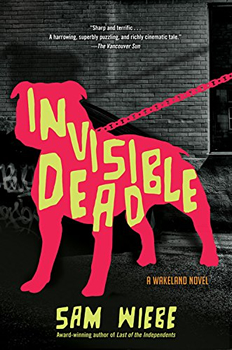 At the time, I was less influenced by the classic authors than I should have been (sorry, I know, I’m going to do better next book, I promise). But if I thought in terms of who I wanted to be like, I might never have done it. For me, the genre mostly helped me figure out what I didn’t want to write.

I remember the last crime fic novel I’d read before starting to write the book, in which the heroine was some kind of male fantasy wet dream. I thought, nah. I didn’t just want to avoid that trope, I wanted it to fall off a cliff and die. I recently read Sara Paretsky for the first time and immediately felt a connection. She probably would have been an inspiration had I read her earlier, but she certainly is now.

What I did draw from the genre is the sense of place and atmosphere that you get in Nordic Noir. The Pacific Northwest lends itself well to moody fiction and I thought I could tap into that.

Let’s talk about Vancouver and the Northwest as a setting. The city is unique in that it’s a colonial settlement on the unceded territory of three different First Nations, and it’s one of the biggest immigration hubs in North America. Yet it also has the same problems as a lot of big cities: gentrification, addiction, crime. Why set THE LOST ONES here?

It was the only option for me, really. When the idea came to me I was sitting in a production office in Toronto, imagining a dark story set amidst the startling beauty of Vancouver. Thrown in was the fact that so many people want to live here and almost nobody can afford to, and the city’s gritty, bleak side.

Plus, the novelty of the city played a large part in drawing me here. It allowed me to get out of my comfort zone as a person and a writer. The local crime fiction community in Vancouver has been incredibly supportive of me, but when I first got out here I knew no one and had to go it alone. It sucked on a personal level, but I think it made the book stronger. Plus, as you mentioned, it’s a complex place that’s grappling with its own identity.

There’s so much here that bears examining, and it can be quite an exciting place to write–as you know, since your books are set here. Why did you choose Vancouver?

I don’t really think it was a choice, at least not a conscious one. Vancouver is the only city I know well, and it never occurred to me to set my books anywhere else.

I’m very ill-informed about “what the market wants,” but after I wrote Last of the Independents I learned there’s a stigma in the publishing world against books set in certain places. I’ve been lucky in that Random House Canada and Quercus USA have both taken a chance on Invisible Dead. Between us and writers like Dietrich Kalteis and Linda Richards, I think Vancouver is becoming a viable setting for crime fiction.

THE LOST ONES is a fast-paced thriller that deals with some serious subject matter, but it also incorporates moments of humor. How do you strike that balance?

It’s interesting that you mention that, because I think Invisible Dead has a great deal of humor in it. It’s part of why I liked the book so much, the sense that Dave Wakeland doesn’t take himself too seriously. It’s an endearing quality.

Thanks. The right tone is hard to strike. Raymond Chandler called it “a lively sense of the grotesque.” THE LOST ONES is awash with great one-liners that establish Nora’s character and comment on her world. One of my favorites is, “When you feel like having an enema without all that pesky shitting, try using the provincial ferry system.”

Oh, man, BC Ferries. I still have nightmares about having to take the ferry to work! That line came from personal experience.

With Nora’s story, I didn’t plan the humor, it came as an extension of her. I would say that humor is how many people deal with pain– and Nora has had a lot of it in her life. So to talk about the pain, I had to give her a sense of humor. A fairly inappropriate one, I must say. It allowed me to not take myself seriously, as well, given that this is my first novel– one that I left my flatlining career in film/TV to write.

You’ve worked in the film and TV industry as an actor, stand-in, stunt double and researcher. How has that shaped your writing?

I’ve been told The Lost Ones is quite cinematic, which was entirely unintentional, but taking a step back I see that it is largely informed by my experiences in the screen arts. I’m also quite into outlining, which is the first step of screenwriting and where my research background comes in. I don’t always stick to my outlines, but they help me find a direction. In addition to that, I’ve taken so many acting classes in the past decade that it certainly bleeds into how I approach character. I think that’s why Nora’s voice is so strong. I owe that to my performance training.

What’s next for Nora Watts, and for you?

Nora’s story will be a trilogy and the sequel will take place largely in Detroit. So I’m finishing up on some edits for that book and then I’m planning the third and final installment of the series. How about you? When can we expect to see Dave Wakeland again?

The second in the series is called Cut You Down. It’ll be out next year. I don’t want to give too much away while I’m in the throes of editing, but I wanted to play with the idea of the femme fatale, and what that might entail in a world where gender and sexuality are a lot more complex. I also wanted to address gentrification, which is rapidly pricing most people our age out of Vancouver.

This was fun. Thanks, Sheena!

Oooh, that sounds exciting. I can’t wait to read it. Thanks, Sam!

Sheena Kamal’s THE LOST ONES is out July 25, 2017, from William Morrow, and was released in the UK this February as EYES LIKE MINE.