The Key to Writing Killer Suspense 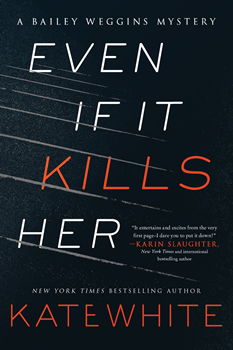 Fans of Kate White’s popular Bailey Weggins series will be thrilled to know that after five long years, the character is returning in a seventh novel, EVEN IF IT KILLS HER. This time, Bailey sets out to find the killer of her college roommate’s family. Plagued by guilt that she wasn’t there for her friend after the brutal murder 16 years ago, Bailey goes back to the scene of the crime and begins sleuthing around town. It isn’t long before secrets are unearthed, feathers are ruffled, her life is put in danger, and Bailey must decide how much she’s willing to risk to find out what happened that terrible night.

“I really did miss Bailey, and I was always planning to bring her back,” White said. “But I got sidetracked writing standalones and let those five years go by without a Bailey mystery.” A former editor-in-chief of top women’s magazines and author of several best-selling career books, White sees it as her own lesson learned. “In my career books, I always advise people to be the relentless architects of their careers and to frequently step back and analyze if they’re in the right place, doing the right things. I followed my own advice in my magazine career, but I probably wasn’t as good at that task in the course of writing mysteries and thrillers.”

Readers are sure to forgive her. The story has the same light-hearted humor, twists, cliff-hangers, and red herrings that are hallmarks of the series. And who wouldn’t want to hang around with Bailey Weggins? She’s strong, smart, sexy, with a bit of snarky and badass thrown in. “I’ve loved creating Bailey,” White says. “She’s a little bit like me, but in many ways, she’s not. She’s a freelance true-crime writer who loves the independence that affords her. And she doesn’t relish dealing with bosses. She kisses butt about as well as a blowtorch.”

White says she has lived vicariously through Bailey’s independence. “I admire anyone who has the courage to go solo, but I was never enough of a badass to pull that off when I was in the magazine business—until I left my job five years ago to write full time.” Those early years were fulfilling but tough: raising a family, writing a slew of books, and working as editor-in-chief of Cosmopolitan for 14 years, where she brought the magazine to the number one spot in circulation.

“I wrote my first eight novels while running Cosmo, so I had to be pretty disciplined.” Her first priority was her family, so she had to carefully manage her time. White has plenty of advice for other writers who hold down nine-to-five jobs, and she says the first step is figuring out when you’re in the most creative ‘zone’ and only write then.  “I tried to write at night after my husband and kids were in bed. But I could barely produce a sentence. So, I switched to early in the morning before everybody got up, and that really worked for me.”

White says it’s important to write every day, even if you have another job. “It keeps the momentum going.  So, block out the time on your calendar and stick with it, no matter what. The big mistake I hear people with full-time jobs make is saying they’re going to take a week’s vacation, and write then, or devote the summer to it. No, write every damn day, even if you only have ten minutes.” She advises writers to do whatever it takes to “keep your butt in the chair.” For White, that means a big empty writing surface, instrumental music playing in the background, a scented candle burning, and a mug of Ceylon tea.

As a champion of twists and red herrings, White says the key to successfully throwing readers off track is by plotting. “For me, the biggest thrill is when a reader says, ‘I didn’t figure it out but I should have’, which means I tricked him or her, but fair and square. You know what helped me learn to create red herrings? Reading a few books on magic. Those books taught me about misdirection, forcing the audience to think the trick occurred over here when it really occurred over there, or thinking it’s occurring now, when you really hid the scarf 15 seconds ago. And misdirection is what red herrings are all about. Readers are always looking for clues, so even something small can be used to fool them.  Something as simple as having a character hang up quickly from a call can make a reader suspicious even if the call is actually meaningless.” 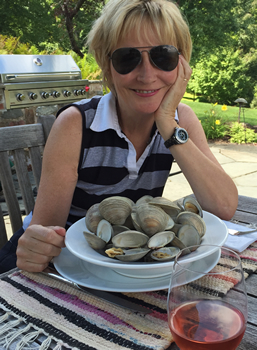 White spent a good portion of her life empowering women through best-selling career books and women’s magazines, helping them to balance their life, gain confidence, and break barriers, and she has no plans to quit. She says that women have made progress for sure, but there are still many hurdles. “Look at the president’s cabinet. There are four women! And the least powerful seats. And though Beyoncé may sing about women ruling the world, the company that makes and markets her fragrance has only one woman on its board and one woman in its executive ranks.  I do, however, sense a wonderful commitment and energy on the part of women today, to really go for what they want and speak out when necessary. Twenty-three years ago, I wrote a bestseller called Why Good Girls Don’t Get Ahead but Gutsy Girls Do, and it’s being released next April totally revised and in handbook form. The Gutsy Girl Handbook. It’s loaded with strategies. It feels like a good moment to offer women that kind of guidance.”

Despite everything on her plate, White isn’t going to wait another five years to thrill her fans with the next series novel. “I’m just finishing another Bailey Weggins mystery, and have another one due after that. I hope she doesn’t get sick of me! I’m also planning another standalone. I believe doing both helps you stay fresh with each genre.”